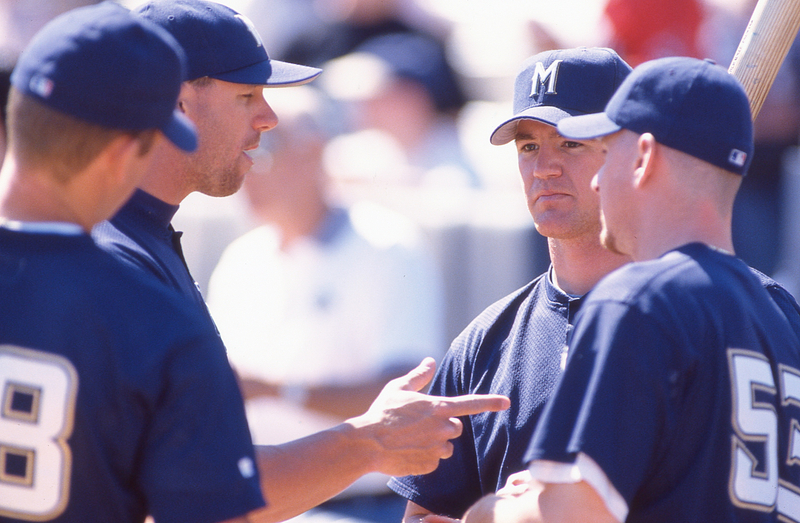 MLB brawls occasionally occur between teams during games, but what about fights between teammates? It turns out that there have been plenty of altercations between teammates in the dugout and clubhouse during Major League Baseball games. Here are some of the best and recent MLB teammate fights.

During the 2019 season with the Pittsburgh Pirates, Kyle and Felipe got into an altercation about music. The two players sustained multiple injuries during the fight in the clubhouse, with Kyle Crick needing season-ending surgery on his hand from the battle. The team fined both players for their actions.

Both Jonathan Papelbon and Bryce Harper were teammates of the Washington Nationals back in 2016. During a game in August, Papelbon did not appreciate Bryce Harper not running out a fly ball from the dugout and began yelling at him as he was walking towards the dugout. The two began arguing in the dugout, and Papelbon grabbed Bryce Harper by the throat and slammed him into the wall. Their teammates in the dugout immediately ran to break up the fight between the two.

Aramis Ramirez and Carlos Silva were teammates of the Chicago Cubs in 2011, and their beef took place in Spring Training. During a spring training game, Silva gave six runs in the first inning, which led to a fight between him and the third baseman (Ramirez) in the dugout. The battle between the two players did not last, but it had permanent damage to Silva’s career. The Chicago Cubs cut Silva before the end of Spring Training.

Chone Figgins and Don Wakamatsu were teammates of the Seattle Mariners in 2010. During a game in the regular season, Chone Figgins struggled at the plate, so manager Don Wakamatsu sat him. During that game, Chone confronted the manager in the dugout, and the two began shoving each other. The words between the two continued in the press after the game.

Evan Longoria and B.J. were teammates of the Tampa Bay Rays in 2010. During a game at Tropicana Field against the Arizona Diamondbacks, Evan Longoria confronted B.J. Upton in the dugout for not running hard after hitting the ball. The confrontation led to both players shoving each other in the dugout.

Kevin Youkilis and Manny Ramirez were teammates on the Boston Red Sox in 2008. During the 2008 season, while trying for a World Series repeat, the team had an internal struggle between teammates in the dugout at Fenway Park. Kevin Youkilis would become agitated and animated in the dugout after striking out, so Manny Ramirez confronted him to tell him to knock it off. Soon after the conversation began, both players were shoving each other in the dugout, and players had to separate the two.

Matt Garza (a pitcher) and Dioner Navarro (catcher) were teammates in 2008 for the Tampa Bay Rays. After Garza gave up a home run to the Texas Rangers, Dioner came to the mound to talk to Garza, which led to the team shoving each other. After the inning, both players resumed their fight in the dugout and clubhouse. Dioner Navarro claimed that the battle took place because Matt shook off two signs, and then gave up a home run to the hitter.

Prince Fielder and Manny Parra were teammates of the Milwaukee Brewers in 2008. During a game in August at American Family Field, both players began yelling at each other in the dugout, which resulted in Prince Fielder attacking the pitcher. Later on, Price Field apologized to the team and media after the two players’ incident.

During a game with the Atlanta Braves vs. Chicago Cubs at Wrigley Field on June 1, 2007, tempers began rising between the starting pitcher on the Chicago Cubs. Carlos Zambrano, who was the pitcher, got into a heated conversation with the catcher, Michael Barrett, in the dugout. Both players shoved each other in the dugout, but they also continued the fight in the clubhouse. After the battle in the clubhouse, Michael Barrett went to the hospital, but the two smoothed things out between them after the incident.

Jeff Kent and Barry Bonds were teammates of the San Francisco Giants in 2002. During a game against the San Diego Padres, both players were yelling at each other in the dugout when things took a dramatic turn. Barry Bonds pushed Kent into the wall, and teammates had to separate the two from each other immediately. Rumor has it that these two players had many scuffles, but this was the most televised altercation between the two.

El Duque and Jorge Posada were teammates together on the New York Yankees in 2002. During a game against the Baltimore Orioles, El Duque (a pitcher) issued a balk. The umpire warned Jorge Posada (catcher) that Orlando Hernandez will receive another balk for doing that on the mound, but Posada never gave the warning. A few days later, playing against the Chicago White Sox, Posada said something to El Duque in passing, which led to the two to scuffle in the clubhouse.

Matt Mieske and Mitch Meluskey were teammates on the Houston Astros back in 2000. During batting practice in June, Meluskey missed his spot to bat, so he tried to take Mieske’s place. Matt Mieske did not want to give up his spot to hit, so the two started fighting each other. Meluskey threw a hard punch into the face of Mieske in front of their teammates, so everyone had to break up the two from each other.

Lou Piniella (manager) and Rob Dibble (a pitcher) were teammates on the Cincinnati Reds in 1992. During the season, Piniella told the media that the reason why Rob struggled with pitching was from a sore shoulder. Rob confronted Piniella and called him a liar, which led to both teammates shoving each other.

Keith Hernandez and Darryl Strawberry were teammates on the New York Mets team and had their fight during team photo day. During the photoshoot, both players began shouting at each other, which led to Darryl Strawberry throwing a punch. Strawberry complained about his contract throughout the season, so Keith confronted Darryl about that, and the rest was history.

Steve Garvey (first baseman) and Don Sutton (a pitcher) were teammates on the Los Angeles Dodgers in 1978. During the 1978 season, Sutton made remarks to the media about Garvey that rubbed him off the wrong way. After the interview took place, Steve confronted Don at his locker to ask if the quotes were accurate, which Sutton replied yes. Both players then went after each other in the clubhouse, which needed separation from their teammates.

Billy Martin and Reggie Jackson were on the New York Yankees in 1977 and had a complicated relationship. During a game at Fenway Park against the Boston Red Sox, Billy Martin replaced the outfielder (Reggie) for not running down a fly ball. As Reggie Jackson got to the dugout, Billy Martin was there to yell at him, which led to a scuffle between the two. While there were no punches thrown at each other, both players continued to have a stressful relationship.

Reggie Jackson and Billy North were teammates of the Oakland Athletics back in 1974. In the visiting clubhouse in Detroit, superstar Reggie Jackson and the outfielder, Billy Martin, got into a scuffle where their teammates tried to separate them. Things got so bad between the two players that the Oakland Athletics catcher sustained an injury while trying to break up the fight.

Hall of Famers Elmer Flick and Nap Lajoie were outfielders on the Philadelphia Phillies in 1899. The problems between the two players began in the outfield, where they felt like each was approaching their territory to catch balls. The tensions boiled over when they could not figure out what bat belonged to who, so they began trading punches. The fight between the two players was so severe that Lajoie broke his thumb and was out for five weeks.

Throughout the history of Major League Baseball, you have seen plenty of brawls between teammates for various reasons. Some reasons pertain to a teammate not appreciating their teammate not running hard, while others boil over from a player’s comment to the media. While most of the altercations occur in the clubhouse so TV cameras can’t document it, sometimes you will see dugout fights between teammates.

Why is there Fighting in the NHL

Why Do Baseball Players Pee on their Hands