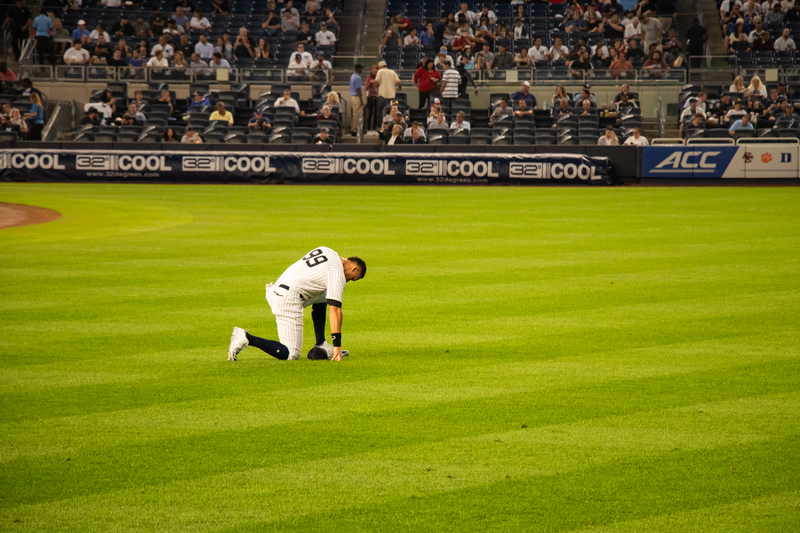 “All Rise, Here Comes the Judge” is a saying by Yankees radio announcer, John Sterling, for the Yankee’s right fielder, Aaron Judge. Aaron Judge made his MLB debut on August 13, 2016, and quickly became the face of the Yankees team after that. From his stellar defense in right field to his moonshot home runs, Judge is universally known throughout baseball for his larger than life persona. Judge stands at a whopping 6’7,” making him one of the tallest guys in baseball. If you are curious about who the shortest MLB player was, you can visit that link.

What are the Judge’s chambers?

The Judges Chambers are a section of seats out in the right field outfield next to the bleachers. The cheering section looks like a jury box with faux wood paneling, so the part within the ballpark stands out entirely from others. The jury box is three rows of seats, and it’s directly in the back of the right-field seats. Each time when Aaron Judge comes up to the plate, you will see this section “rise” in honor of the slugger. The outfielder also enjoys saluting the crowd when he is out in the field playing defense.

Where is the Judge’s chambers in Yankee Stadium?

The Yankees have used Social Media contests to give away tickets to this section in the past. Back in 2018, Yankees fans would enter the content by tagging #MyJudgesChambers in their tweet to the New York Yankees. From there, nine fans would be selected to win, and each receives one guest pass.

When Did this Rooting Section Open?

The Judge’s chamber out in the right field (next to the bleacher creatures) made its debut on Monday night on May 22, 2017, against the Kansas City Royals. 2017 was the first full season for Aaron Judge as a rookie, so it’s impressive to have a staple section in the Bronx ballpark. Since the opening of this section, Yankee Fans continue to flock this area each home game with sell-outs each time.

Another reason for opening this section was to make Yankee Stadium more fan-friendly. One complaint of the New venue is the lack of new tradition, affordable seats, and fun family sections. Since 2009, the Yankees continue to engage their fans and create a more friendly atmosphere. By having a section where fans get to wear black robes and cheer on their favorite slugger makes coming to the Major League ballpark that more fun.

What Did Aaron Judge Initially Think?

“I was shocked, you know I was surprised,” Judge said. “I think it’s going to be a pretty cool idea that the fans will like. It will be something the fans I really think will enjoy.” Quote taken from this source from Timesleader https://www.timesleader.com/sports/mlb/659697/all-rise-the-judges-chambers-in-session-at-yankee-stadium

Being a rookie for the New York Yankees is one thing, but having a rooting section named after you is another. Aaron Judge made a splash in his Major League debut by hitting a home run, and the magic continued during his full rookie season in 2017. During the 2017 season, Judge hit 54 home runs, had a .284 batting average, and drove in 114 runs. Hitting 54 home runs was a New Yankees rookie record, surpassing Joe DiMaggio’s record of 29.

In addition to those numbers, Aaron made the All-Star team, was second in AL MVP voting, the Silver Slugger award, and won Rookie of the Year. Not to be outdone with already a stellar year, Judge put on a show at the Home Run Debry in Marlins Park. Judge won the Home Run Derby that season and made his name known to everyone around baseball.

Do the Yankees Give you Judge Outfits to Wear?

Fans sitting in the chambers get wigs, signs, Styrofoam gavels, and black judicial robes on game day. The chambers group likes to wave their foam gavels up and down when Aaron Judge does something big during the game. Fans also bring their signs to the stadium with words like Judgment Day to take advantage of the section.

In addition to sitting out in that rooting section, Sotomayer has a history with baseball. During the baseball strike, Sotomayer helped end the eight-month MLB players strike with a temporary injunction. Many people call her “the judge who saved baseball” for what she did during the strike. In addition to that work, Sotomayer also threw out the first pitch at a Yankee game.

Has Anyone Hit a Home Run into the Judge’s Chambers?

Aaron Hicks, back in 2017, launched a home run into the Judge section in the right field.

Catching a baseball game at the ballpark in the Bronx is always special. Yankee Stadium, out in New York City, has many different sections for fans to visit. Some popular sections include the Jim Beam Suite section, Mohegan Sun Sports Bar, and Audi Club to name a few. The jury box out in the right field is truly special, and wearing Judge’s robes with Yankees fans is fun. Chances are you will be on TV if you are sitting in this section.

Fans looking to visit the ballpark in the Bronx should check out the Yankee Stadium parking tips.