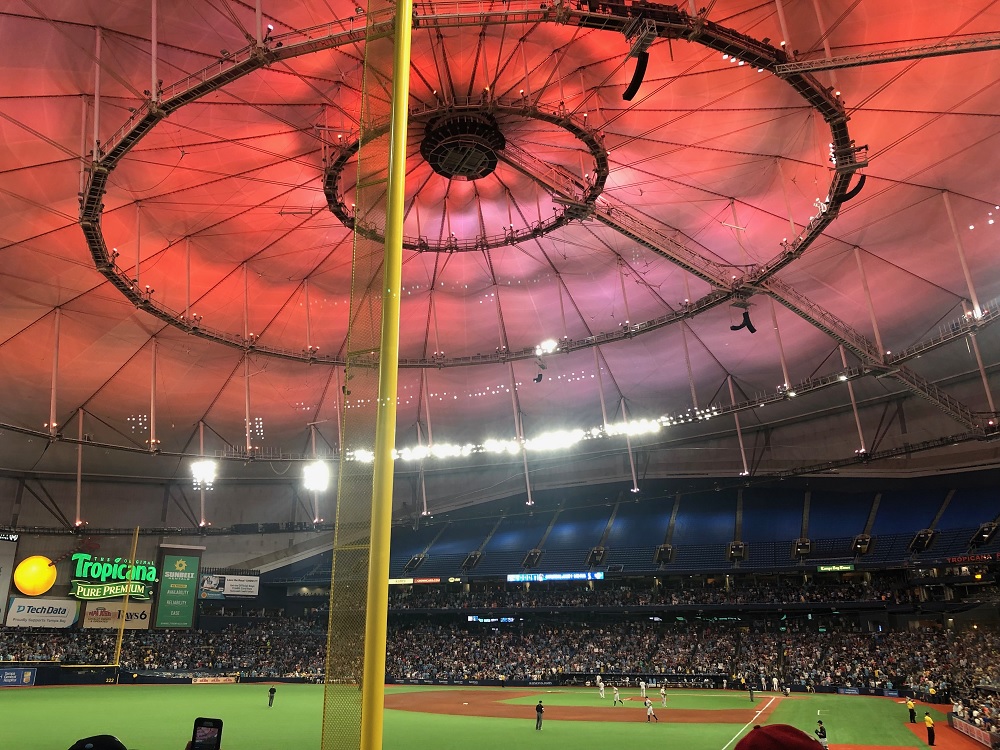 Why is Tropicana Field a Dome?

The City of Tampa was looking to attract Major League Baseball talent to their area in the ’80s, so a multi-purpose stadium was built with a seating capacity of 45k to accommodate a team. Many designs (from HOK Sport) took place to mimic Kauffman Stadium‘s open layout for the Kansas City Royals, but the dome was necessary to attract a Major League team due to the area’s weather. Doors opened at The Trop (known as Florida Suncoast Dome) in 1990 out in St. Petersburg, Florida, in the hopes of attracting an MLB team. Teams that Florida was looking to draw were the Chicago White Sox, Seattle Mariners, and San Francisco Giants, but those plans were not proving to be successful.

In 1993, Tampa lost out to Miami (Florida Marlins) for baseball, so the Tampa Bay Lightning NHL hockey team played games at the venue for a bit, and the named changed to The Thunderdome. In 1995, the City of St. Petersburg was awarded an expansion baseball team in the American League, so the next three years were set to make this an official Major League Baseball ballpark. In 1996, Tropicana Products signed a 30-year naming rights deal with the Devil Rays to put their name outside the new ballpark.

The weather outside the City of St. Petersburg has hot summers, thunderstorms, and hurricanes, so a dome was the only solution to keep baseball comfortable. A dome setting meant that no natural grass could grow in the outfield, so AstroTurf was initially installed, but was replaced with Field Turf in 2000. The outside of the new stadium had a noticeable tilt in the roof that everyone could see from far away. Many people would ask, “Why is there a tilt in the roof” as that was such an odd view to any other MLB setting. For example, you had the Metrodome as a dome-baseball stadium at that time, so the sighting was strange to the say the least.

Why is Tropicana Field’s Roof Tilted and Slanted? 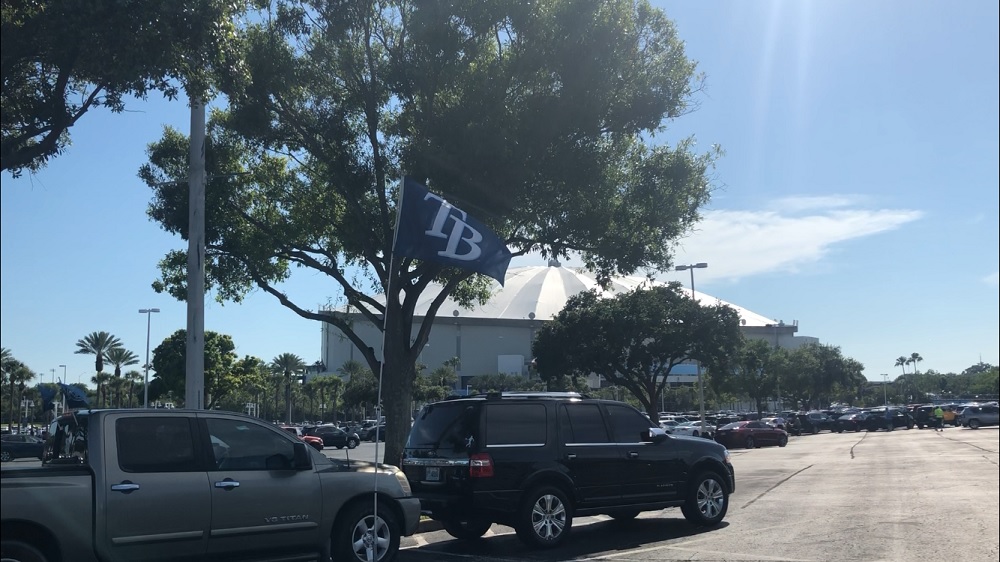 The Domed Stadium for the Tampa Bay Rays had a slanted roof for two primary reasons. The first reason was to protect the structure from hurricanes that would hit the area consistently. Strong winds would be able to glide down the angle of the roof instead of causing significant damage to the top structure. The second reason for a tilt in the roof was to reduce the cost to cool down the venue for events and baseball home games.

Does the Slanted Roof at Tropicana Field Cause Problems For Major League Baseball Games?

There are four catwalks (A, B, C, and D) that hang over the playing field at The Trop. The A Ring and B Ring is closest to the infield while D Ring is out in the outfield. With the roof tilting in the outfield, you have the catwalks at a lower height. That means a baseball will occasionally hit one of the catwalks and then fall back into play. When a ball hits the C or D ring, you automatically have the ruling as a home run. The last occurrence of someone hitting the D Ring took place in 2008 with David Ortiz. Outside of the catwalk, the Minnesota Twins had a player hit a ball off the speaker hanging from the roof.

A more frequent issue is when a player pops the ball up over the infield and hits the catwalk. Baseballs will strike Ring A on occasion, then fall in a different part of the field. Before 2010, any ball that hit Ring A or B would still be in play no matter what. After 2010, MLB now has a rule stating any ball that hits either ring will be a dead ball.

Do the Catwalks Cause Obstructed Views for Fans? 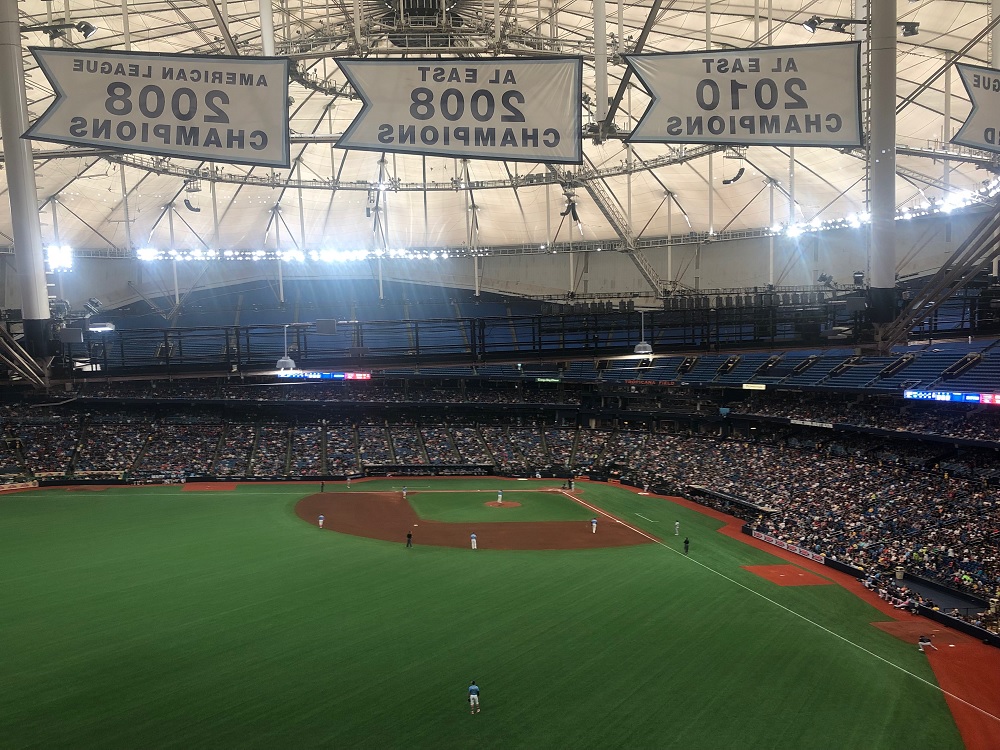 Starting in 2019, the Rays (for the first time) closed their upper deck to “improve” the fan experience. Economics of small crowds coming to the venue each night was another reason to close the upper deck. With the stadium not meeting capacity most nights, The Rays were losing money paying staff in the upper deck to sell to less fans. Finally, removing the upper deck makes the average ticket price more expensive to watch a baseball game now. The Rays made open their upper deck in the 2019 playoffs due to high-ticket interest however.

Is the Dome Removable at the Venue?

Many fans wonder whether the dome is removable at Tropicana Field. The Bleacher Report wrote a great article about how embarassing the roof and catwalks are to the game. The answer to removing the dome is that the roof structurally keeps the stadium intact, so replacing it would be challenging. The weather is too harsh for a roof-less stadium, but adding a retractable roof would be too costly. The next obvious answer would be a new stadium for the Rays.

What is the Venue’s Future? 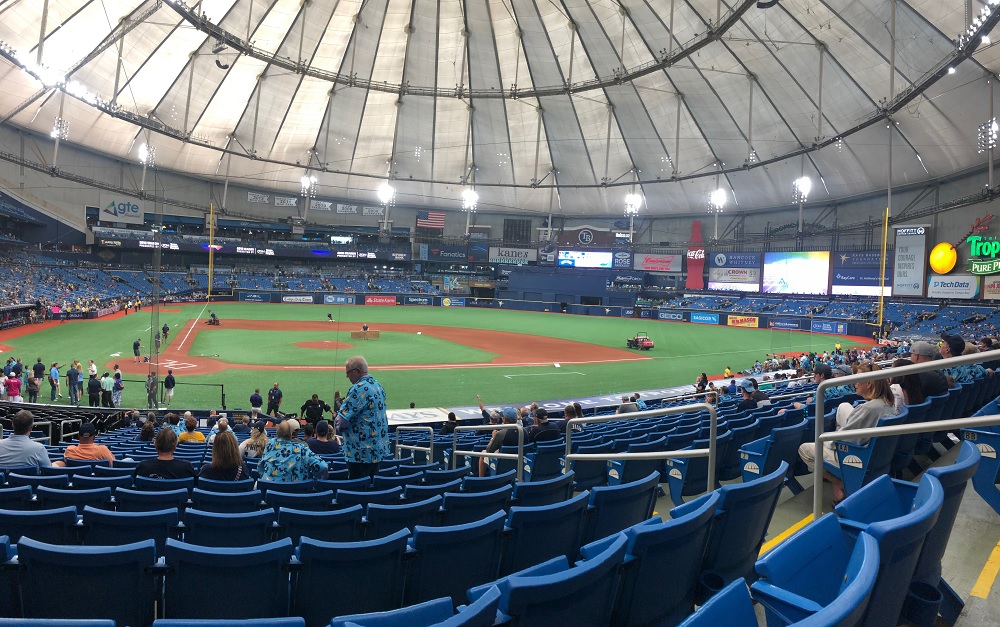 There have been many complaints by both players, fans, and media about the stadium. With the catwalks causing obstructed seats, balls hitting rings, and how far away the venue is from Tampa, you’ve had calls for a new stadium. Most recently, The Rays were looking to move out to Ybor City to build their new stadium. After scouting out areas and trying to work out a deal with the City, plans fell apart. As of May 2020, the Rays will continue to play baseball out in Tropicana Field through 2027 . After 2027, the Rays have the right to move anywhere they want. The Rays can move out of Florida if they can find another state to take them as a franchise. Fans can check out the article by DraysBay where they cover all the Rays moving details.

For Now, Fans Should Embrace the Quirkiness of The Trop

Tropicana Field is not a dump of a facility, as many people will believe. Sure, nobody likes the roof, but the roof does come in handy when it is raining or scorching hot outside. The Rays organization has made many substantial improvements to the facility to improve the experience over the years from 1998. 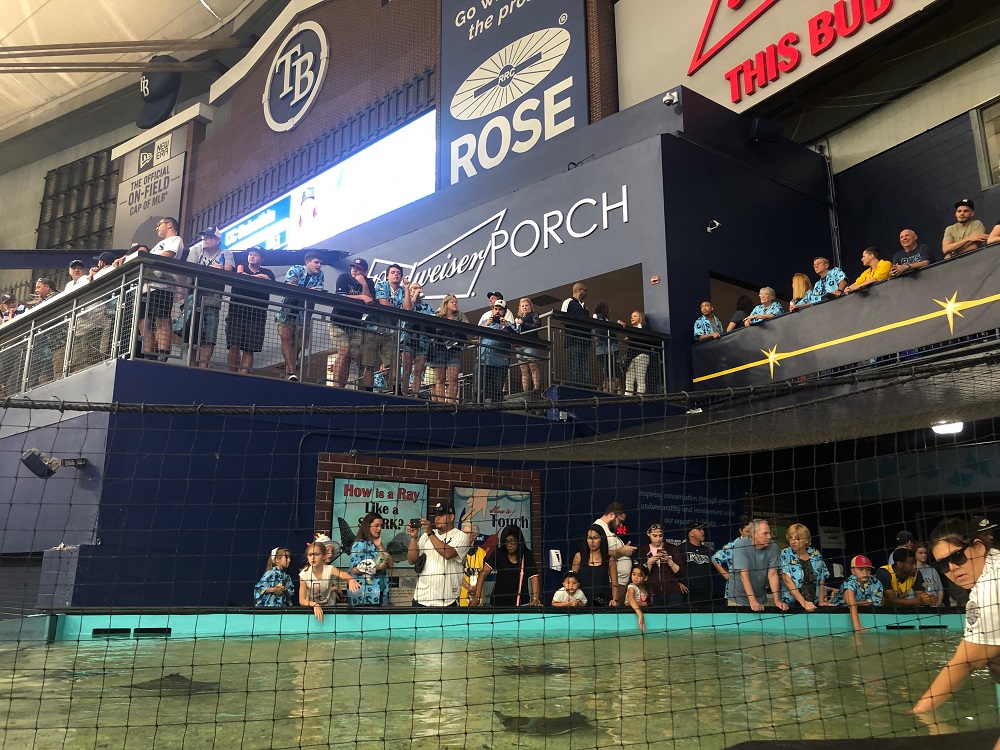 Some excellent additions to the venue include The batter’s eye area in the center, The Hitters Hall of Fame area, the Ted Williams Museum, and removing the bullpens from the outfield to bring fans closer to the action. The stadium also has a nice cigar bar, a rotunda entrance to play homage to Ebbets Field, and new LED lights to give the stadium a new look for fans and players to enjoy. Finally, the Rays Tank above the Right Field wall and Scout Seats behind home plate continue to be fan favorites. In addition to baseball games, the Trop hosts college football games, NCAA matches, concerts, and many events.

Why Tropicana Field has a tilted roof makes sense once you understand the weather patterns in Florida. It may look weird from the outside, but the quirkiness of the site gives the stadium character. If you are looking for Tropicana Field Parking tips, you can visit that link. Multiple parking lots surround the stadium, so it makes parking at the event straightforward.

Finally, here is a video of my experience going to The Trop in 2019. Checkout the guide to the Tampa Bay Rays mascots as well.