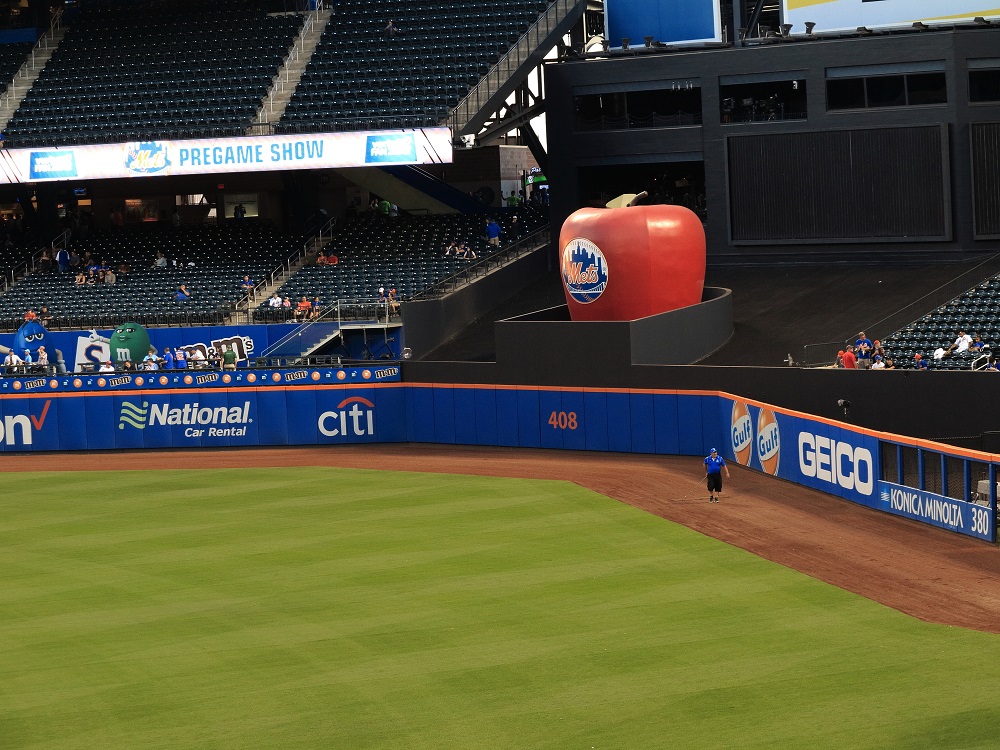 New York City has numerous nicknames that make the city stand out from others. Nicknames of the town include The Empire City, Gotham, and The City That Never Sleeps, to name a few. One other nickname that the city holds is the Big Apple.

What began as an ad “Big Apple” campaign in 1971 to attract tourists became how people would refer to the town. The New York Mets Major League Baseball team brought that “bigger than life” apple into their ballpark as well. Here is the history of the New York Mets Home Run apple.

What MLB Ballpark Has the Home Run Apple? 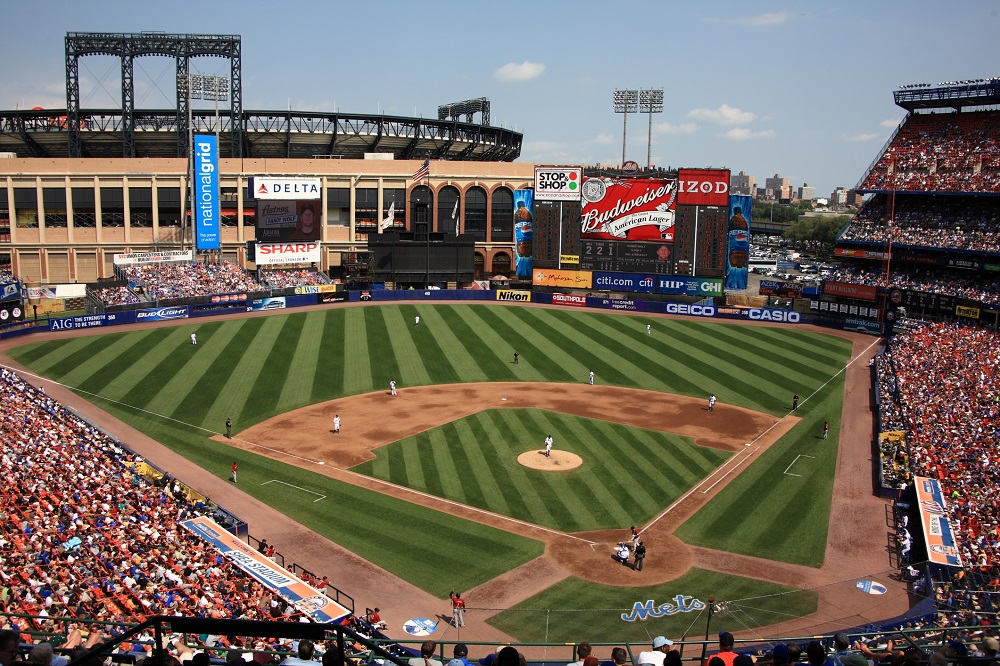 When Citi Field became the new New York Mets home, a New Apple was built (much larger) and went beyond the Center Field wall. The original Apple from Shea Stadium sits outside Citi Field, so many Mets fans take photos with it before entering the venue. Both apples have the New York Mets logo on it, but the new apple is double in size.

Where Do the NY Mets Play Baseball? 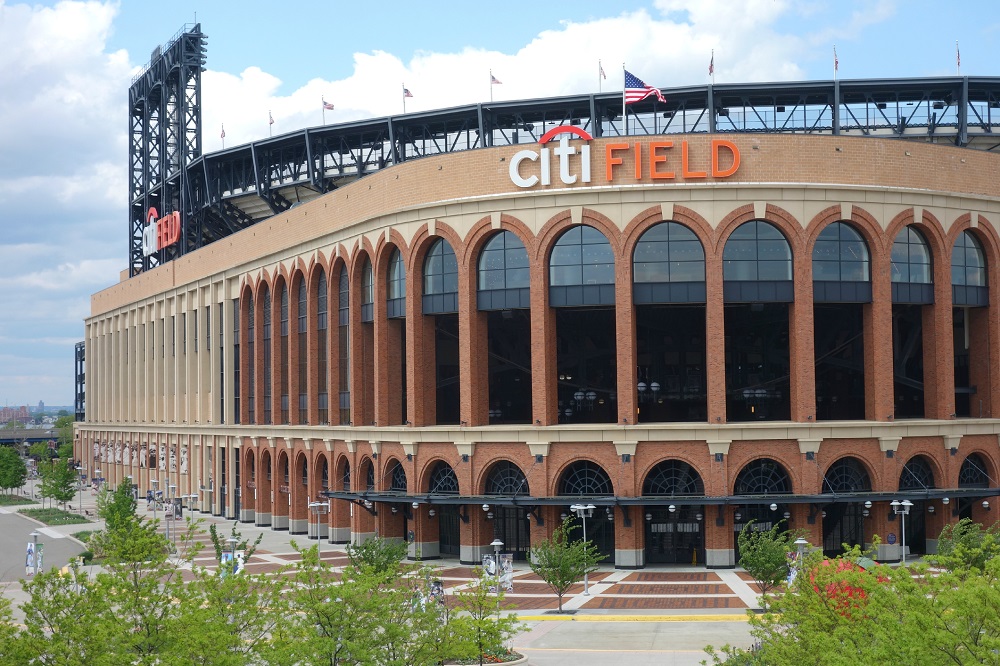 The New York Mets play baseball in Flushing Meadows in Queens, New York. The NY Mets official address of the venue is 41 Seaver Way, Queens, New York, in the United States. If you are looking for Citi Field Parking tips, you can visit that link.

When Did the Mets Home Run Apple Start?

Initially, Shea Stadium did not have the home run apple beyond the outfield walls but got that structure in 1980. The primary draw of the structure was that the apple rises after a Mets player hits a home run. In 2007, the Mets were thinking of retiring the Apple from their venue, but fans overwhelmingly voted to keep the structure.

Where is the Home Run Apple at Citi Field?

The old apple sits outside Citi Field while the new Apple sits beyond the center-field wall at Citi Field in the batter’s eye section. The apple is similar to the Marlins home run structure at LoanDepot Park and the Philadelphia Phillies giant liberty bell at Citizens Bank Park. Both Marlins Park and Citizens Bank Park have their structure go off when their home team hits a home run. All three groups are in the same National League East Division interestingly enough.

What is the Tradition of a Home Run in Citi Field?

The Citi Field Big Apple tradition, which began in Shea Stadium in 1980, became part of the design of Citi Field in 2009. After a Mets player hits a home run at the ballpark, the Apple rises up and down with flashing lights. The original apple, which was much smaller in size than the new apple, sits outside Citi Field as of 2020.

Who Hit the First Home Run at Citi Field

Interesting Facts about the Mets Apple

The Home Run Apple only raises up and down when a Mets player hits a home run, but there have been exceptions. One exception was when the New York Yankees in 1998 were the home team at Shea Stadium. The Yankees were playing a game at Shea Stadium due to a building code violation at the Old Yankee Stadium. During the MLB game, Darryl Strawberry, who was a former Mets player, hit a home run at Shea. In response to the home run, the apple rose halfway but made sure not to show the Mets logo out of the rivalry.

In 2015, catcher Travis d’Arnaud hit a home run that struct the Apple in the NLCS. After that game, the Mets put a giant bandage over the apple to reflect where the ball struct the apple. One interesting part of that home run was that the apple did not go up and down, so fans were chanting “we want apple” together.

Finally, the new home run apple is much larger than the previous structure. The previous structure was 9 feet tall while the new design is 18 feet tall. The old design use to sit inside Citi Field in the bullpen section in right field, but then moved to the outside of the venue in 2010.

Final Thoughts on the Mets Apple

The New York Mets resemble New York City and its history in many ways. Having the blue and orange Mets’ colors pays homage to the Brooklyn Dodgers and New York Giants teams of the past. The Jackie Robinson rotunda plays respect to Jackie Robinson along with echoing the old ballpark, Ebbets Field.

In addition to the team’s colors, Citi Field has numerous callouts to the city of New York. Numerous bridge motif’s throughout the ballpark represents the five boroughs and their connection via bridges. Finally, the Big Apple serves New York City as a whole and ties the Mets and city together as one team.

If you are looking for Citi Field Parking to catch a Mets game, you can visit that link! Also check out the guide to Citi Field Food as well when you get to the ballpark.