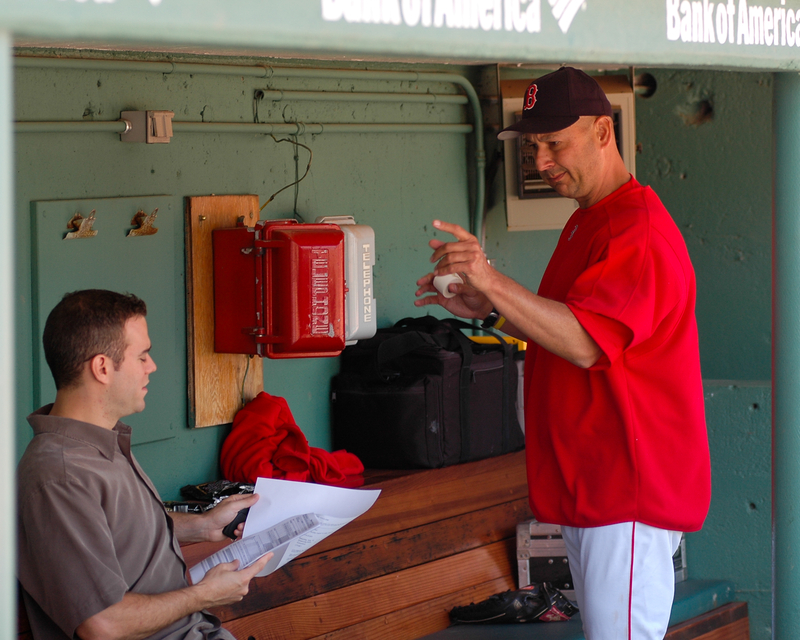 Baseball players and coaches tend to get the most credit for winning or losing. However, the team and coaches are built by the GM, which sometimes gets overlooked.  The GM (General Manager) works directly with the owner to spend their money in a way the owner would like. Here is the breakdown of what a GM does, the difference between them and a manager, and more.

What are the Responsibilities of a Baseball General Manager?

The responsibilities of a general manager in Major League Baseball (and Minor Leagues) oversees the coaching team and financial contracts. For example, the New York Yankees owner (Hal Steinbrenner) might give his GM (Brian Cashman) $200 million to spend each season. The idea behind the $200 million budget is to construct a team to win a World Series championship. The owner then steps away and lets the GM construct the team with that money.

A GM’s responsibilities include evaluating where the team is and consider buying or selling before or after the trade deadline. For example, a GM on the Detroit Tigers might have aging players with big contracts on a last place team. If the Tigers have no chance to make the playoffs, they might consider trading.

If the GM of the Tigers can trade away players, they can then construct their team for potential future success. For example, if you can trade away a player with a large contract to another team, you free up payroll to use and can obtain high-quality prospects that can help your team down the road. Typically you see teams use this tactic if they plan to be competitive in the future.

What are the Responsibilities of an Assistant General Manager?

An Assistant GM reports directly to the General Manager and assists in whatever they need. For example, a GM might have a position to fill in the offseason or during the season. If the GM sent MLB scouts out to watch a particular player, they might also have the assistant GM go there. The assistant GM can talk with scouts directly and report that information over to the GM.

How Much do Baseball General Managers Make?

Baseball teams don’t release the exact salary of GM’s and other front-office baseball operations salaries typically, but it’s safe to say GM’s are making upwards of $500k a year. For example, according to Celebrity Net Worth, Brian Cashman of the New York Yankees makes an estimated $3M a season. Typically speaking, GMs will make more than a manager on a baseball team.

Can You Fire a GM?

Like any position on a team, a player and or coach can get fired for many reasons. One high-profile GM firing took place with the New York Mets and their GM, Jared Porter. Jared Porter was fired from his position due to a sexual harassment investigation with a female reporter in 2016.

Outside of a firing via an investigation, GMs typically get fired due to their performance. Remember, a GM is using the owner’s money to construct a team to win. If the money does not bring a winning team, chances are the GM could be next to go. For example, Bobby Evans of the San Francisco Giants was fired in 2018 due to the losing performance of the team.

What is the Difference Between a Baseball Manager and a General Manager?

A baseball manager manages the day-to-day operations at a high level, while a general manager manages the organization’s goal. For example, Theo Epstein was the Boston Red Sox general manager from 2002 until 2011, and Terry Francona was the manager from 2004-2011. Theo helped bring in key free agent players starting in 2002 to construct a team that Terry Francona would eventually manage on a day today. The GM and manager duo helped with two World Series for the Boston Red Sox, ending an 86 year winless streak.

How Many General Managers are there in the MLB?

As of 2021, 28 teams have a general manager in their front office. The two teams that don’t have a general manager are the Los Angeles Dodgers and the Colorado Rockies. The Los Angeles Dodgers and Colorado Rockies don’t have a GM because they use a different operations model (Presidents of Baseball Operations) that they believe works for their organization.

What are the Presidents of Baseball Operations?

With the rise of advanced metrics to measure baseball players, GMs don’t always get the final say in making a move. With the influx of new data decision-making between internal divisions, teams are now expanding the role of POBO (Presidents of Baseball Operations) to make baseball decisions. Groups and organizations obsess over player’s development from anywhere in the world, so the role of a GM has to consider that as well.

Who Was the First Official MLB GM?

The first official GM in baseball history belongs to Billy Evans in 1927. Bill Evans was the GM of the Cleveland Indians baseball team.

Who was the First Female General Manager?

The first female General Manager in baseball is Kim Ng of the Miami Marlins in 2020. Before taking on the role as GM, Kim was an Assistant General Manager of the New York Yankees (1998-2001) and the Los Angeles Dodgers (2002 – 2011). Before that, Kim was an intern for the Chicago White Sox.

In summary, a General Manager in baseball helps facilitate an owner’s goal with their money. A GM works with scouts, coaches, the assistant GM, the data analytics team, and more to construct a winning team. While baseball continues evolving with baseball statistics, the role of a GM helps combine multiple facets to accomplish the goal of a team.

What is a Baseball Scout?

What Does a Double Switch Mean in Baseball?