I caught two games at the Tampa Bay Rays Stadium in 2019 against the Yankees. Many people online and offline told me that Tropicana Field is a dump, but I have a different perspective. You will find countless articles that ask what’s wrong with Tropicana field to start the conversation and be negative. It may feel like one of the oldest MLB stadiums in the game, but it’s been home to the Rays since 1998. If you’ve been on the fence on checking out this park, please continue reading below.

Today is May 14th, 2019, and it’s cold and rainy in Boston. The high is below 50 degrees, like all of April in the Boston area. When I got off my plane in Tampa, I could not believe how humid it was for April. Tropicana Field is a dome stadium with AC which makes watching baseball amazing. Having a domed stadium is critical because it keeps the playing area nice and cool while giving fans shade and protection from the sun. I walked about a mile from my hotel to the Trop and was starting to sweat just being outside in the sun, so indoor baseball is ideal. Plus, you will never have a rainout with the domed stadium, so there is no fear of traveling somewhere to have the game canceled.

If you were wondering why is Tropicana Field titled, you can check out that link.

The Rays are Exciting 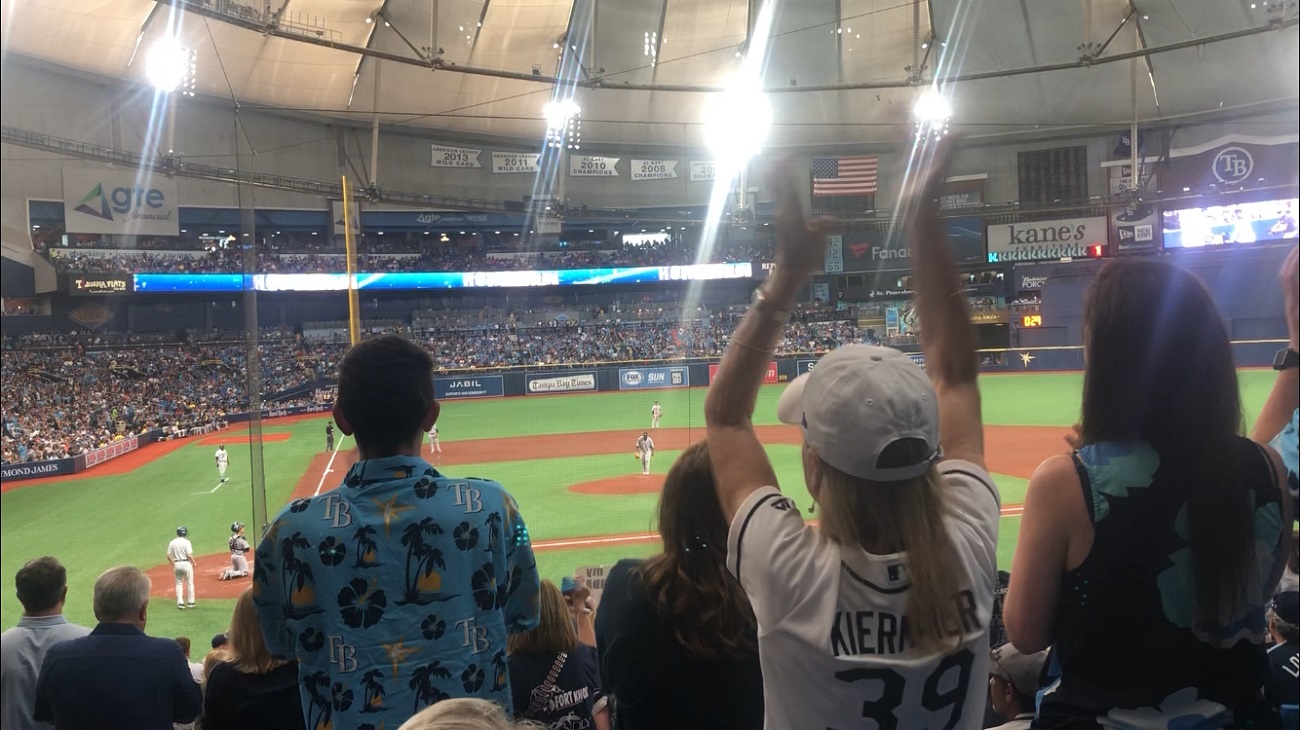 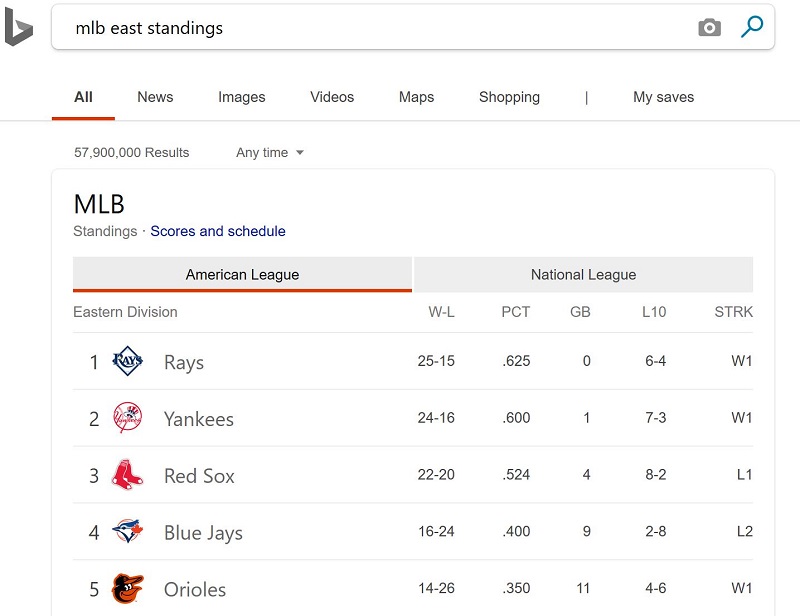 Did you know that the Rays are in first place in the American League East as of May 2019? If you are a Red Sox or Yankees fan, you do, but most people may not know this fact. The truth is that the Rays are young, exciting, and unconventional in their strategy. Baseball can be boring with teams striking out everywhere trying to hit home runs, but the Rays play small ball and are an exciting team to watch live. I did not know many of the players beforehand, but I quickly found out how talented Kevin Kiermaier and Austin Meadows are.

The Staff is Friendly

The staff at Tropicana Field were great. Want to watch the game for a bit as you walk around, no problem. You want the staff to take your photo during the game; you got it. Need help finding where to sit; they are there to assist. As the game went along, I was able to walk around the field level without much interference from the staff asking me for my ticket. I did try and get down to the 162 level, but the staff there did not allow me in, but she was charming and let me know the venue is for a private party only.

The Fans are Great

I love talking baseball to people at games. It’s great hearing the perspective of fans who support the Rays and those who root for the Yankees. All in all, I saw nothing but good vibes at the stadium with the fans. The game was also a sellout, so that made the experience great as well.

Plenty of Standing Room around the Park 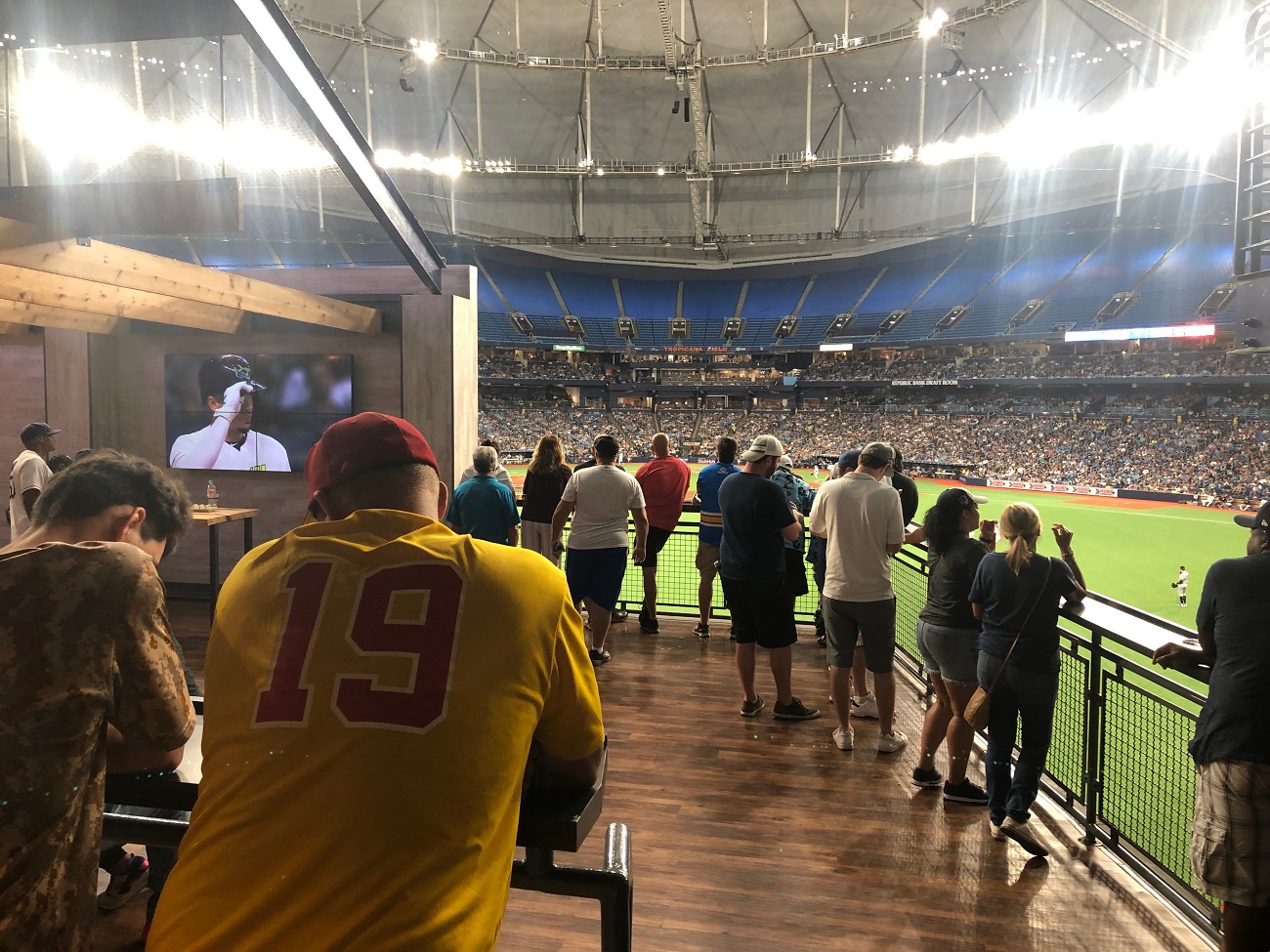 2019 was the first year that I took a game in at Tropicana Field. Talking with fans at the game, I learned that the stadium has gone through many improvements over the year. Some fan favorites include the center field standing room area, the outdoor section behind center field, and all the standing room sections around the park. I enjoy standing at times at baseball games, so Tropicana Field makes it easy to do this out in center field.

The Roof Colors are Beautiful 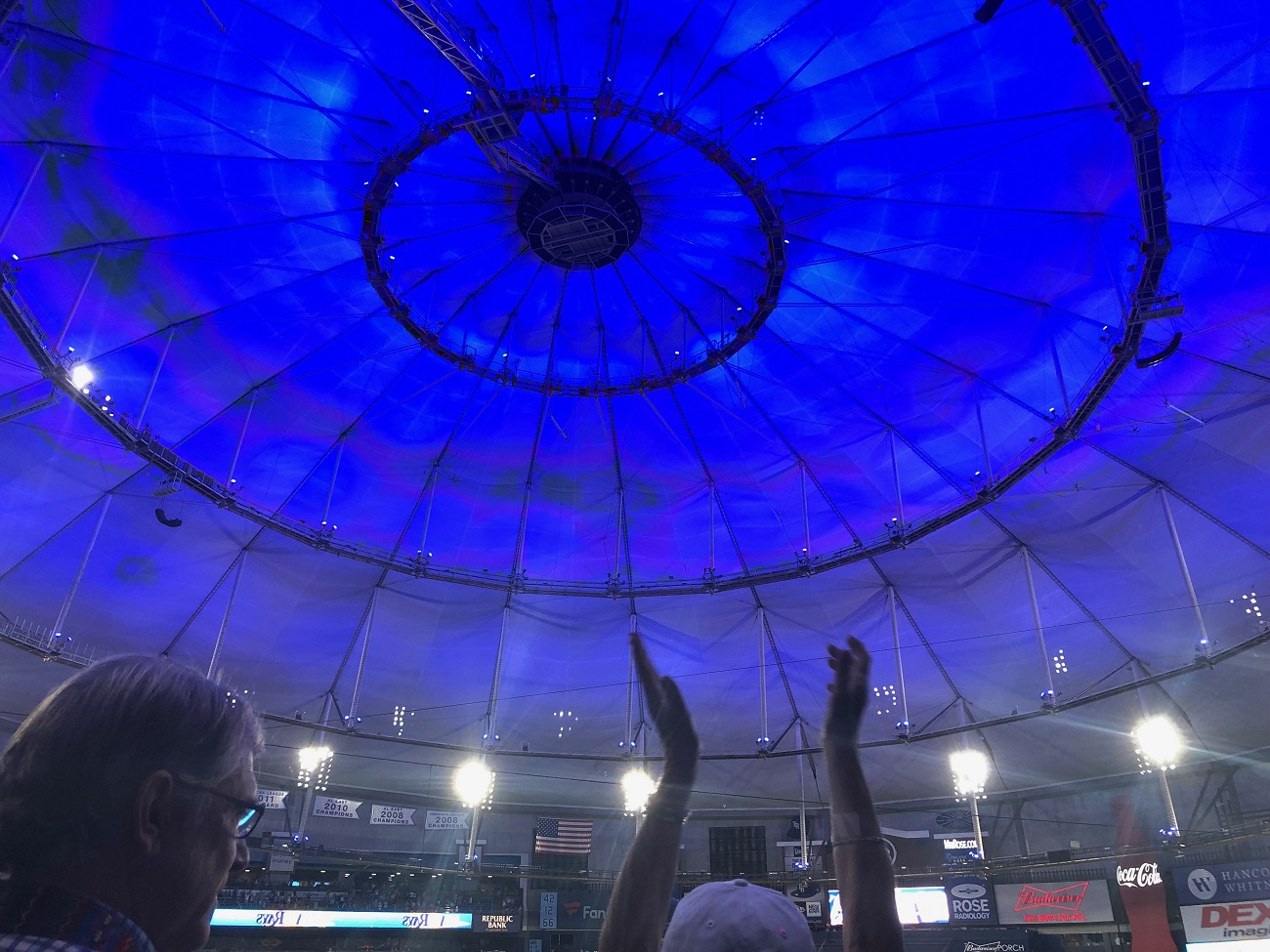 Nobody likes the ugly roof that hangs over the field, but the Rays did something special in 2019. During the national anthem, after a Rays home run, during the 7th inning stretch, and after a Rays win, you will see different roof colors. The roof changing colors adds a unique element to the Rays that is different from the other 29 parks in the game. When I was writing my Tropicana Field Review, I knew that the roof colors were going to be one of the highlights, and they are. It’s a cool feature that is unique so that fans will be impressed. 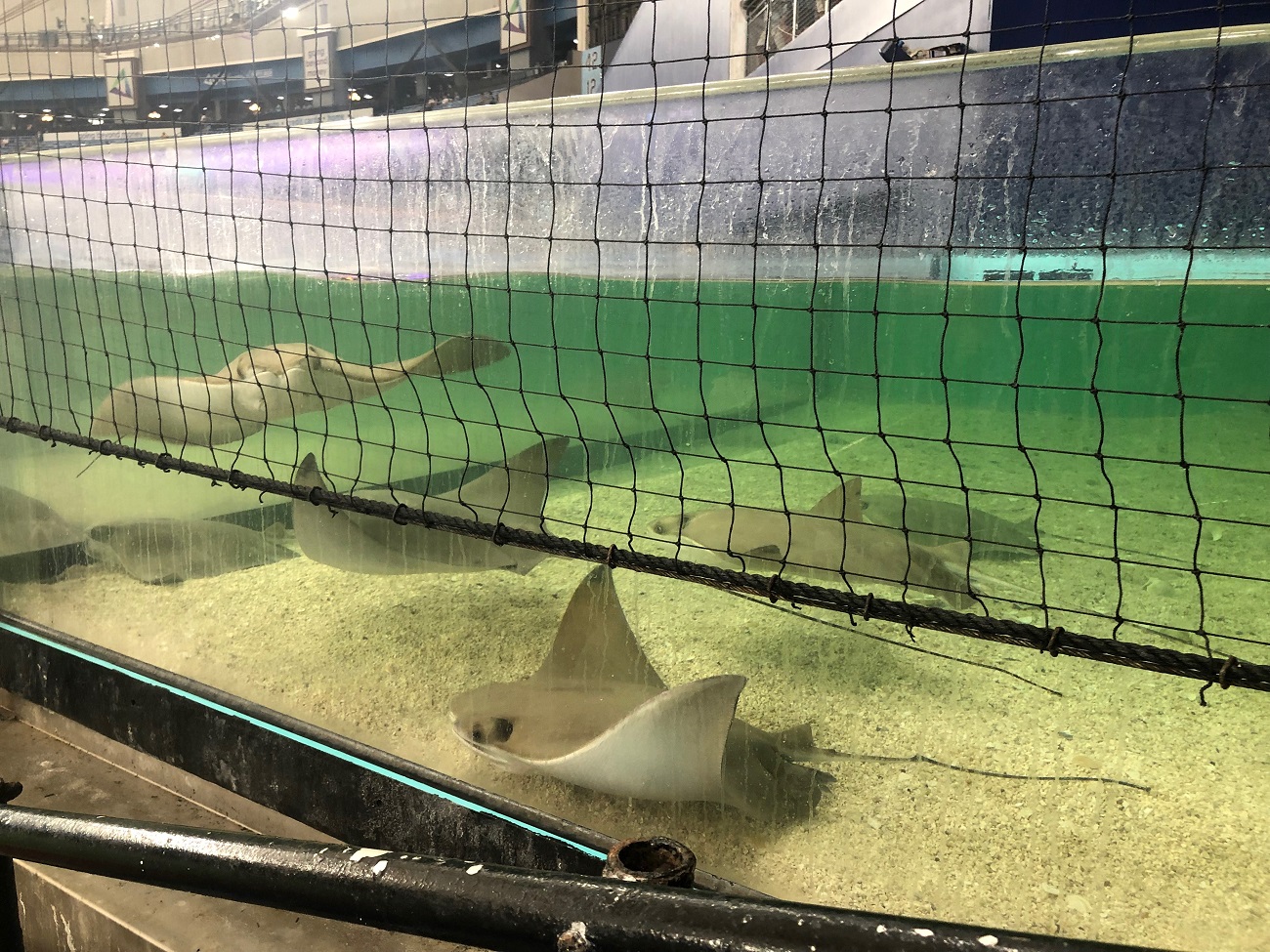 The Rays tank out in the right-center field is another unique section at the Trop. How cool is it to see live stingrays swimming around during a baseball game? Plus, you can even pet the fins on the rays as they go by, which is exciting. 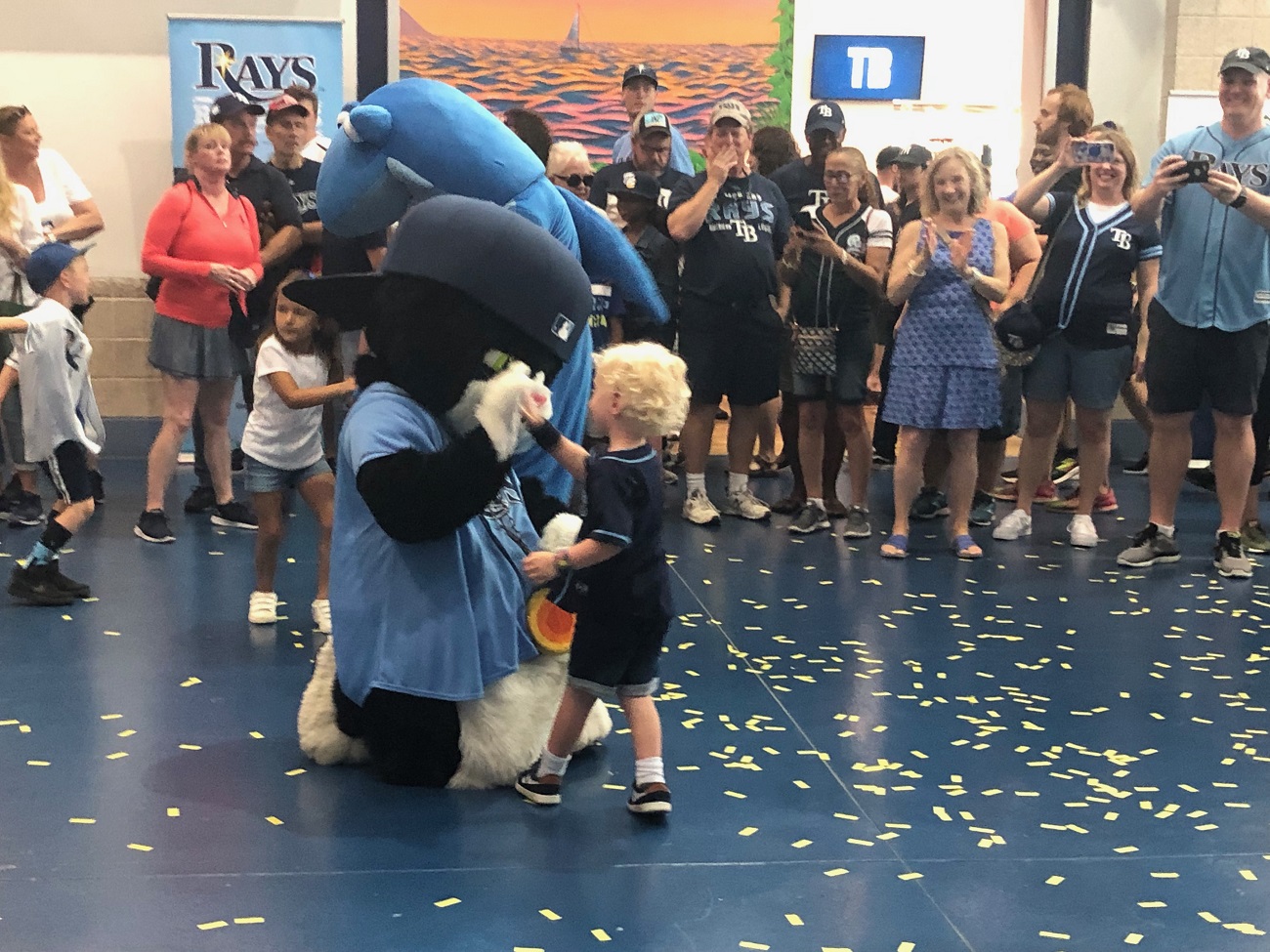 Walking into the stadium, I saw a few mascots jamming out to rap songs and dancing with little kids. A minor league feel was present for sure, but it was beautiful. Seeing moms and dads taking pictures of their kids jamming out with the mascots was fun. I don’t have any kids, but one day I hope to have some. Introducing my kids to baseball in a fun environment would be ideal unlike all the swearing that takes place at Yankee Stadium.

The Rays Future is Uncertain

Look, I’m not going to beat around the bush with this final thought. The Rays have been trying to find a new home for years. Whether it was to move to Ybor City, play some games in Montreal, or something else, The Rays keep looking. I think Tropicana Field was great for what it was in 2019, and I think fans should enjoy it while they can. The Rays are exciting, and the atmosphere at the venue can only be better when more fans show up to cheer.

Speaking with fans during the game, I heard that many feel the Rays may leave Florida in general. The market does not support their team; the Marlins proved that a new stadium does not bring in fans, and many more reasons after that. The current deal of Tropicana Field expires in 2027, and some fans feel the team may leave Florida. Perhaps the best situation since the Rays have problems getting people into their arena.

2027 is coming sooner than you might think. A lot can change, but the facility is most likely going nowhere. If you’ve heard that Tropicana Field is a dump, I encourage you to visit the stadium for yourself. I did in 2019 and had a great time. Sure, my rating of the park is low, but the main issues deal with the stadium being in St. Pete and not Tampa. Here is the guide to the Tampa Bay Rays Parking if you are going to drive to the game.