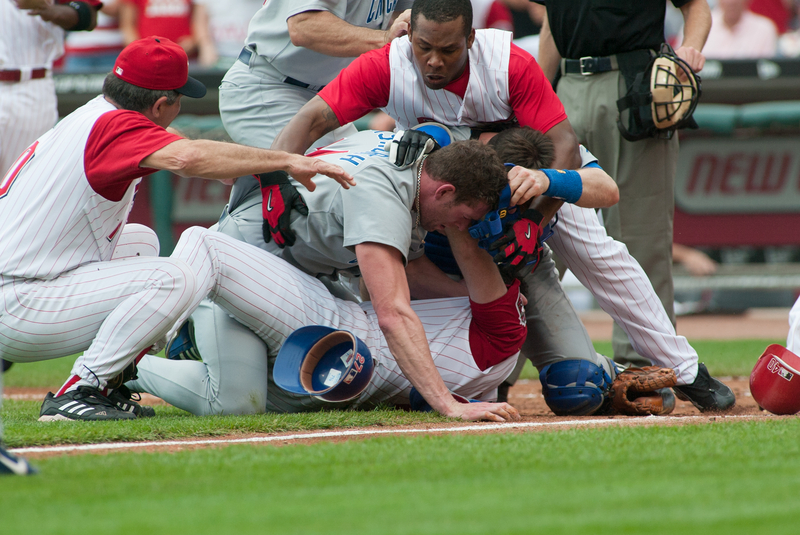 There have been plenty of memorable baseball fights between teams in MLB’s history. Some of the MLB fights happen when rivals meet on the diamond, while other conflicts come during the moment. Here are some of the best baseball fights in the history of Major League Baseball in chronological order from the most recent to oldest.

On April 12, 2018, the New York Yankees visited the Boston Red Sox at Fenway Park. The Red Sox pitcher, Joe Kelly, hit the Yankee’s Tyler Austin after Tyler spiked the Red Sox second baseman when sliding into second base earlier. Tyler Austin slammed his bat down and then charged the mound of Joe Kelly. The action of running towards the hill was a classic bench-clearing brawl between the two teams.

Bryce Harper (Nationals), was hitting against Hunter Strickland, which may seem like a regular plate appearance, but there was history between the two. Three years earlier, Bryce hit a home run in the 2014 MLB playoffs against Hunter, which was their first time meeting since then. The moment Hunter threw at Bryce Harper and hit him at Oracle Park, Bryce charged the mound, and the benches immediately cleared.

The drama between these two teams began in the 2015 ALDS when Jose Bautista hit a dramatic home run and threw his bat to show off. The next season, the Blue Jays visited the Rangers at Globe Life Park, when Jose Bautista got hit by the Texas Rangers. While on first base, Jose Bautista slid into second base and got into it with Rougned Odor. Rougned Odor then delivered a punch right to the face of Jose Bautista, and both benches came out into the field.

When the Pittsburgh Pirates were visiting the Cincinnati Reds at Great American Ball Park, there was s scuffle in the ninth inning. The Reds pitcher, Amir Garrett, charged the Pirates dugout, which began a massive baseball brawl. After the umpires were able to break up the fight, eight players ejected from the game.

When the St. Louis Cardinals were visiting the Reds on 8-10-2020, there was a massive fight at home plate. The Reds hitter, Brandon Phillips, got into a heated exchange with the Cardinals catcher, Yadier Molina. After a few short moments, you had both players in a massive brawl with tons of melee combat between the teams. After the umpires were able to get the situation under control, you had a handful of players suspended for their actions.

The Tampa Bay Rays visited the Boston Red Sox at Fenway Park in April, when things turned quickly to a brawl. Rays pitcher, James Shields, hit Coco Crisp with a pitch, so Coco charged the mound. In one of the most memorable moments, Coco Crisp dodged a punch from the pitcher and threw a punch back. Immediately you had both sides clear the benches to try and break up the fight on the pitcher’s mound.

The two teams from Chicago had a game at Guaranteed Rate Field, which many will remember for the fight that took place at home plate. As A.J. Pierzynski came home to score, he knocked the catcher (Michael Barret) over, blocking the path. The two players got tangled up for a bit, and then Michael Barret punched A.J. Pierzynski, which led to an all-out brawl.

During a summer game on July 24, 2004, at Fenway Park, the New York Yankees visited the Boston Red Sox. Alex Rodriguez was the hitter during the third inning, and he got hit by a breaking ball from Bronson Arroyo. As Alex Rodriguez was walking to first base, he began exchanging words with the Red Sox catcher, Jason Varitek. After a few moments, the two players began scuffle on the field, and the teams immediately went after each other on the field.

Things took an interesting turn during the Cubs vs. Reds game when Kyle Farnsworth of the Chicago Cubs almost hit Paul Wilson, who was attempting to bunt. The two players began exchanging words, which led to a fight between the two at home plate. Immediately, you had a benches-clearing brawl right at home plate.

On October 11, 2003, the New York Yankees were up against the Boston Red Sox in the 2003 ALCS. During the game, Red Sox Pitcher (Pedro Martinez) threw a fastball behind Yankees outfielder, Karim Garcia. Both teams began exchanging words immediately after that. Shortly after this moment, the Yankees pitcher (Roger Clemens) threw a fastball near Manny Ramirez, and the benches immediately erupted. During the baseball brawl, Don Zimmer charged Pedro Martinez, who threw him down to the field. There were no game suspensions that came from this fight, but later on, there was an incident in the bullpen at Fenway Park with the Yankee’s right fielder, Karim Garcia.

On May 5, 1998, the Baltimore Orioles visited the New York Yankees at the Old Yankee Stadium. The Orioles reliever, Armando Benitez, gave up a three-run home run to Bernie Williams in the eighth inning, which gave the Yankees the lead. Armando Benitez then took his frustration out on the next hitter, Tino Martinez, by drilling him in the back with a fastball via the next pitch, which broke an unwritten rule.

When the Seattle Mariners were visiting the Baltimore Orioles at Camden Yards on June 7, 1993, tempers flew. The tempers began when Seattle Mariners catcher, Bill Haselman, hit a home run against Mike Mussina, and then Mike Mussina hit him on his next at-bat. After getting hit by the pitch, Bill Haselman charged the mound at Mike Mussina, and the fight went on for twenty minutes. During the fight, you had Seattle’s Tino Martinez, Randy Johnson, Lou Piniella, and more were right in the middle of the brawl.

One of the most famous baseball brawls ever took place between the Chicago White Sox and Texas Rangers. After the hitter, Robin Ventura, got hit by Hall of Famer Nolan Ryan, Robin immediately charged the mound. Nolan Ryan immediately put him into a headlock, and the punches quickly came down between the teams. The White Sox third baseman tried his best to get out of the headlock but proved no match for the Hall of Famer, Nolan Ryan.

On the very first pitch of the game in the first inning, the Braves pitcher (Pascual Perez) hit the first hitter (Alan Wiggins) of the game. Words between the two teams immediately took place, and it would only get more ugly as the game went on. When the Braves pitcher (Pascual Perez) came up to bat, the Padres threw at the pitcher, and both dugouts came out to argue on the field. The umpires quickly warned both sides to knock it off, but tempers were beginning to mount. In the 8th inning, the Braves pitcher was hit, and both sides immediately went into an all-out brawl.

The two former New York teams had a match on August 22, 1965, at Candle Stick Park. Both sides fought for a close pennant race, so the tension for the game had amplification for being in the first place. After multiple pitches were thrown at both teams’ hitters, the benches cleared, and both sides got into one of the most intense fights on a baseball field. The starting pitchers for the game were Juan Marichal for the Giants and Sandy Koufax for the Dodgers.

Conclusion on the Best Baseball Brawls and Fights

Baseball history is rich with memorable moments like game-winning moments, but baseball brawls and players breaking unwritten rules are sometimes the most significant. From rival fights between teams to players getting into the heat of the moment, baseball fights are reasonably frequent. Fighting also helps unite groups with having each other’s back, which is similar to why there is fighting in the NHL.

How Many Stitches are on a Baseball

Why Des the MLB Use Wood Bats?

Baseball Cards Worth Anything?

Why is there Fighting in Hockey?

What Does Bush League Baseball Mean?