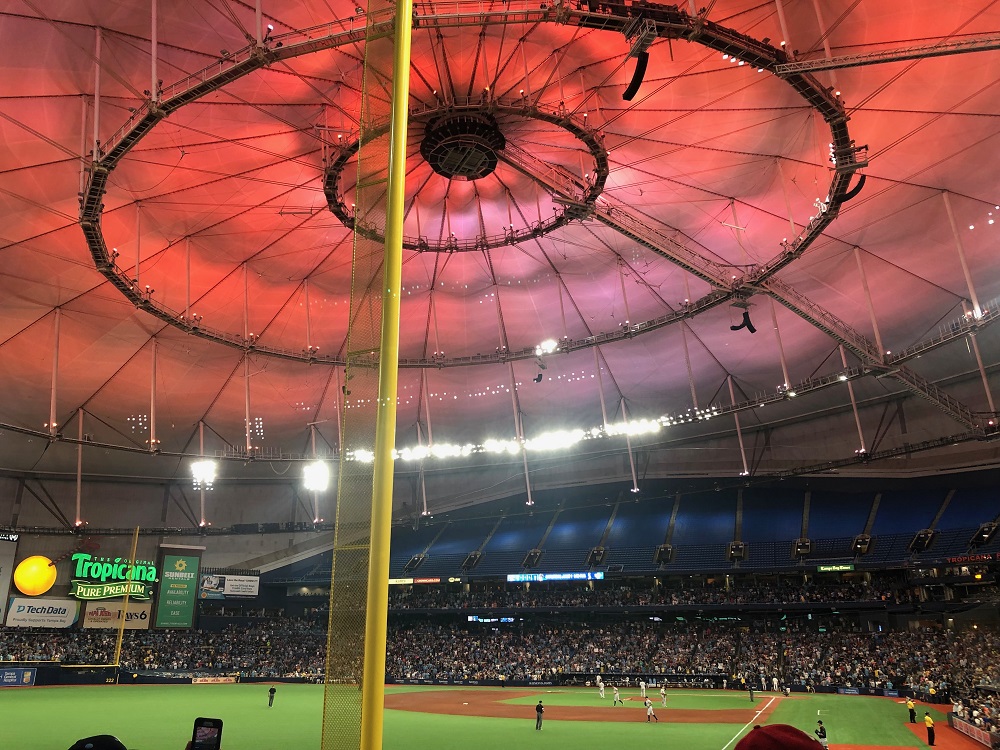 Are there any indoor MLB stadiums in the game as of 2020? The answer is quite a few, but most have retractable roofs. I went to the Tampa Bay Rays Stadium to watch the New York Yankees play against the Rays in a domed stadium. A domed baseball stadium would be a new experience for me, so there was a lot of excitement for my trip. People have negative thoughts about indoor baseball games and indoor ballparks, but this was my second time catching a match under a covered field. Here are my thoughts of indoor baseball, why I think covered baseball stadiums are a good idea, and more. 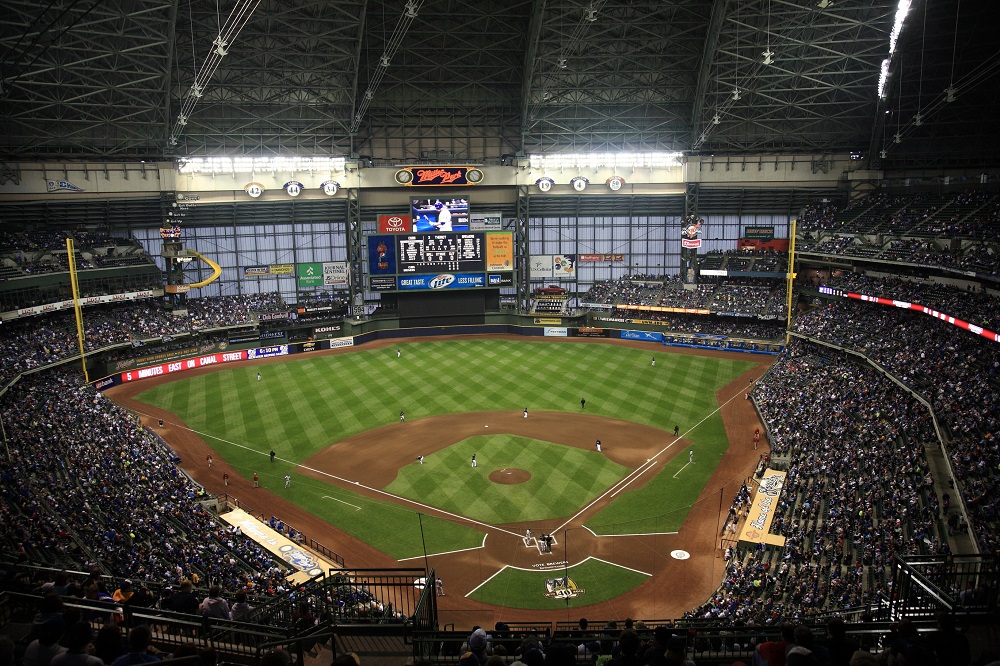 My first indoor baseball game was at American Family Field out in Milwaukee in 2012. The seats that my brother and I had were deep in left field and under the overhang. Miller Park is a retractable roof stadium, so games can happen under a dome or be open to the sky. Miller Park is one of my favorite Major League Baseball Stadiums in the game, so I have nothing but good vibes with an indoor or outdoor scene. 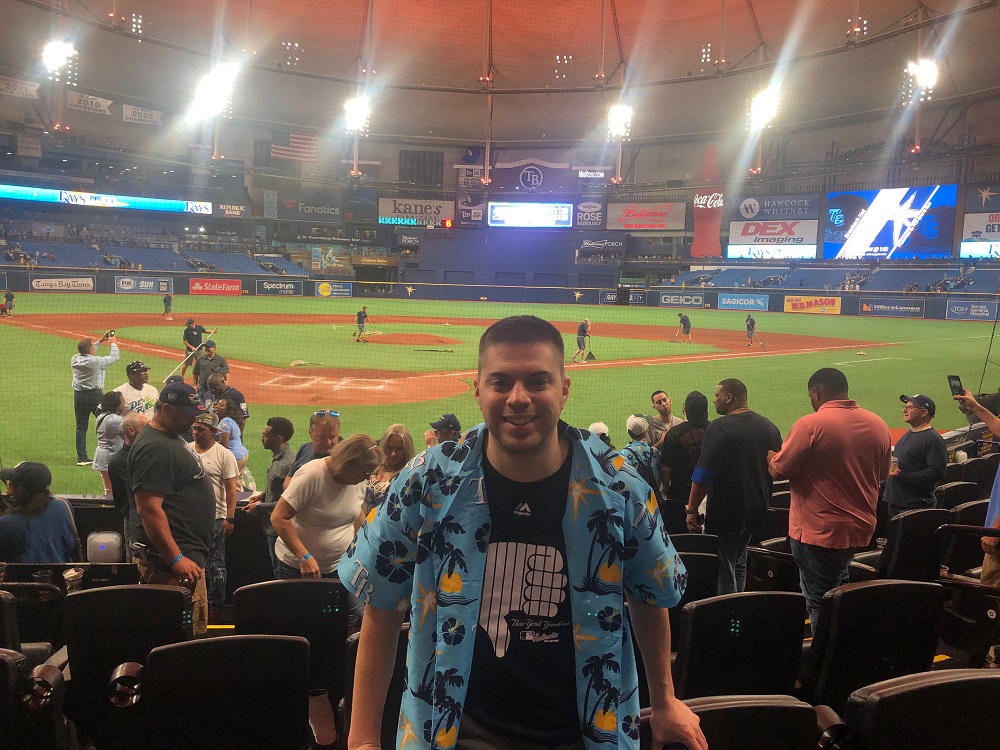 Tropicana Field was my first true domed indoor baseball field experience. I thought the venue would be weird with it being an indoor MLB stadium only, but it was okay. One element that stood out to me was how loud the stadium got when the Rays hit a home run. The crowd attendance was only 25k, so you can imagine if the stadium was around 40k or more of fans. 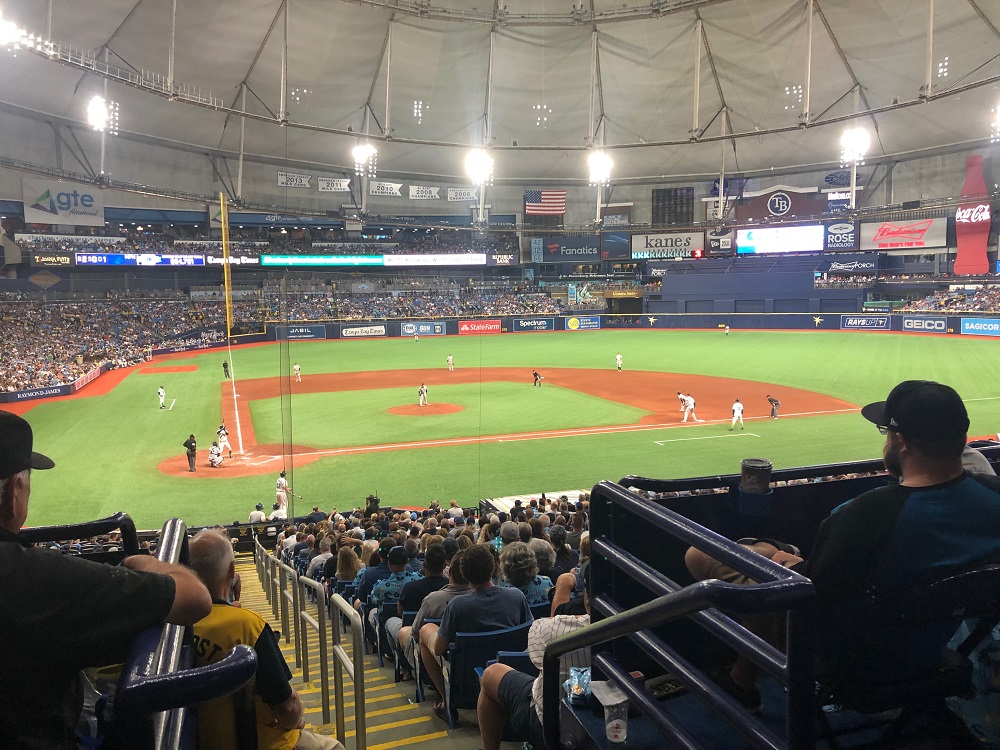 One criticism from fans is how quiet the indoor baseball field is when the Yankees or Red Sox are not visiting. The Rays fan said an eerie feeling is present when you are out in the center field and only see a handful of fans in their seats. You hear other fans conversations, the players conversions, and more as they echo around the dome. The game I went to was sold out, so I did not experience this, but I could see that this would be negative. Many people think that Tropicana Field is a dump, but I don’t think that is the case. Here are my thoughts on why the attendance is down at the ballpark.

Positives of a Roof: Don’t Worry about the Weather

I’m preparing to fly to Cleveland and Detroit for my annual baseball trip in 2019. My goal of visiting every park includes catching a game at Progressive Field and Comerica Park in 2019. The weather for the Indians game is questionable, so I’m nervous about the game getting canceled. I fear that the game will be called hours before the first pitch, so I run the risk of not even seeing the field. 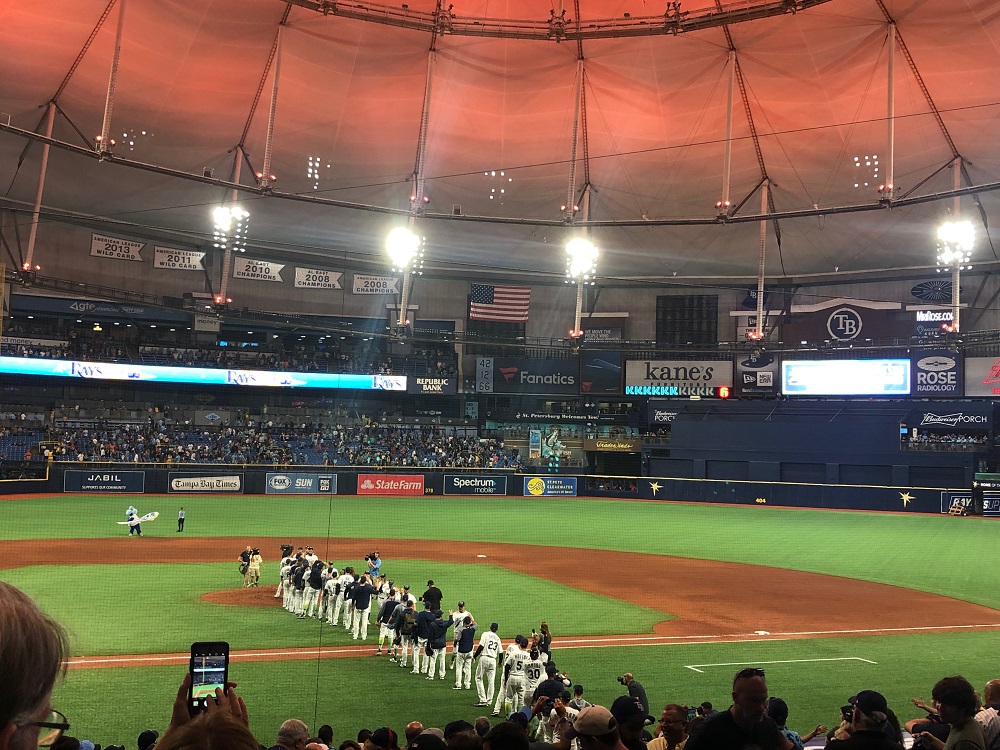 My game at Tropicana Field was in the middle of a lightning storm if you can believe it or not. I did not notice that there was a storm outside until I went to the outdoor patio in center field. The weather became windy, lightning was off in the distance, and the chance of rain showers was around the corner. Good thing I was indoors because it rained for the rest of the night, but the game continued.

Rogers Centre has a retractable roof, and I was fortunate enough to catch a game with the roof opened and closed. With the roof open during the game, I saw the CN Tower along with the buildings in Toronto which was awesome. The crowd attendance was pretty small, which made the indoor baseball field experience very quiet. 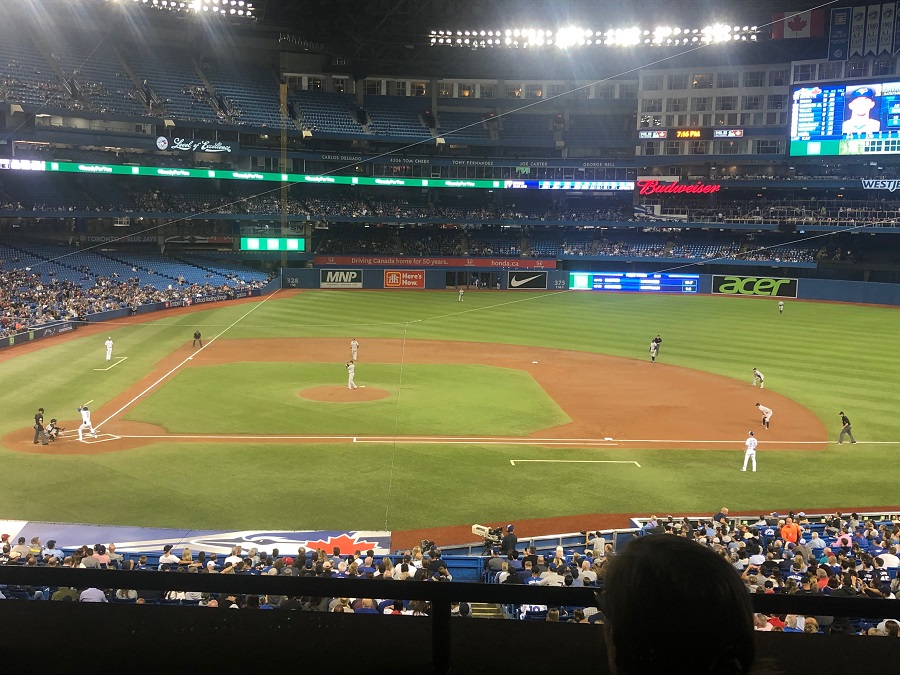 The next game had miserable weather with lots of rain and wind, so the roof was closed. It’s such a nice relief to walk into a baseball stadium and not worry about the weather elements. Sure, I like baseball games outside, but the indoors experience was fine at Rogers Centre.

What MLB Teams Have Indoor Stadiums

Parks That Almost got a Roof

Should All Baseball Park’s Have a Retractable Roof?

I remember thinking why did the Yankees even get a new park? Economics was the reason of course, but the retractable roof would be impressive and a great addition to the history of teh the team. I can’t help but think of my own experience when I got to Yankee Stadium to ultimately have the game rained out. I went to Yankee Stadium last year with rain throughout the game too. The experience of sitting out in the rain for hours is miserable when you are watching baseball to say the least.

Reasons for a Roof 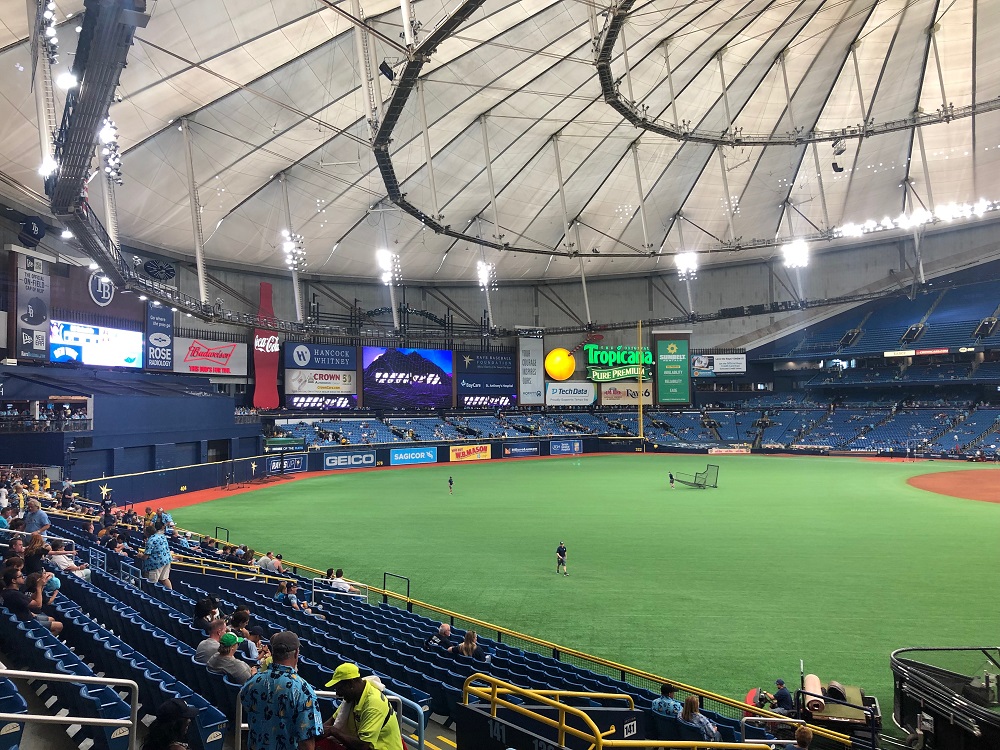 It was over 90 degrees in Florida when I went to the Trop in 2019. It was only May, so I can’t imagine how bad it must feel in July and August. Giving fans a roof during the dog days of summer would make the experience more comfortable. Instead of sweating all day out in the sun, you can stay nice and comfortable indoors.

The second reason for a roof is with rain delays and cancellations. I’m biased, but having one bad experience with a rainout is something you will always remember. As I plan my baseball trips in 2019, I have to wait and watch the weather before I book my tickets. For the Rays, I bought my tickets without much though. For my trip to Ohio and Michigan, I have to make last minute decisions based on what the weather may look like which is annoying.

Finally, I think having a retractable roof adds another element to the game. It got deafening loud at Tropicana Field after a home run, so I can imagine what it would sound like during a World Series game or something else. I’m not saying that a domed baseball stadium is necessary for a place to be loud, but some parks like Kansas City, San Diego, or Los Angeles Angels would be so much louder if they had a roof to bounce the noise back on the field.

All in all, I prefer baseball to be outside, but having a retractable roof would be a bonus. I love seeing the backdrop of being in a different park, so an open-air concept is my preference. However, I believe that a roof should be a requirement for all new stadiums, so fans don’t have to worry about the elements and stay comfortable if the roof is needed.

In 2020, I’ll be visiting Safeco Field out in Settle, Washington for a baseball game. That ballpark has the ability to have a roof, or have the baseball games open to the weather condidions.