History of the New Yankee Stadium

The New Yankee Stadium opened in 2009 on April 2nd against the Cleveland Indians. The venue, in the Bronx New York, was built directly across from the old Yankee Stadium, so they share the same address at East 161st Street Yankee Stadium. People refer to this building as the house that Derek Jeter built as the original  venue was known as the House that Ruth built.

Here is my review of Yankee Stadium along with a video vlog of a game in 2019.

What Team Plays at Yankee Stadium? 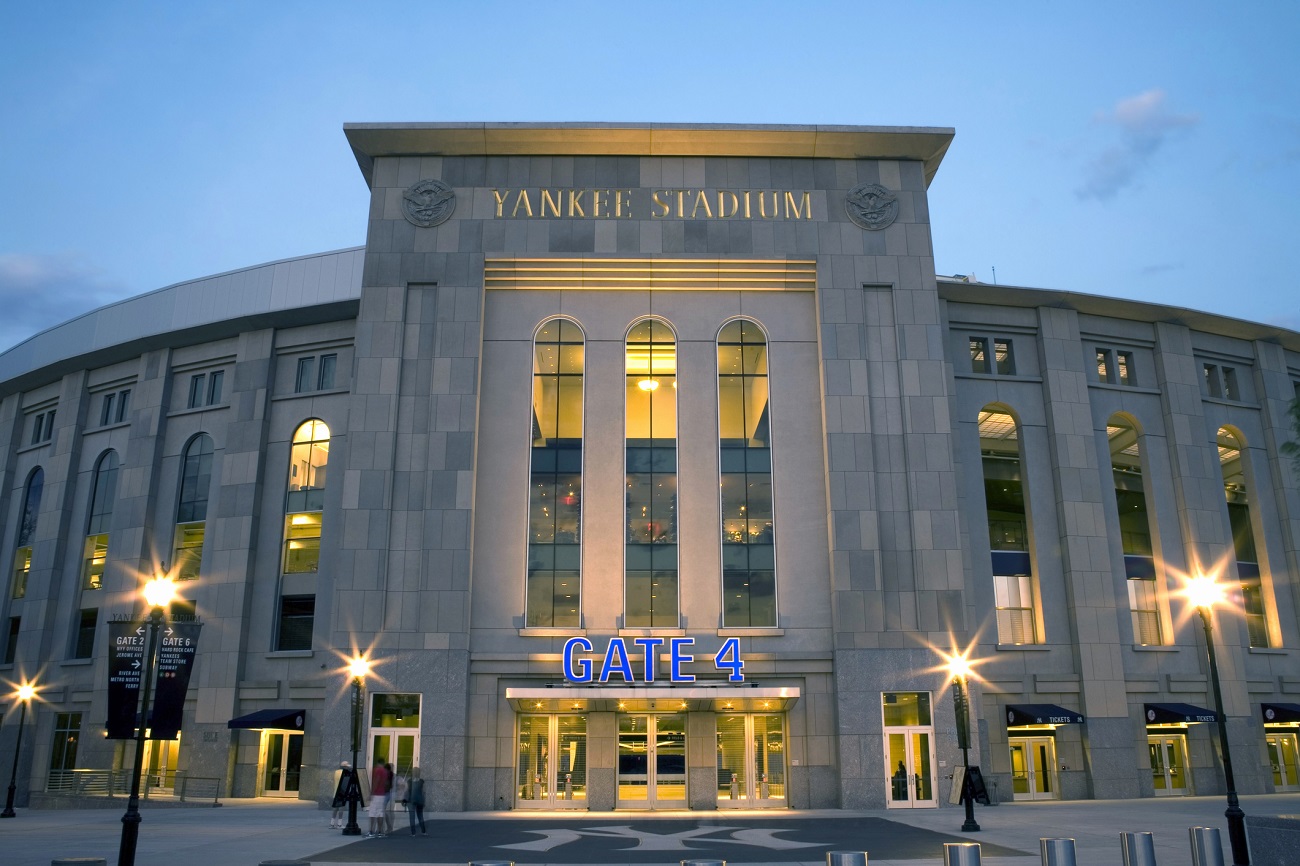 What Times Do the Gates Open at Yankee Stadium?

No matter what time the game is, Yankee Stadium opens 2 hours before the first pitch. The one game in the season where the gates open even sooner is Old Timers Day. One neat addition to Old Timers Day is to hear Bob Sheppard‘s voice welcome fans to the ballpark.

Where is Yankee Stadium Located? 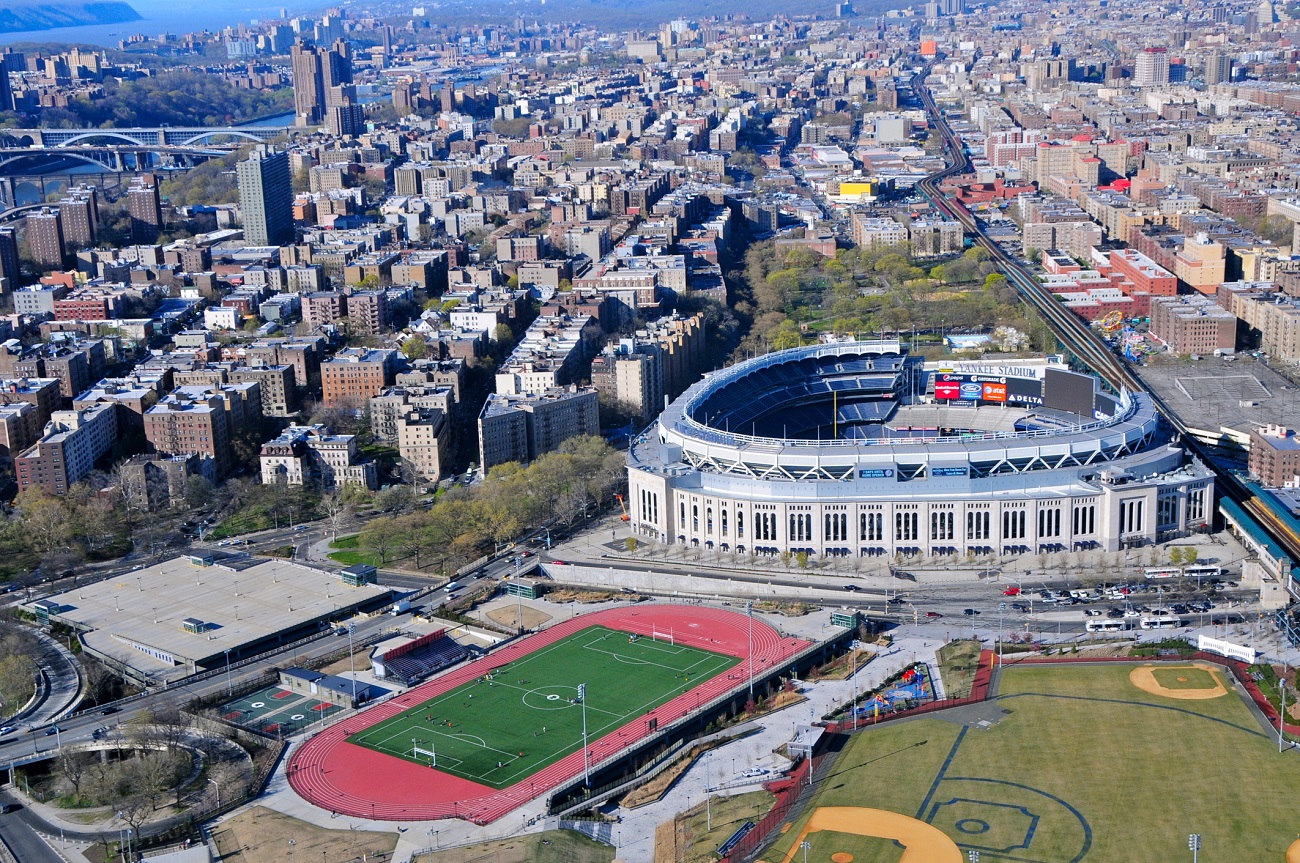 There are multiple boroughs that make up NYC which may surprise travelers who are not familiar with the area. The New Yankee Stadium’s location is in the Bronx, NY in the United States. If you are looking for Yankee Stadium Parking, you can check out that link.

In addition to baseball, NYC and New Jersey have plenty of teams near Yankee Stadium. The New York Knicks basketball team plays in Manhattan, Nets play in Brooklyn, Mets play in Queens, and the football teams play out in New Jersey. If you are looking for Madison Square Garden Parking, Barclays Center Parking, Citi Field Parking, or MetLife Stadium Parking tips, you can visit those links.

You will notice that the Yankees kept their name on the stadium which is a rarity in sports today. The owners of the team continue to be the Steinbrenner family and firmly want to keep the name away from corporate sponsors.

What are the New Yankee Stadium Dimensions? 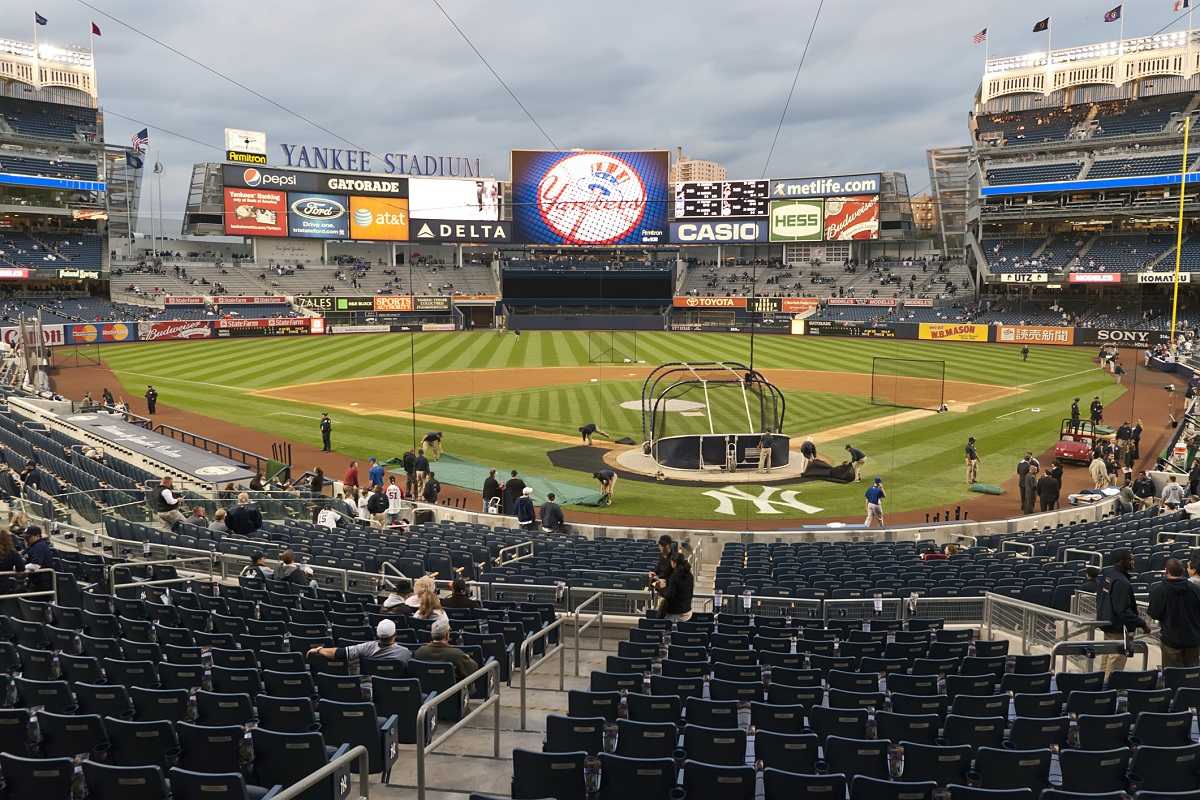 Yankee Stadium technically carries the same dimensions over from their old ballpark, but the wall height is about two feet shorter. In right field, you will see a listing for 314 feet which is marked as the “short porch in right” by many analysts. In right-center, you will see a marking of 385 feet, center field is 408, left center is 399, and left field is 318. The dimensions are same as the old Yankee Stadium dimensions, but the fence at the new place is two feet shorter and right field does not have a gradual curve to center.

What is the New Yankee Stadium Seating Capacity? 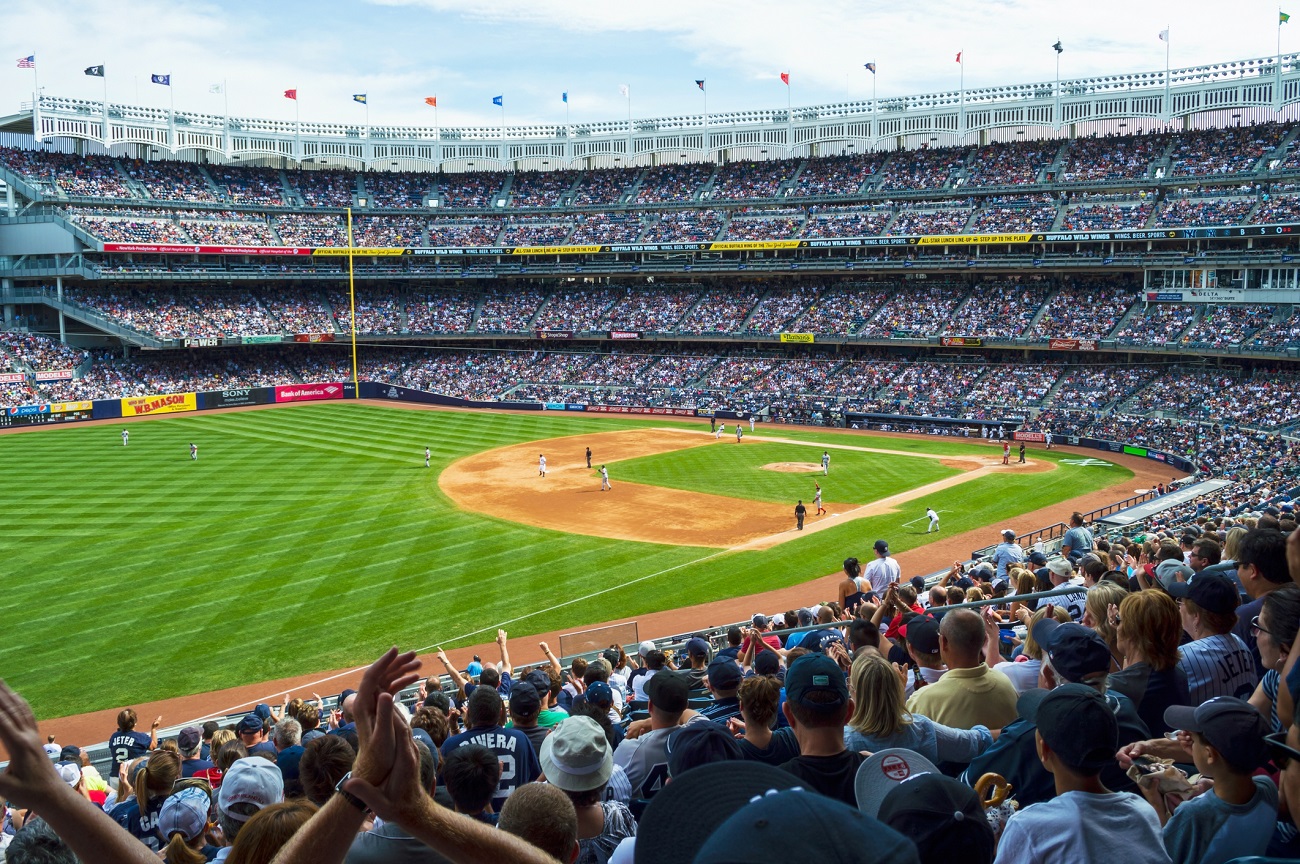 The official capacity at the new Yankee Stadium is 50,291. When you compare it to the old stadium, you lose around seven thousand seats. One main differences of the new and old stadium is the new stadium has extra legroom ranging between 33 and 39 inches compared to 29.5 inches at the old stadium.

Amenities at the Ballpark

The concourse average width is 32 feet and almost the entire stadium has an open view to the stadium. The great hall has an open view of the Bronx, NY with pictures of past Yankee players. Some of the players include Babe Ruth, Joe DiMaggio, Mickey Mantle, Roger Maris, Yogi Berra, and more. The new Yankee Stadium museum is free to check out for fans too. One of the best aspects of the museum his seeing Thurmon Munson’s locker.

The New York Yankees had an average of 42,998 fans per game in 2018. To help catch a game, fans should look for tickets against the Tampa Bay Rays, Detroit Tigers, Toronto Blue Jays, Chicago White Sox, Kansas City Royals, and the Oakland Athletics since they have less interest. Big matchups against the Boston Red Sox, New York Mets, Houston Astros, and Los Angeles Dodgers will require fans to depend on StubHub, TicketMaster, SeatGeek, and more to find seats.

The standing room only sections are on the lower parts of the stadium under the concourse. The downside of these seats is that you won’t be able to see the ball up in the air when their is a pop up, but the value is cheap. 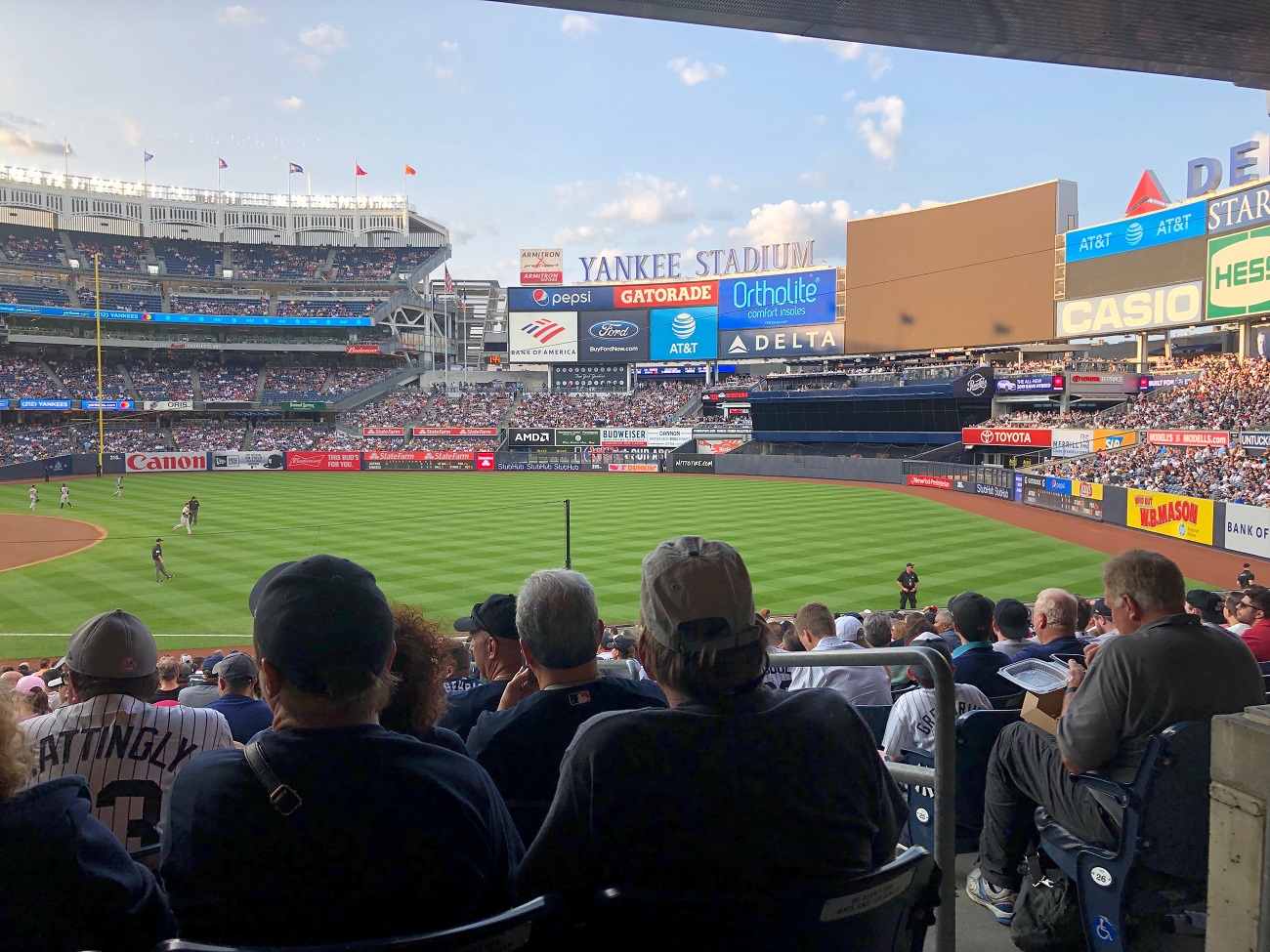 The best seats at Yankee Stadium are the ones behind home plate, but most casual fans can’t afford those prices. There are no obstructed views at the arena, so technically there is not a bad seat in the house. The best seats with great views and a reasonable prices include field level seats. The seats in section 203 out in the bleachers might be the most fun being the bleacher creatures.

With Yankee Stadium in NYC, you have a few options to the north and south of your location. The closest ballpark next to the Bronx is Citi Field in Queens NY. Citi Field is where the New York Mets play, so try and visit both places.

If you go northeast, Fenway Park is about 3.5 hours away by bus, car, and train. The Red Sox and Yankees play against each other often but expect tickets to be more expensive. If you go north from Yankee Stadium, can get to Rogers Centre which is about ten hours away.

To the south, you can find Citizens Bank Park which is out in Philly. That is the home of the Philadelphia Phillies. Not too far from that, you can catch a game at Camden Yards which is home to the Baltimore Orioles.

There are many great features for fans to take in when visiting Yankee Stadium. Yankee Stadium tours are available all year around too. Check out Monument Park, the Hall of Fame, and the Great Hall if possible.