When did the Trop Open?

Tropicana Field (also known as the Trop, Tropicana stadium, Tropicana Dome, or Tampa Bay Rays Stadium) opened in 1998 to the Tampa Bay Devil Rays. This facility initially opened up in 1990 and was known as the Florida Suncoast Dome. The Tampa Bay Lightning hockey team played at the Trop for a bit until the Devil Rays began playing there in 1998 for baseball. The owner, Stuart Sternberg, has been trying to move the Rays out of St. Pete for awhile, but the Rays will continue to play at the facility till the end of 2027.

Check out Why is Tropicana Field Roof’s Tilted for some interesting facts! Also visit the resource about the Tampa Bay Rays mascots.

The location of Tropicana Field out on One Tropicana Drive is in the city of St. Petersburg Florida in the United States. The venue is in St. Pete in the Hillsborough County and Pinellas County region. Many people assume that the baseball team is in downtown Tampa, but it’s about a 20-30 minute drive to downtown.

There have been many complaints from fans on how it’s difficult to get to the ballpark from Tampa. Unlike where the Tampa Bay Lightning hockey team or Tampa Bay Buccaneers football team play, the Rays sit across the bay. Fans outside of St. Pete looking for Tropicana Field Parking can visit that link to learn where to park. For fans out in St Pete interested in hockey or football, you can check out Amalie Arena Parking and Raymond James Stadium Parking respectively.

How Far is Tropicana Field from the Tampa Airport?

It’s about a thirty minute drive from the airport to the home game venue. The distance is about 22 miles between the two locations, so your best bet is to Uber or Lyft to the venue if you are visiting. If you are able to stay in St. Pete, you can significantly cut down on travel time since you don’t have to travel across the bay.

When Does Tropicana Field Gates Open for Fans?

Rays Stadium open 90 minutes early from Sunday through Thursday. Games on Friday and Saturday open two hours before the first pitch. Fans should consider getting to the park early when a giveaway is taking place. When the Yankees or Red Sox come to town, you can expect longer lines, so plan accordingly.

Check out the Tropicana Field Food guide before entering the stadium!

What Team Plays at the Tampa Rays Stadium?

Rays Field is home to the Tampa Bay Rays baseball team. The Rays (formerly the Devil Rays) are an American League East team in major league baseball in the AL East. In the American League East, you have the Boston Red Sox, New York Yankees, Toronto Blue Jays, and Baltimore Orioles. Since 1998, the Rays have not won a World Series, but they did make it to the World Series in 2008.

What are the Dimensions at Tropicana Field?

The dimensions favor hitters by being a bit smaller than other venues. From left field to right field, the aspects run as followed. Left field is 315 feet, left center 370, center field is 404, Right center is 370, and right field is 322.

What is the Capacity at Tropicana Field?

The park can hold 45,000 fans, but fan support is a major issue with the Rays. When the Boston Red Sox or the New York Yankees come and visit, you can expect more of the opposing fans at the game. The current capacity at the field for 2019 is 25,000 which is the smallest in the game. With the lack of fan support, the Rays closed off the upper deck in 2019 to save money on staff and improve margins. 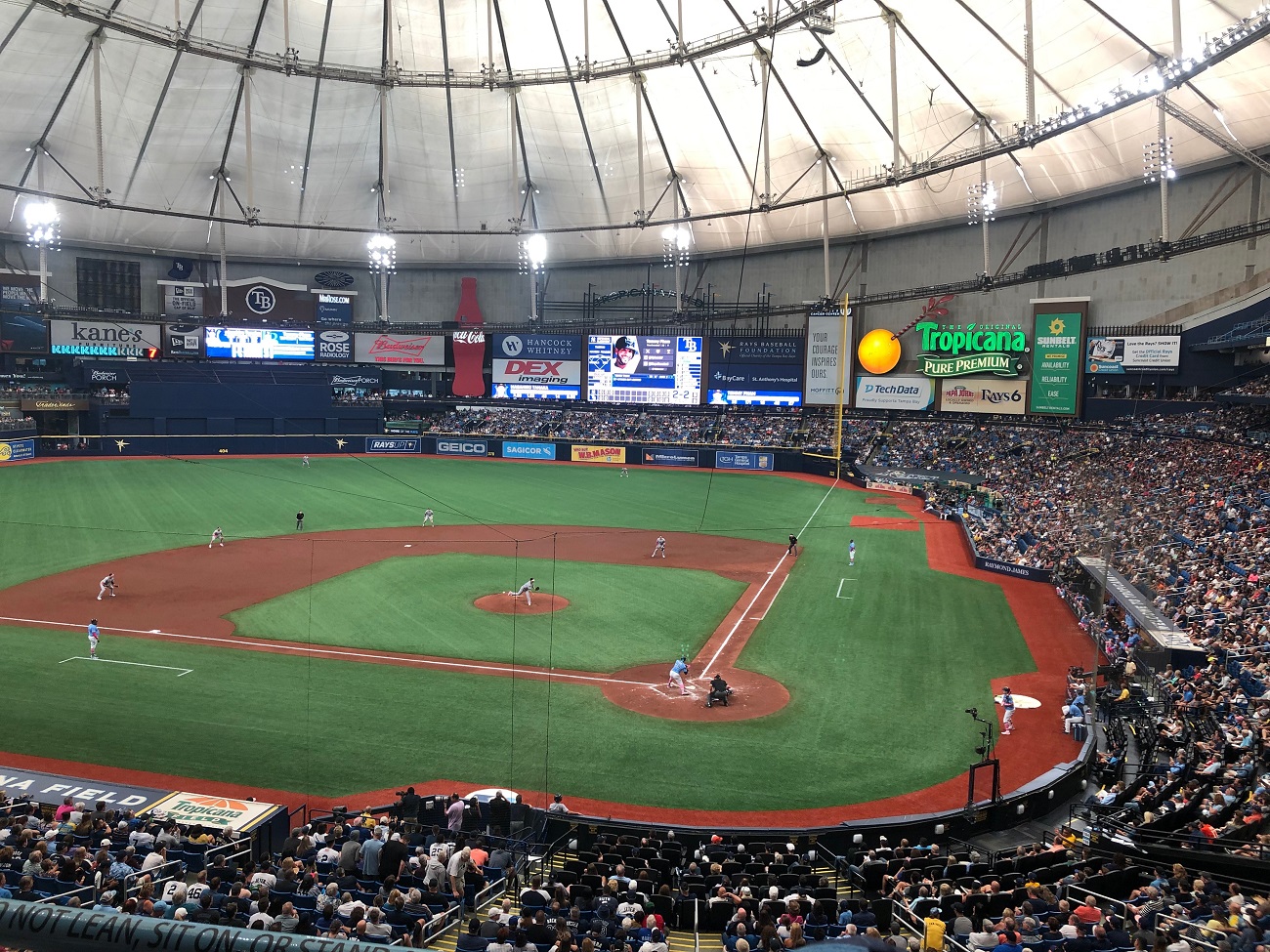 Rays games have small crowd attendances, so it will be easy to get tickets for regular season games. When the New York Yankees, Boston Red Sox, Los Angeles Dodgers, San Francisco Giants, Toronto Blue Jays visit, you can expect more opposing games at the venue,. For bigger matchups to those teams I’ve mentioned, Rays fans should use Stubhub, TicketMaster, or SeatGeek to get tickets.

Who is the Owner of the Team?

Rays owner Stu Sternberg has owned the team since 2004. Rays fans generally have mixed reviews of their owner calling him cheap and not interacting with the community like other owners.

Tampa Bay Rays Stadium is a dome ballpark, but the design is not ideal for baseball. One major issue is he roof is white, so balls become lost on pop-ups. In addition to the roof, you have multiple catwalks that lay overhead the field that occasionally are hit during the game. Depending on what catwalk the ball hits can determine where you end up on the diamond,

One truly unique aspect of the venue is the Rays tank out in right-center. The Rays tank is open to all fans to come by and pet the sting rays swimming by. It’s truly one of a kind and is the only park in baseball to have something like this.

If you are looking for Rays Stadium food vendors, my suggestion is to head to center field. The center field area has great food options outside of hot dogs and cheeseburgers. There are plenty of standing room sections for you to eat and watch the game from center field, so check it out!

The answer to that question is yes! One of the best parts of catching a game in St. Pete is being nice and cool during the game. It gets extremely hot in Florida, so the facility has air conditioned to keep fans cool for the regular season. You will be very comfortable in shorts and t-shirt without sweating.

There are designated smoking sections at the Tampa Bay Rays Stadium. Fans can head over to left field and smoke outside in the circular ramps. Here you will find places to smoke along with being in the shade.

Can you bring in Bags into the Stadium?

In 2019, fans are unable to bring a backpack into the game. Fans trying to bring a backpack will be subjected to a screening, but most of the time will not be allowed to bring in their bag. Purses and baby bags can be brought into the venue as the security team will check what’s in the bag.

It’s no secret that the MLB and the Rays want a new stadium. The team needs it desperately as the location is not ideal. A dome stadium (unlike Marlins Park) is not suitable in Florida. Fans are unable to enjoy the beautiful views of Florida, nor appreciate the sun.

The Tampa Bay Rays have talked about moving to a smaller size ballpark in Ybor City for a cost of 900 million dollars, but the plans have fallen apart. The Rays owner, Stuart Sternberg, keeps trying to find a new location for the Rays, but can’t secure financing. Stuart and the Tampa mayor continue to try and find the next location for the Rays so they can stay in Florida and build a new stadium., but time is running out. The current lease of Tropicana Field expires at the end of 2027.

A common thought people have is that Tropicana Field is a dump. My post tells a different story. See what I have to say!