Getting to a game at Tropicana Field is tough when you drive. My hotel was only a mile away from the stadium, so I walked to the game. However, my Uber driver,who drove me from the airport, told me many fans choose not to drive to the games because of the distance. Many people live out in Tampa and the surrounding parts of St. Petersburg, so getting to and out of the game is challenging. Without a robust public transportation option to get people from Orlando and Tampa to the Trop, I have to say this is the most difficult stadium to get to.

Here is the guide to Tampa Bay Rays Parking if you drive. Below is a video illustrating my time at the Rays game.

Tropicana Field is similar to American Family Field where the venue is in a large parking lot. Fans were playing playing catch in the parking lot, people were grilling and playing drinking games, and more. My low overall score deals with the lack of Rays promotions around the venue. After the game, I walked around to the bars around the stadium, and you would never know a baseball team was just around the corner. It did not have a baseball or sports feel around it, so it was disappointing.

Tropicana Field (in my opinion) gets a bad review from most fans. I’ll start with my pros and in the next paragraph end with my cons. All in all, I think the Rays have done a lot to improve the venue in 2019.

First, having the game at 72 degrees was perfect. It was 90 degrees outside as I got into the game, so the venue was nice and cool. Second, I dug the center field area, the Rays tank, and all the open standing room sections around the site. I’m a fan of being able to catch the game from different angles, so the Rays did an excellent job here. Third, I love how the Rays are playing with the roof lights in 2019. During the national anthem, the roof was changing colors during the song, and when the Rays beat the Yankees, the roof went red. Finally, I liked the way that the Rays played up game 162 in 2011 out in left field. 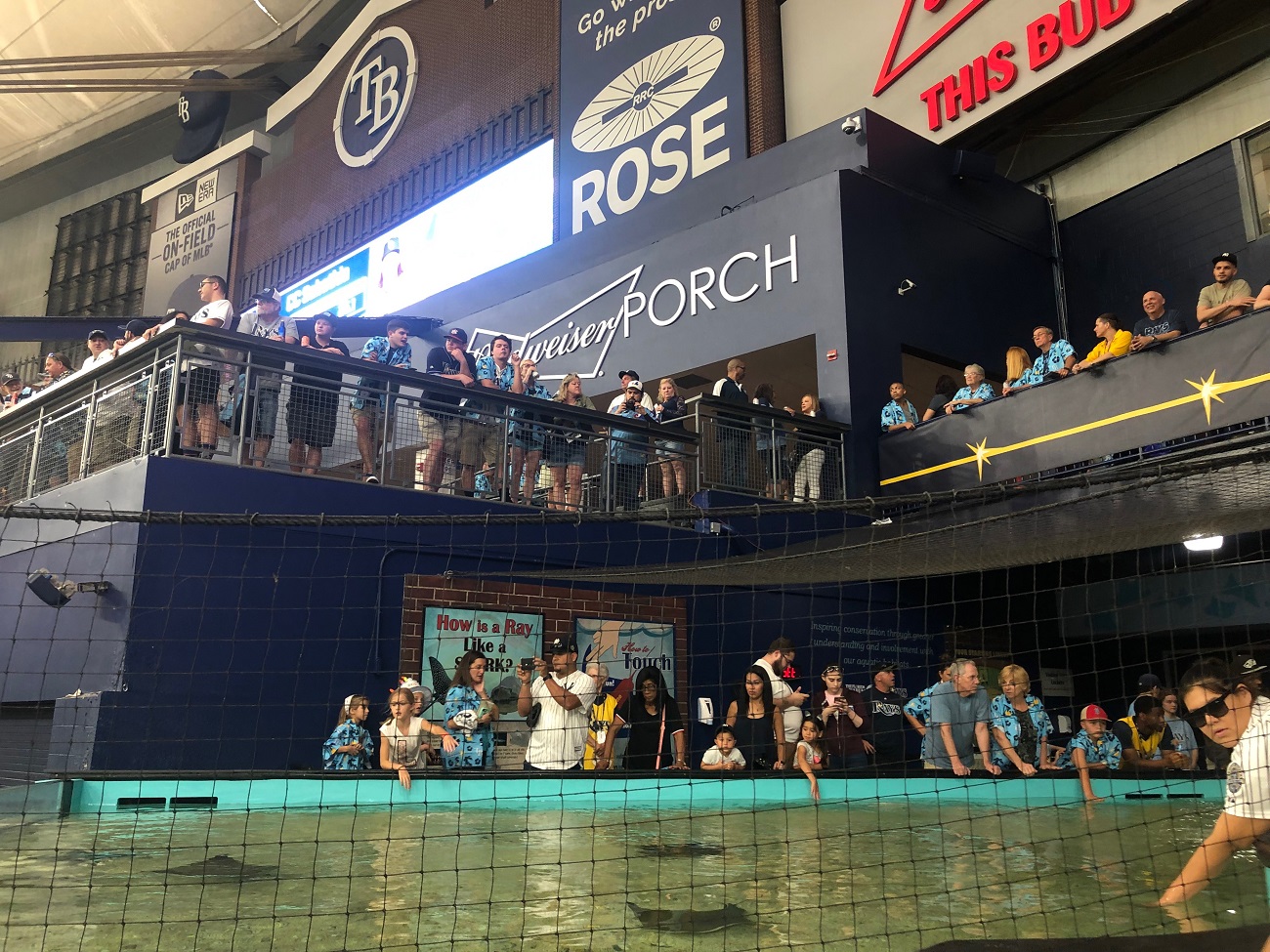 For the cons, I hate the white roof during the game. I lost the ball so many times when there was a pop-up, so that took me out of the game. Second, the concourses at times were pretty cramped and so were the bathrooms. There is not much the Rays can do with the venue, but this is an issue for sure. Third, I find it awkward that the entire upper deck is not open for fans in 2019. Finally, I don’t like the idea of a cashless stadium. There were a group of seniors next to me complaining that they could not get their ice cream because none of them had credit cards with them, so that was sad to hear.

The food was average at best at Tropicana Field. Fans looking for a variety should head out into the center field and see the food options there. You will find your standard hot dogs, ice cream, burgers, and more throughout the concourses at the venue.

Check out the Tropicana Field Food guide to see what to get at the venue!

I was at the second sell-out game at Tropicana Field in 2019 because the New York Yankees were in town. The Rays have the second worse attendance record in baseball, so my review is biased and that is why I’m only giving it a three and a half. The Yankee fans and Rays fans were loud throughout the game, but it had more to do with the matchup.

I had a great time at Tropicana Field. The New York Yankees and the Rays are my two favorite MLB teams, so it was a excellent match for me to see. All in all, I think this venue is better than people give it credit for sometimes. The roof design and look is awful, but having games in AC is great. The Rays have made so many improvements to the venue in 2019. Plenty of fun standing room sections in the stadium, cool lights in the roof, and more make this place have a strong repeat value. My only advice would be to book a trip when the New York Yankees or Boston Red Sox come into town so you can catch a fun atmosphere.

Another neat section within the Tampa Bay Rays Stadium is the Ted Williams Museum. It’s a bit hidden and not well advertised, so I’m here to shed light on the museum. If you head to the main team store and go to the second floor, you wills see the entrance. Inside the museum, you will see the Tampa Bay Rays history, Ted Williams career, famous pictures of past players, and more. 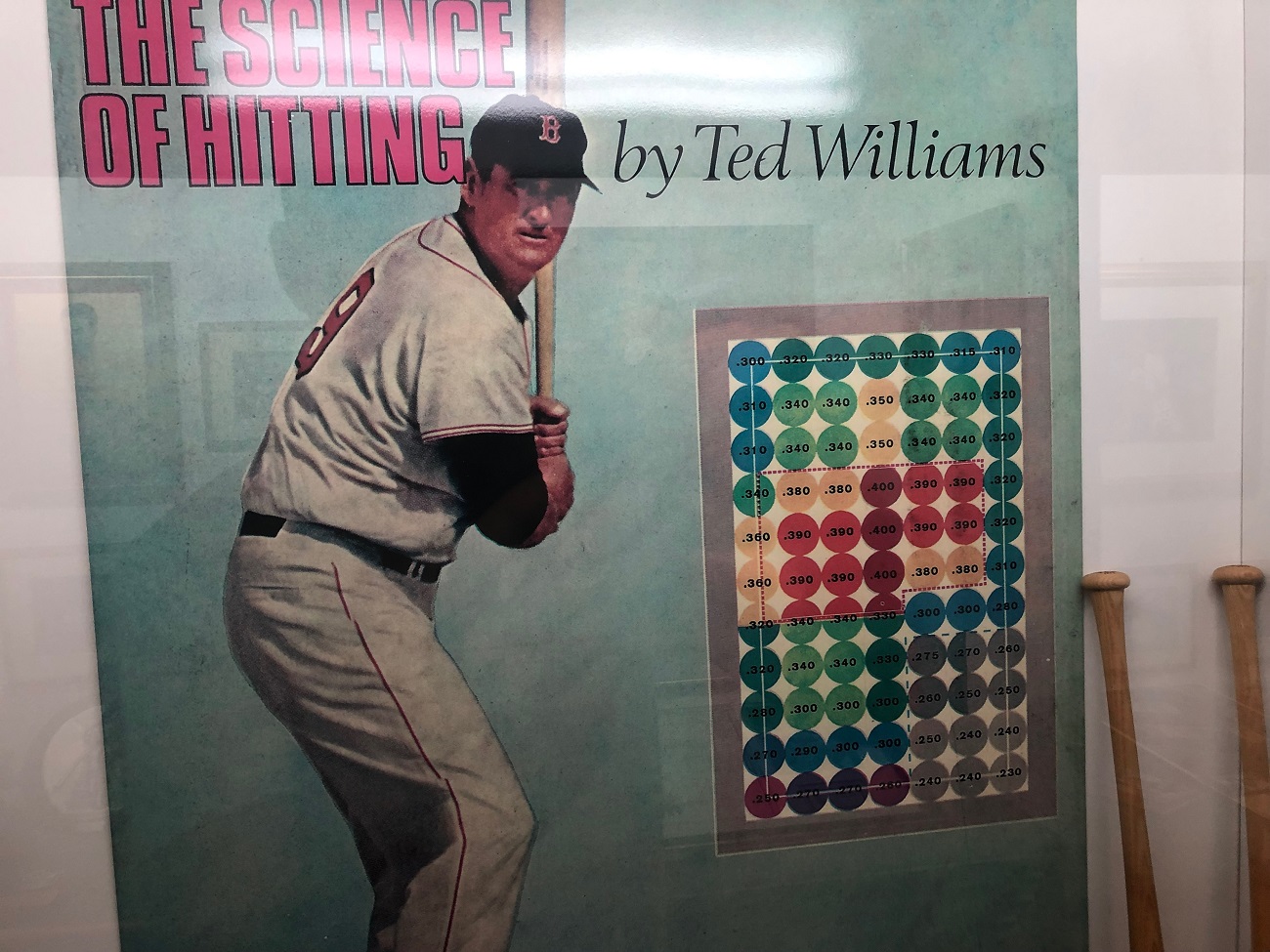