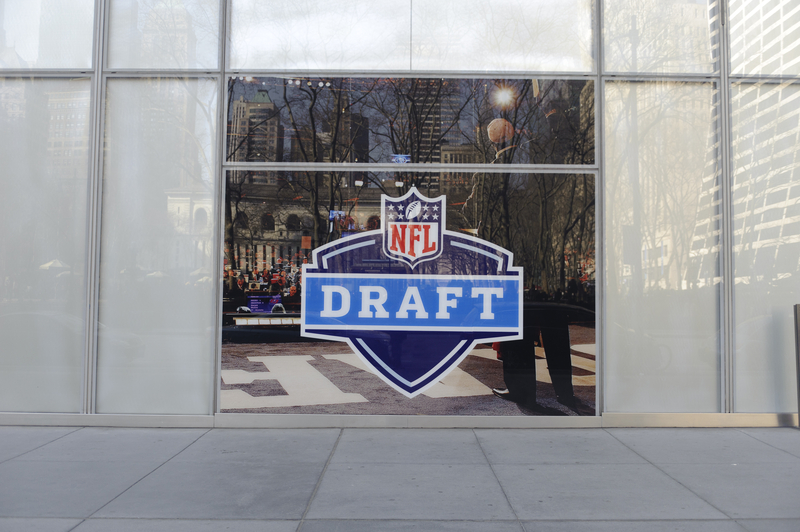 The NFL draft is one of the most exciting times of the year for fans and players each season. Getting a top player in the draft can be that missing piece for your team to make the playoffs in the future. S what exactly is the NFL draft, where is it held, what’s the order, and more? Find out below!

The National Football League Draft is the formal process that teams use to select rookie players. The format and technique have changed several times during the almost 90-year history of the NFL Draft, which is intended to make the selection process fairer for teams and exciting for fans.

Why Does the NFL Hold a Draft?

The NFL draft began as an attempt to bring more parity to the league. The actual process allowed the worst teams from the season before to have the best picks, which would cause the team to have the best opportunity to get the first-class talent. Often, the first-overall pick of the draft can be the best player on a team’s roster, which can help them rebuild and become more successful.

How does the NFL Determine Draft Order?

The NFL determines draft order based on how well a team did the season before. For example, in the 2021 draft, the Tampa Bay Buccaneers picked 32nd because they won the Super Bowl. Meanwhile, the Jacksonville Jaguars picked first because they had only one win and 15 losses in a 16-game season.

The Indianapolis Colts and the Los Angeles Rams are the two teams that have each made the most first-overall picks with seven each. Meanwhile, three teams have never picked first overall: The Denver Broncos, Seattle Seahawks, and Baltimore Ravens.

If two teams have a similar record, there are several tiebreakers established that help decides draft order. These tiebreakers are implemented in a specific order so that the process is consistent and fair for all teams.

Tiebreakers for Establishing a Draft Order:

3. Strength of Victory in All Games

4. Highest Combined Total of All Points Scored and All Points Allowed

The NFL will typically release the draft order ahead of time so that fans can anticipate which pick their favorite team will have. The league will also remove what tiebreakers apply. For example, in the 2021 draft, The Atlanta Falcons and Houston Texans had 4-12 records. However, the Texans picked ahead of the Falcons due to the strength of the schedule.

The NFL can also award specific picks to teams based on the free agents lost during the off-season. Depending on how long those free agents served with a group, the league may award these compensatory picks during the third round or later. While these tend to be late picks, teams can still find great talent later in the draft. Tom Brady, for example, was picked by the New England Patriots in the sixth round using a compensatory pick.

How Does a Player Enter the Draft?

The National Football League stipulates all players need to be at least three years removed from high school before being eligible for the draft. A player doesn’t have to go to college to fulfill that time requirement, though it’s often the best way to put on size and develop their football skills.

Players who don’t go to college have to wait four years, as the NFL rules require that four seasons have to pass after they graduate high school. This mandate incentivizes many players to play college football, which is great for college football fans. College football has some of the best up-and-coming talent to play in the NFL, so it’s great for players and fans.

In 2021, six players from Alabama went in the first round of the NFL Draft, tied with the University of Miami (Florida) for the most players from one school in a single year. The first round also had five quarterbacks selected, which is the second-highest in history. The first three picks overall were quarterbacks, including Trevor Lawrence from Clemson, who was first overall. Zach Wilson (selected by the New York Jets) and Trey Lance followed as the second and third picks in the draft. Kyle Pitts, a tight end from Florida, was the first non-quarterback to go in the draft and was selected fourth overall by the Atlanta Falcons.

What about the NFL Combine and Late Picks?

Most players will show off their skills in front of scouts at the NFL Combine or during the pro day at their school. These events run players through a series of drills, so scouts can evaluate how they might perform in a professional setting.

If a player becomes eligible for the draft after it’s already taken place, a team can select them in the supplemental draft that occurs over the summer. These very late picks sometimes become key players. For example, the Philadelphia Eagles selected Hall of Fame player Cris Carter in the 1987 supplemental draft. Carter later went on to play for the Minnesota Vikings and Miami Dolphins in his career.

What Can Teams Do With their Draft Picks?

A team doesn’t always have to pick a player with their draft pick. Instead, they can trade picks for assets in the regular season. For example, in 2019, the Houston Texans traded two first-round picks and a second-round pick to the Miami Dolphins for offensive tackle Laremy Tunsil. In 2021, that first-round pick turned into the third overall pick. The Dolphins then swapped that pick with the San Francisco 49ers. With a higher selection, the 49ers were able to draft quarterback Trey Lance.

It’s not unusual for teams to trade up during the draft to get a promising player or quarterback. In 2021 there were over ten trades throughout the first round. This number of transactions in the first round can make predicting the NFL draft incredibly difficult. Experts often share their predictions in various mock drafts that they publish, along with draft-day coverage.

When is the First Round of the NFL Draft?

The complete NFL draft takes place over three days. The first round of the NFL Draft is always on a Thursday. Typically speaking, you can see the draft on ESPN, ABC, and the NFL Network. There’s also plenty of additional coverage on NFL.com and each team’s local news network.

The first round starts at 8 PM, while the second and third rounds are televised on Friday, beginning at 7 PM. The final four rounds of the draft are on the third day, Saturday, and start at 11 AM.

During the draft, NFL teams have 10 minutes to announce their first-round draft pick. Then, they have seven minutes in the second round and five minutes for each round after that. While the NFL commissioner, Roger Goodell, announces most first-round pics, after that, there’s usually a variety of different announcers. Teams can have their general manager announce a pick or even fan favorites from the hall of fame.

Where is the NFL Draft Held?

Between 1965 and 2014, the NFL draft was held every year at various locations around New York City. However, starting in 2015, the draft started moving so more fans could attend. The league requires teams to submit bids for the right to host the draft, with the Chicago Bears winning the first two bids for 2015 and 2016.

The Las Vegas Raiders were supposed to host the draft in 2020. However, nationwide lockdowns forced the event to go virtual. Since the 2021 draft was in Cleveland, the league said the Raiders would host the 2022 event. The Kansas City Chiefs won the bid for the 2023 draft.

Conclusion about the NFL Draft

The National Football League Draft is the primary way that teams acquire new rookie talent. The draft aims to promote parity in the league by allowing the worst team in the previous season to pick higher in the draft. Higher picks usually translate to better, more talented players who can seriously affect a team’s success.