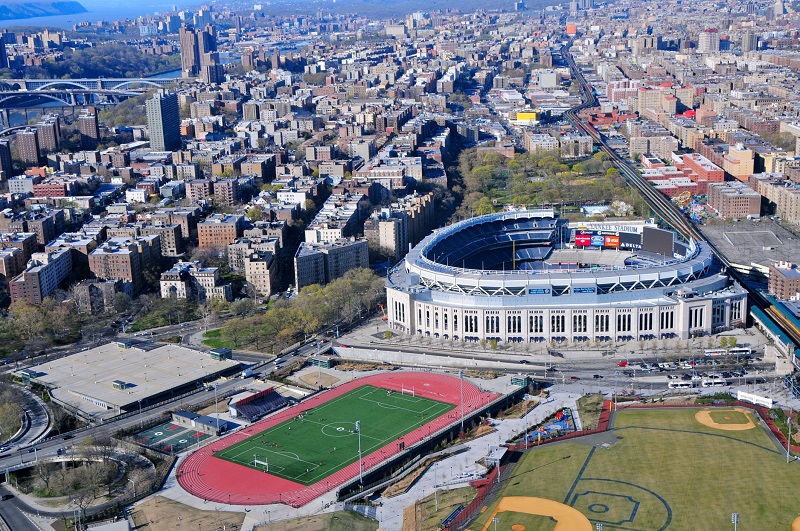 Yankee Stadium is the home of the New York Yankees baseball team in the Bronx, NY. The stadium that Steinbrenner built sits right outside the major deegan expressway interstate, so fans can take that coming from upstate New York, Manhattan, or New Jersey. The official address of the stadium sites on 1 East 161st Street, Bronx, NY 10451.

With the ballpark being in New York City and the Yankees being extremely popular, you should be familiar with parking near Yankee Stadium for your next Yankees game. This guide will act as a compass for you to find parking for game day in the Bronx. One piece of advice is to arrive early at the baseball game due to the large crowds that show up at the venue. Here are the Yankee Stadium parking tips and the New York Yankees parking guide below.

Is there Handicap Parking at Yankee Stadium?

There is handicap parking lots and garages at the New Yankee Stadium. Fans looking for handicap Yankee Stadium parking can use the garages that surround the park for a baseball game. There are parking garage staff members who can help direct fans to where they need to park if they have any questions. Fans will need to have a valid parking pass to park their car for day parking and night games.

Is there Tailgating at Yankee Stadium?

Yankees fan can tailgate at a few parking lots around the Stadium hours before game time. The lots that have tailgating  are operated by Quik Park. Some fans pre game at the lots around the stadium with beers, grills, and tables. With tailgating, you can’t save spots in the garage for your friends, have open fires, or take up more than one space with your vehicle.

If you would rather check out bars before the game, you should check out Stan’s. There are plenty of food options that surround the stadium including fast food to some small sit down restaurants. Fans can also consider checking out NYY SteakHouse or the Hard Rock Cafe that are part of Yankee Stadium, but don’t need a ticket to get in. Most fans enter through the grand concourse between gates 4 and 6 since that is near Stan’s and where the trains come in. Yankees fans can also head into the bleacher entrance where monument park sits if they would like to get into the bleachers.

How Much is Yankee Stadium Parking?

To reserve your parking spot, visit the Yankee Stadium SpotHero Parking Page and book a spot with rates up to 50% off drive-up.

If you plan to park in Yankee Stadium parking lots, you can expect to pay $40. Parking near Yankee Stadium can find cheaper parking deals when you use SpotHero above.

Where Can I Park for Free?

Fans looking to save money will have to walk about a mile to the stadium, but there is a section that is very cheap near the stadium. If you park at MTP Parking’s 265 Edgecombe Ave, you can park for 7 hours for a dollar an hour. Dozens of Yankees fans take advantage of this hidden opportunity when catching a baseball game. There is someone who is always working the parking spot lot, so while not free, you can’t find a better deal anywhere close to the stadium to park at. In addition to that, fans can also take advantage of city parking if they can find a spot before first pitch.

Should I take Public Transportation?

Fans also can use the bus if they live or are staying on a bus route. The Bx6 and Bx13 buses arrive right at Wast 161 Street and River Avenue, so you are right next to the facility via walking distance. Fans can also use the Bx1, Bx2, and BxM4 buses will also bring you the venue. Leaving the game has a lot of road traffic, so taking the bus after a game might be tough. Once you get on the Major Deegan Expressway Interstate 87 heading upstate, you should experience less crowds on the road.

Across the George Washington Bridge, you enter New Jersey where the New York Jets and Giants play at MetLife Stadium, If you are looking for MetLife Stadium parking, you can visit that link. Heading down the Bronx, you get to Madison Square Garden where the NBA and NHL New York teams play. Check out Madison Square Garden parking if you heading down there. Finally, you can head over to Queens to check out the Mets at Citi Field. Here are the parking tips for Citi Field.