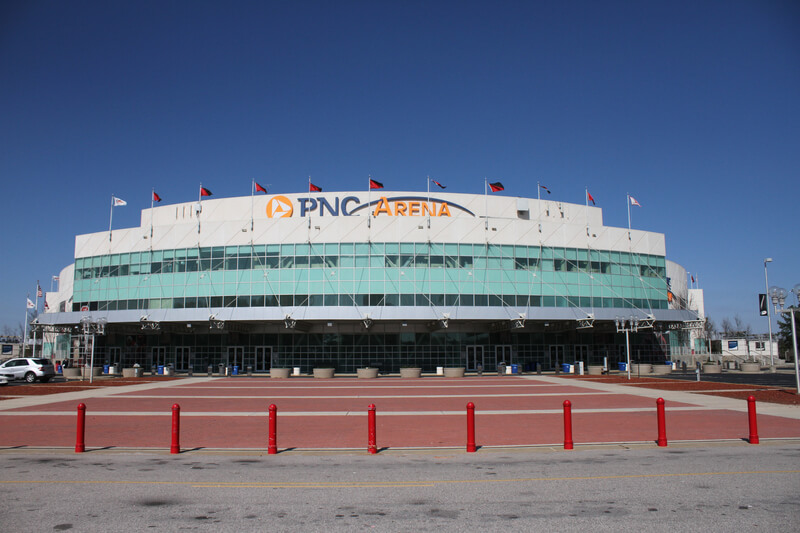 Parking Near PNC Arena for the Carolina Hurricanes

PNC Arena (formerly known as Raleigh Entertainment & Sports Arena and the RBC Center) is home to the NHL Carolina Hurricanes team in North Carolina. In addition to hockey games, the arena is also home to the NC State Wolfpack men’s basketball team. The arena’s address sits at 1400 Edwards Mill Rd, Raleigh, NC 27607. In addition to sports games, you can find many concerts and events at the arena year round too.

How Much is PNC Arena Parking Lots?

If you plan to park in the PNC Arena parking lots, you can expect to pay $20. Limousine, Bus, Mini-Bus, and RV parking goes for $40 a spot. The first 300 cars that enter the venue get $10 off their parking spot as tip.

Handicap parking is in the East and West parking lots at PNC Arena. Handicap parking comes on a first-come basis, so it’s best to arrive early at events. Fans will need to present a valid parking pass and placard to keep their car in the handicap spaces too.

Tailgating takes place in the parking lots before all Hurricanes hockey games. Fans can only tailgate either in front of or behind their car as a reminder. You can’t tailgate in an open parking space in the parking lots due to the availability of certain events. If your group requires additional tailgating space, you should head over to the Carter-Finley grass lots.

Carolina Hurricanes games are exciting to catch if you are in the area. Expect more fan interest when the New Jersey Devils, Philadelphia Flyers, New York Rangers, Ottawa Senators, and Nashville Predators visit. Other big games in the area include the San Jose Sharks, Boston Bruins, Vegas Golden Knights, and Toronto Maple Leafs.

NCSU Wolfpack basketball games are exciting to catch if you are in the area. Expect more fan interest when the Duke Blue Devils come and visit.

Many events take place in the arena for fans to check out all year round. Some concerts include Celine Dion, Martin Lawrence, Billie Eilish, Zac Brown Band, Other events include Fantasia, Disney on Ice, UFC Fight Night, Jurassic World, and Monster Jam.