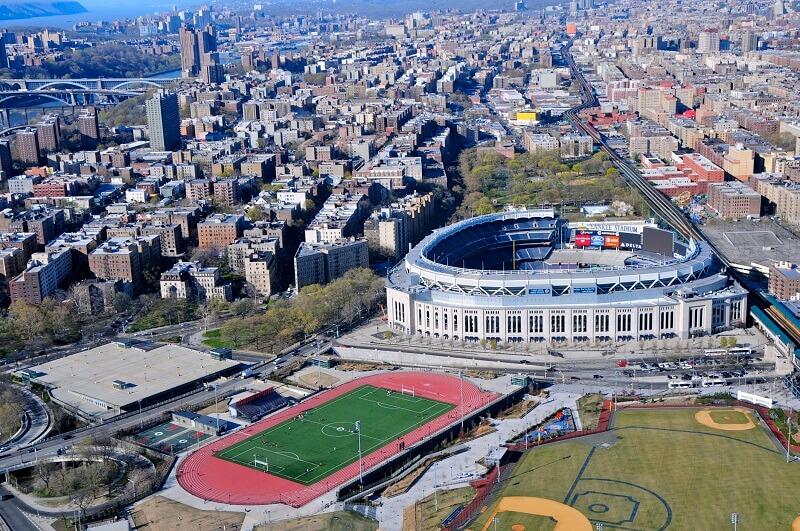 Here is the guide to Yankee Stadium Parking below.

How Much is Yankee Stadium Parking Lots?

If you plan to park near Yankee Stadium, you can expect to pay $40. Unofficial Yankees parking lots or garages near the ballpark will have cheaper parking rates for fans to use. Fans can use the SpotHero listing above to find parking options and save money on parking for any Yankees game!

Is there Handicap Parking at Yankee Stadium?

Handicap parking is available for fans to uses in the lots that surround the stadium for events and baseball games. ADA parking spaces may fill up quickly for certain events, so fans should use SpotHero to reserve a parking space before driving to the venue. Fans will need to have a valid parking pass to park their cars in the handicap spaces. Finally, fans can ask any handicap parking questions to the parking attendants at the arena if they need assistance.

Is there Tailgating at Yankee Stadium? 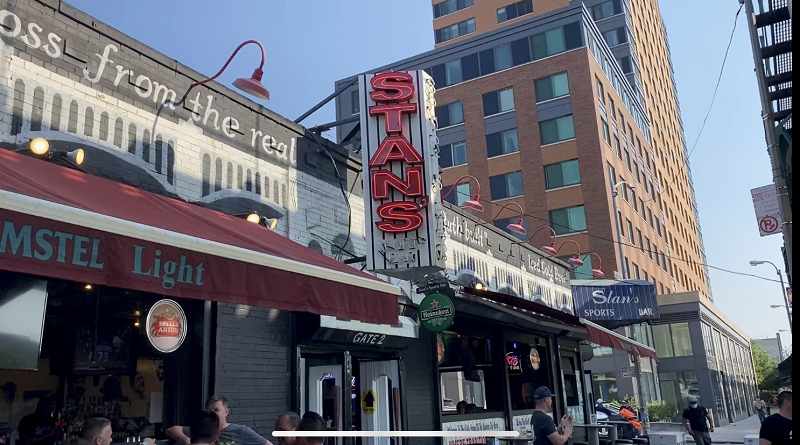 Tailgating in the parking lots at Yankee Stadium can happen, but most fans head to the local bars before a baseball game. Local bars around Yankee Stadium include The Dugout, Vega Alta Sports Bar, and Billy’s Sports Bar and Lounge. In addition to those bars, fans also visit Stan’s Sports Bar, Hard Rock Cafe, NYY Steakhouse, and Yankee Tavern before first pitch.

Also, if you are going to a NYC FC match, consider getting to Stan’s bar 1 hour before kickoff. The Supporters’ will march to Yankee Stadium to cheer on NYC FC, so consider joining them if you want to get a true soccer experience!

Should I take Public Transportation to Yankee Stadium? 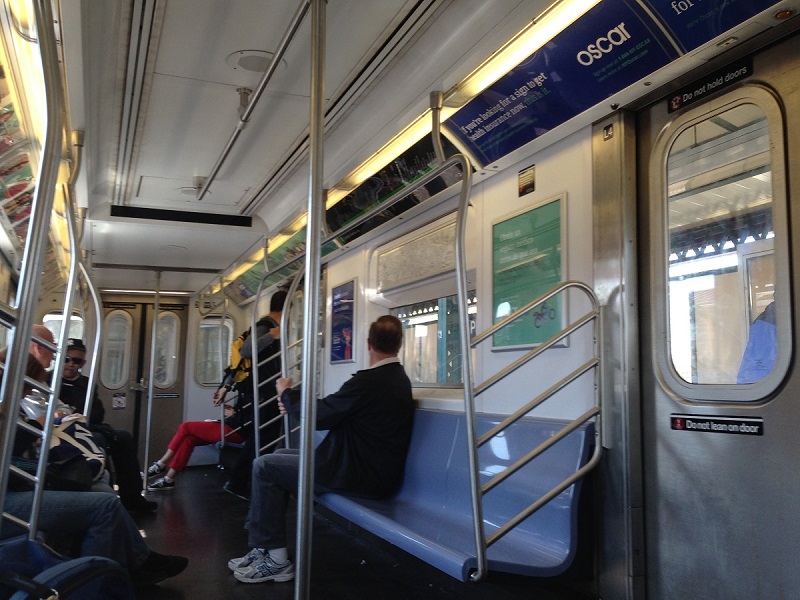 Can you Bring Snacks to Yankee Stadium? 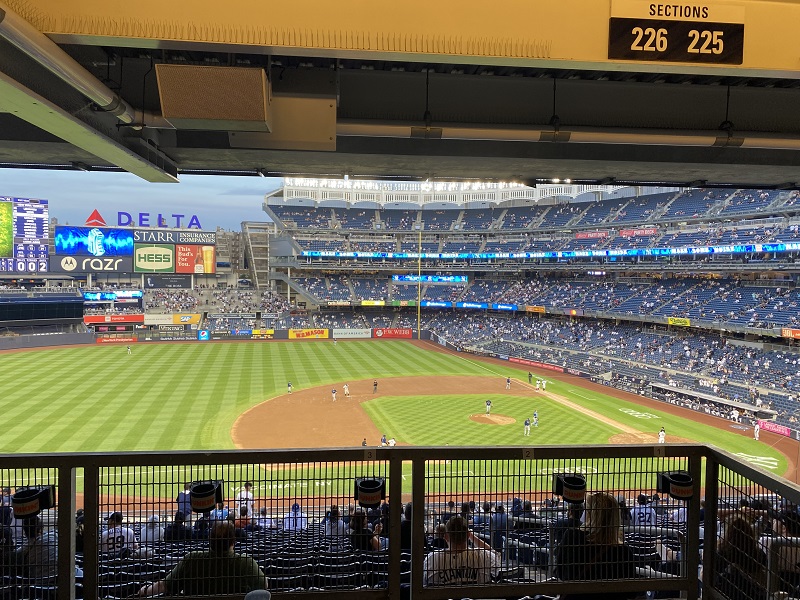 Yankee Stadium allows guests to bring in snacks into the stadium for a baseball game. All food needs to be brought in a clear plastic bag and is subject to checks by the Yankees security at the gates. No outside food can be brought into the lounges, but the food you bring is up to you.

Check out the Yankee Stadium Food options before your next trip to the venue!

Can you Bring Water Bottles to Yankee Stadium?

Smoking is not allowed inside Yankee Stadium. Smokeless tobaccos is also prohibited from the stadium. Check out the full smoking policy guide to learn more.

How Early Does Yankee Stadium Open Before a Game? 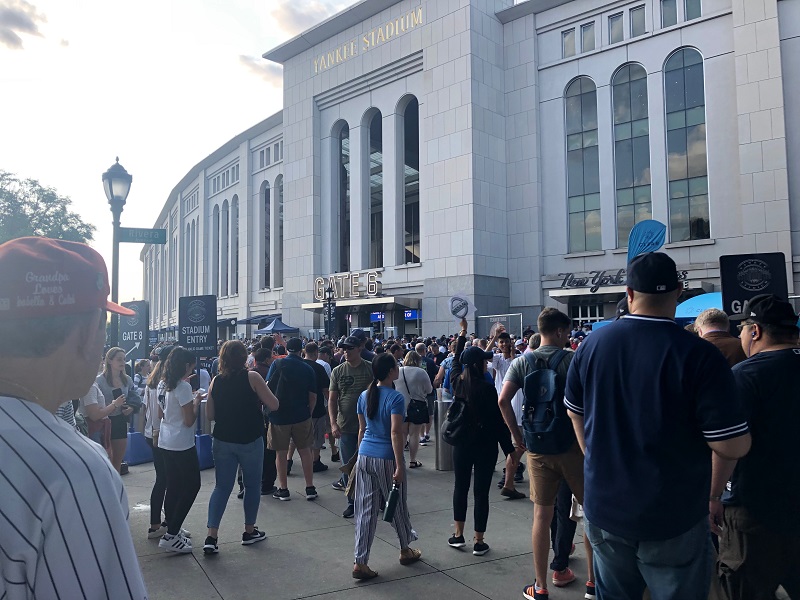 Gates open one and half hours before first pitch Monday through Thursday. For a Friday night game, you can get into the stadium three hours early. Saturday games that start at 4 or 7 allow fans to arrive three hours early as well. 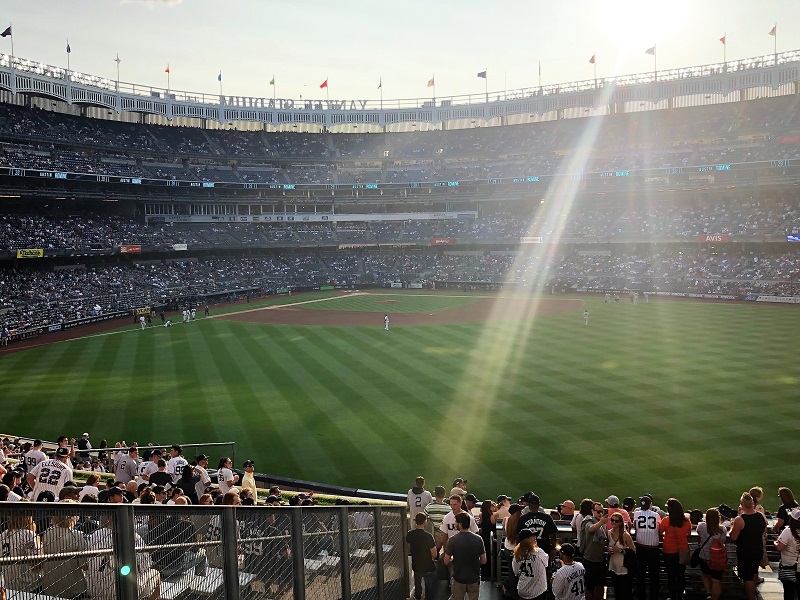 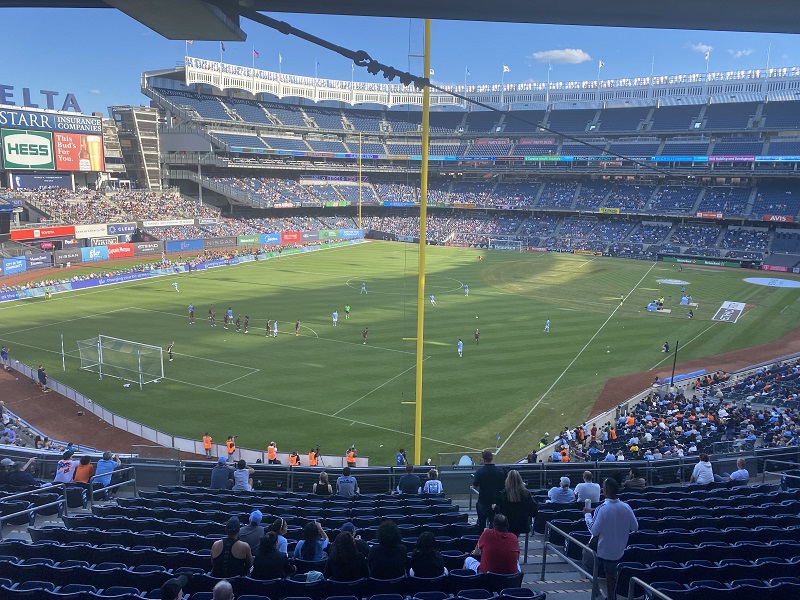 Outside of the MLB games at Yankee Stadium, you can expect large crowds for additional events year round. The NYCFC play in the venue as well, so expect big crowds when the New England Revolution, Atlanta United FC, New York Red Bulls, and Toronto FC come to town.

In addition to NYCFC MLS games, Yankee Stadium also hosts other soccer games at time at the venue. For example, Manchester City FC and Liverpool have played games at the stadium via friendly matches.

Can You Leave Luggage and Bags at Bars Outside Yankee Stadium?

Plenty of bars that line up next to Yankee Stadium will happily hold onto your bags for about $10. However, one tip is to arrive an hour before a game or event to secure one of these lockers since specific matches might sell them out quickly. Otherwise, you can ask some bars and store owners outside Yankee Stadium where to drop off your bags.

For football, you can expect large crowds when the Princeton Tiger and Dartmouth Big green come in for football. Finally, you will find plenty of concerts taking place at Yankee Stadium, so the stadium is always is use!

Also, New York City has plenty of other teams in the area for fans to enjoy. Fans can check out Citi Field parking, Madison Square Garden parking, Barclays Center parking, and MetLife Stadium parking tips if they want to explore the other city’s teams.