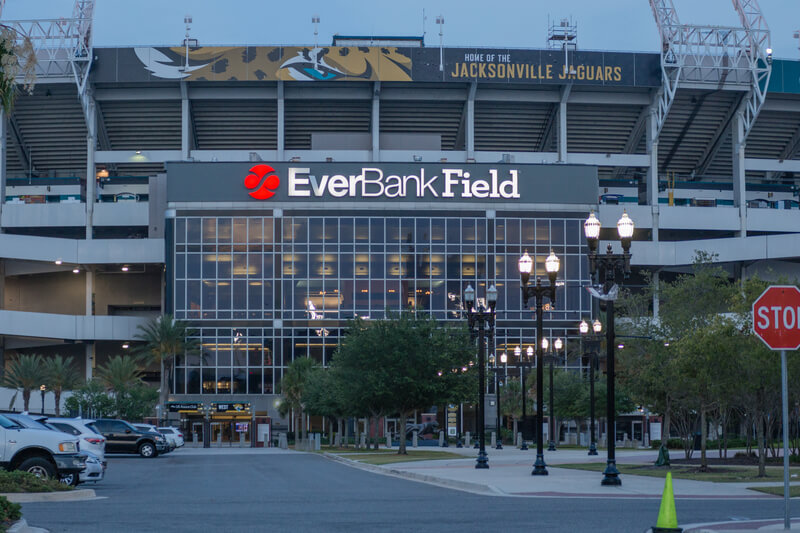 TIAA Bank Field (Jaguars Stadium) is home to the Jacksonville Jaguars NFL team. Here are the parking tips for the football venue!

How Much is TIAA Bank Stadium Parking?

If you plan to park in the TIAA Bank Field parking lots, you can expect to pay $30. Lots G, H, Z, and Sports Complex Parking Garages go for $30 for Jaguars games. Parking lots open up four hours before each Jaguars game. Finally, fans can find cheap parking near TIAA Bank Field using SpotHero above.

There are ADA stadium parking spaces available for all Jaguars NFL games at the venue. Jags fans will need to show a valid parking pass and state-issue license plate to leave their vehicles in the ADA parking lots. ADA parking spaces can fill up quickly for certain events, so use SpotHero above to reserve a parking space.

Can you Tailgate at Jaguars Stadium? 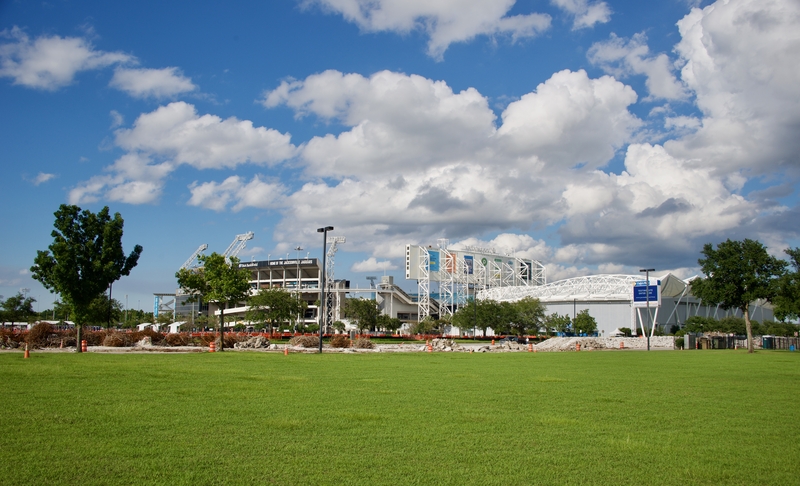 The North Parking Lot at TIAA Bank Field has tailgating parties before a football game. Fan can bring gas grills for cooking, but open flames can’t happen in the parking lots.  Tailgating begins four hours before kick-off and the lots stay open 2 hours after the final whistle.

Finally, fans can visit the local bars near TIAA Bank Field before the game. Some bars include the Justice Bar, Bold City Downtown, Dos Gatos, and Bay Street Bar and Grill. In addition to those bars, you can also visit Laugh Lounge, Cuba Libre Bar, and The Volstead.

Can you Bring Outside Food to TIAA Bank Field?

Smoking is not allowed within TIAA Bank Field.

A shuttle service, which runs 2 hours before kick-off,  brings fan to and from TIAA Bank Field from several locations. The shuttle service, JTA (Jacksonville Transportation Authority), brings fans from downtown Jacksonville and the suburbs to the game. Taking the JTA is a popular option if you don’t want to deal with the hassle of finding Jacksonville Jaguars parking. In addition to JTA, fans typically rely on Uber and Lyft to get to and from the arena.

Popular NFL Matches for the Jaguars 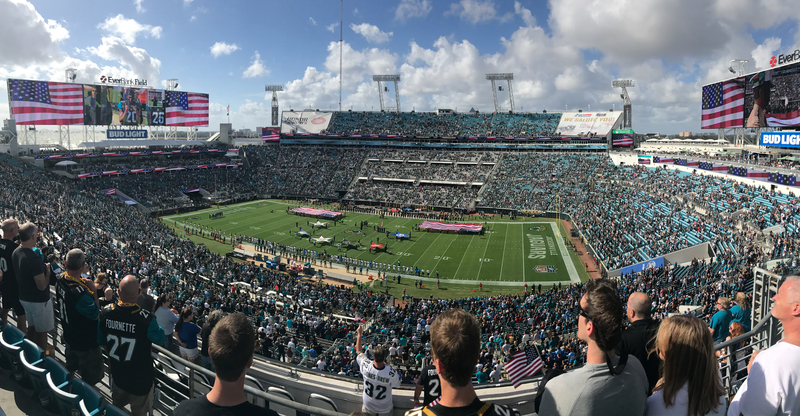 Games against the Atlanta Falcons, Tennessee Titans, Kansas City Chiefs, Indianapolis Colts, New England Patriots, Pittsburgh Steelers, and New Orleans Saints always have many visiting fans. In addition to those games, New York Jets, Tampa Bay Buccaneers, Philadelphia Eagles, and Los Angeles Chargers all bring in many fans to the venue. Finally, you can find cheap football tickets for the Jaguars during the preseason each year.

In addition to NFL games, TIAA Bank Field is more popular for college football games than NFL games in the area. Matches that draw lots of fans include Boise State Broncos, Florida State Seminoles Football, Florida Gators, and more. The Taxslayer Gator Bowl is also a big draw for college football fans at the stadium too.

In addition to football games, you have many concerts, the worlds largest outdoor cocktail party, comedy shows, and other events that take place in the arena year round. The stadium was also host to One Super Bowl against the New England Patriots and Philadelphia Eagles.

Some of the names before TIAA Bank Field were EverBank Field Jacksonville Municipal Stadium, and Alltel Stadium. While many names have been in place since 1995, the arena still sits out at 1 TIAA Bank Field Dr, Jacksonville, FL 32202. The venue took over for the Gator Bowl Stadium which sits out on 10 acres of land in downtown Jacksonville.