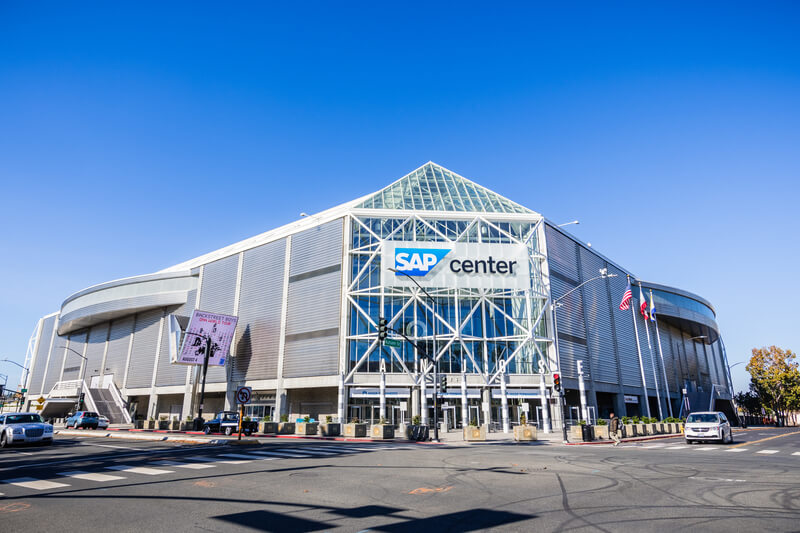 Parking at SAP Center for the San Jose Sharks

SAP Center (formerly known as San Jose Arena) is home to the NHL San Jose Sharks and AHL San Jose Barracuda teams. The arena’s address out in the bay area sits at 525 W Santa Clara St, San Jose, CA 95113. In addition to hockey games, you can find many concerts at the arena year round. Finally, Levi’s Stadium sits fairly close to the arena where the San Francisco 49ers play football. If you are looking for Levi’s Stadium parking, you can visit that link.

How Much is SAP Center Parking?

If you plan to park in the SAP Center parking lots, you can expect to pay $15. There are over 6,000 parking spots in a 1/2 mile radius around the venue for fans to check use for parking. Parking lots open up 2.5 hours before San Jose Sharks games. Fans can use SpotHero above to find cheap parking near SAP Center before their visit.

There are ADA parking spaces available for fans to use at both parking lot entrances at the stadium. Guests will need to show a valid handicap parking pass along with valid placard to park in these spaces. Parking attendants can help direct you to where you should park if there are any questions. Finally, ADA parking is first come first serve, so reserve your parking space above using SpotHero.

There is no tailgating in the parking lots at the venue, but there are plenty of bars around to visit before a game. Some bars include Patty’s Inn, Firehouse Number 1, and Britannia Arms. Finally, fans also like to visit SP2 Communal Bar and Restaurant, O’Flaherty’s Irish Pub, and Rookies Sports Lodge before and after a hockey game.

Many events take place at the hockey arena year-round for fans to enjoy. Some concerts include Harry Styles, Andrea Bocelli, Trans-Siberian Orchestra, Poptopia, Silent Night with Mumford and Sons, and Miranda Lambert Wildcard Tour. Other events at the venue include the Harlem Globetrotters,  Stars on Ice, Disney on Ice, and Unleash the Power Within.