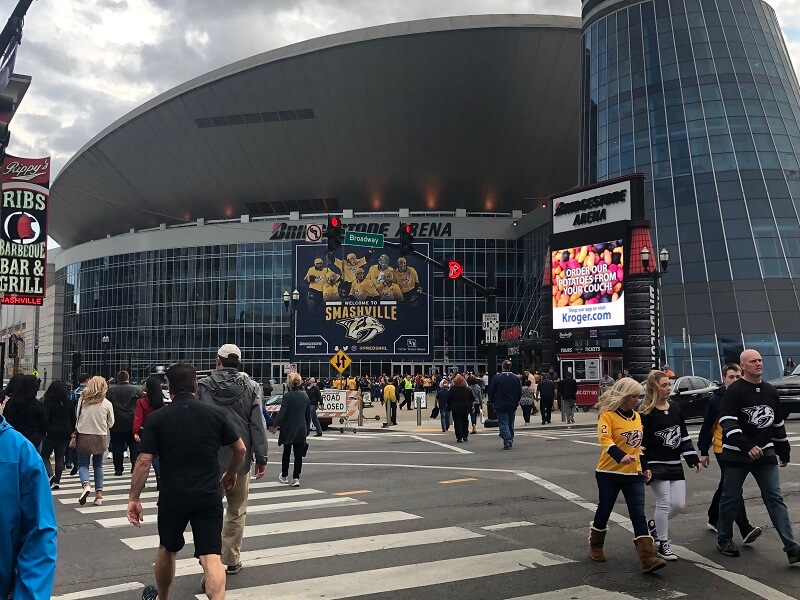 Parking at Bridgestone Arena for the Nashville Predators

Bridgestone Arena is home to the NHL Nashville Predators out in downtown Nashville, Tennessee. The arena’s address out sits out at 501 Broadway, Nashville, Tennessee 37203. Nissan Stadium sits about a mile and a half away from the hockey venue where the NFL team plays. If you are looking for Nissan Stadium parking, you can check out that resource. In addition to hockey games at the arena, you can find many concerts and events too all year around.

How Much is Bridgestone Arena Parking?

If you plan to park in the Bridgestone Arena parking lots, you can expect to pay between $10-$30 a spot. Many unofficial private parking lots and parking garages around the stadium have lower parking prices depending on where you park. Additionally, you can discover free parking at Nissan Stadium where the NFL Tennessee Titans play. Lot R, at Nissan Stadium, offers free parking and round trip shuttle service for $3 per person.

Handicap parking spaces are available for all fans in the 6th Avenue Garage at the hockey arena. Accessible entrances are at the 5th Avenue Broadway Entrance and the Demonbreun Entrance. Handicap parking comes on a first-come basis, so it’s best to arrive early for handicap Bridgestone arena parking. Finally, fans will need to present a valid handicap parking pass to leave their vehicles in these ADA spots.

There is no tailgating at the venue, but there are plenty of bars to check out in downtown Nashville on Broadway street before or after a game. Some bars include Lexus Lounge, Pete & Terry’s Tavern, Ripley’s Bar & Grill, and The Rec Room. Other bars to check out include The Second, Fiddle, Layla’s Honky Tonk, and Tequila Cowboy.

Should I Take Public Transportation

Fans looking to take public transportation to the arena can use the Music City Circuit. The Music City Circuit serves popular destinations, including Bridgestone Arena, Schermerhorn Symphony Center, Ryman Auditorium, Tennessee Performing Arts Center, and more. Additionally, fans can also use an Uber or Lyft to get to and from the venue. Look for the official pick up and drop off area on 5th Avenue across the Music City Center.

Expect Predators games to be more difficult when the team makes the playoffs. Home games for the Predators in the playoffs have high demand, so plan accordingly. The Predators have never won the Stanley Cup, but their fans are passionate and always show up for games.