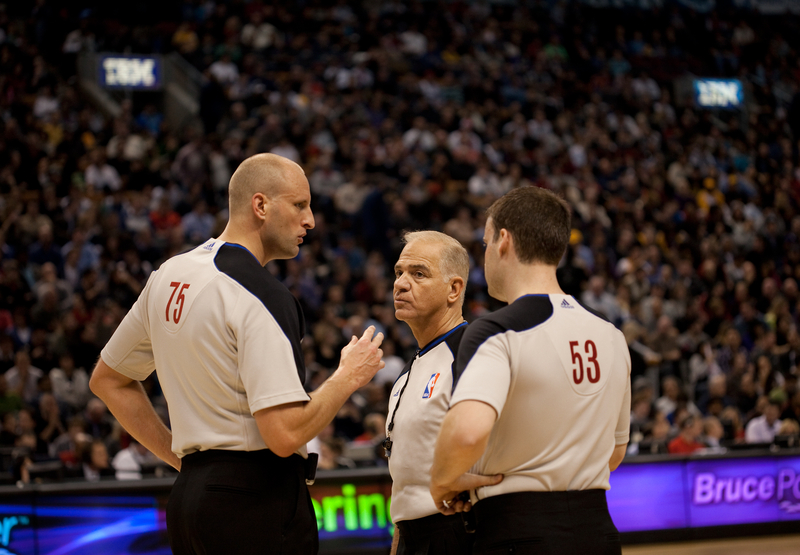 While NBA referees might not have the same fame and star power that NBA players do, they play a critical role in the sport. They need to be physically fit, understand the rules and regulations, and be extremely observant. Not to mention that NBA refs need to be confident and resolute in their decisions with speed. Referees’ calls can totally change the outcome of an NBA game, so they can sometimes attract a lot of attention—both positive and negative.

Have you ever watched a ref run up and down the court for a full game without missing a step, or make a difficult, controversial call with absolute confidence—and you wonder, “How much do NBA refs make? Because it can’t be enough!”

While basketball referees will certainly never make a salary on par with Kevin Durant or Lebron James, NBA referees do get paid fairly well for their efforts and make a large annual salary with benefits. Below you’ll learn about how much NBA refs make each season and how their salary is broken down.

What is the Average Salary of an NBA Referee?

As with any profession, there are several salary tiers for NBA referees. As they gain more skills and years of experience, they are able to earn higher salaries. There is not a lot of transparency around referee salaries so there is some conflicting information out there, but here is the general consensus on how much they seem to be making.

Entry-level NBA referees are the most junior NBA officials and on average can expect to make about $250,000 per year or $600 per game. And while they are the most junior officials in the NBA, that doesn’t mean they are new to the sport. NBA referees usually work their way up from youth or high school leagues to the NCAA. Then only the most talented refs advance to the G-League, and then onto the NBA.

After gaining 3–5 years of officiating experience in the NBA, entry-level refs can be promoted to senior-level refs and expect to make closer to $500,000 per year or $3,500 per game at the top of the range.

What is the Average Salary of an WNBA Referee?

Since the Women’s National Basketball Association is not as profitable as the NBA and they work a much shorter season, WNBA officials make a lot less than their NBA counterparts. An entry-level WNBA ref makes on average $16,000 per year or $425 per game. Although there is some disagreement here, as some sources actually list as high as $180,000 per year.

Do NBA Refs Get Paid Per Game?

The salary of an NBA ref can be highly variable since they are paid per game rather than a yearly salary. This really kicks in during playoff games because the high stakes and high profitability of those games mean that the refs get paid a much higher rate than they do for regular-season games. Only the best senior referees officiate NBA playoff games and can expect to earn almost $10,000 per game in the first two rounds and up to $30,000 per game for semi-finals and finals games.

Do NBA Refs Pay for Travel?

Just like the players, NBA referees are on the road nearly full-time throughout the season and travel for every game. The regular season lasts for eight months and postseason games can extend that even longer. On average, NBA refs travel for 25 days out of every month.

All that travel could get expensive, so in addition to their pay per game, refs receive benefits like travel stipends as part of their compensation package. This means that refs don’t have to pay out of pocket for all of their travel expenses. However, there is not much public information about how much the travel stipends actually are so it is unclear if these stipends cover the entire cost of travel.

Who is the Highest-Paid NBA Referee?

In the 2021 season, there are nine NBA referees who make $550,000 per year. Their rates are $7,000 per regular-season game, $9,000 per playoff match game, and $29,000 per semi-finals and finals games. The referees with teh most experience make the most money to officiate these games.

NBA referee salaries weren’t always this high. Salaries started skyrocketing in the early eighties and have increased significantly in the last decade as investment in the NBA and the popularity of basketball have increased.

Until recently, Joseph Crawford was the highest-paid NBA referee with a salary of $166,000 at the time of his retirement in 2016. Crawford had a 39-year career and worked 2,561 regular-season games, 313 playoff games, and 50 NBA finals.

How do NBA Referee Salaries Compare to other Sports Officials?

NBA officials tend to make the most in all professional sports. The justification of basketball officiating is that it requires fast judgement. Also, NBA refs have to officiate very close to fans, which makes it even more stressful.  Therefore, NBA jobs are very competitive and there is low turnover in the league. However, refereeing in any sport is still a lucrative gig. On average, NFL referees make an annual salary of about $205,000, NHL referees make about $275,000 per year, and MLB umpires make about $300,000 per year

Why Do Basketball Players Wear Tights and Sleeves

What is a Free Throw in Basketball

What is a Triple Double in Basketball?