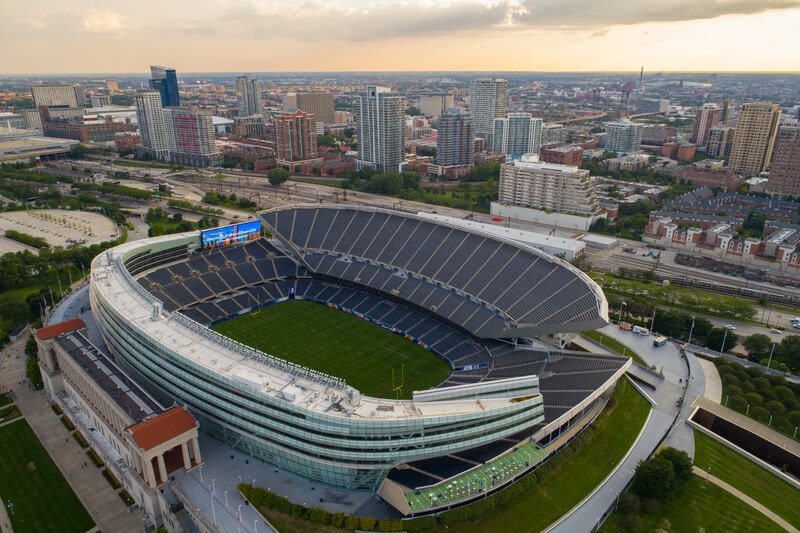 Soldier Field is home to the Chicago Bears NFL team in Chicago, Illinois and is the second oldest NFL stadium in the game. The arena is out on 1410 S Museum Campus Drive, Chicago, Illinois. In addition to football games, you will find plenty of concerts and events at the arena year round. Finally, Chicago is also home to baseball at Wrigley Field and Guaranteed Rate Field. If you are looking for Wrigley Field Parking or Guaranteed Rate Field Parking, you can check out those links. Also, you can find professional hockey and basketball in Chicago at United Center. If you are looking for United Center Parking for either team, you can check out that link.

How Much is Soldier Field Parking?

If you plan to park in the Soldier Field parking lots, you can expect to pay $30. Fans looking to save money on parking can venture out to the 15 E 14th PL parking lots. These parking lots go as low as $15, but are a twenty minute walk to the venue. Fans can use SpotHero above to find cheap parking near Soldier Field for any game or event!

There are ADA parking spaces available in all parking garages that have wheelchair ramps at the venue. Bears fans will need to show a valid parking pass and state-issue license plate to leave their vehicle in the parking lots. Accessible parking options for games are at a first-come-first-served basis, so use SpotHero above to reserve your ADA parking space before driving to the venue.

Tailgating in the parking lots at Solider Field is part of the fan experience when coming to a Chicago Bears football game. Tailgating takes place in all official surface lots and the upper level of Waldron Deck. Parking spaces open up four hours before kick-off, so plan to arrive early. In addition to tailgating, fans can venture to the local bars before and after a game. Popular bars near Soldier Field include Weather Mark Tavern, Victory Lap Chicago, The Bureau Bar, and M Lounge.

There are many public transportation options for Bears fans to use to get to and from the stadium. The CTA bus red, green, and orange routes bring fans to Roosevelt Station near the venue. Roosevelt Station is about a 15-minute walk to the stadium, so it’s a great option. Bear Fans can also take the Metra on game day to the stadium. The train has stations between University Park and Kensington as wells, so the train is a popular choice. Finally, fans can use Uber and Lyft to get to and from the arena.