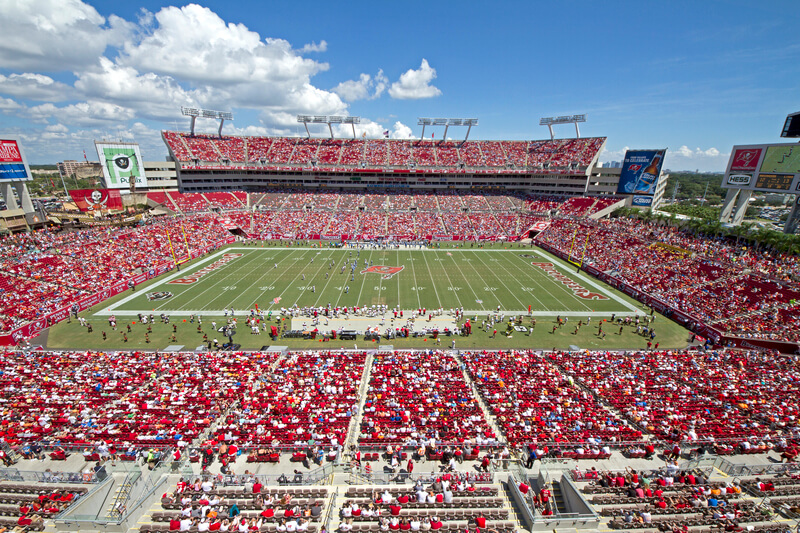 Parking near Raymond James Stadium for the Tampa Bay Buccaneers

Raymond James Stadium is home to the Tampa Bay Buccaneers NFL NFC team in Tampa, Florida. The arena is out on 4201 N Dale Mabry Hwy, Tampa, FL 33607 United States. In addition to NFL games, Tampa is also home to professional hockey at Amalie Arena and baseball at Tropicana Field. If you are looking for Amalie Arena parking, or Tropicana Field parking, you can visit both links.

How Much is Raymond James Stadium Parking?

If you plan to park in the Raymond James parking lots, you can expect to pay $30. Camper and bus parking in lot 8, 13, and 14 is generally more expensive. Fans can use SpotHero above to find cheap parking near Raymond James Stadium for any football game or event.

There are ADA parking spaces available in the lots A and E for fans to use at the football stadium. Buccaneers fans will need to show a valid parking pass and state-issue license plate to leave their vehicles in these parking lots. ADA parking comes at a first come and first serve basis, so use SpotHero above to reserve a parking space. Finally, you can direct any questions on where to park to the parking attendants at the stadium.

Tailgating in the parking lots happens before a Tampa Bay Buccaneers or South Florida Bulls football game. Fans typically arrive early to set up their tailgating spot before each football home game. In addition to tailgating in the parking lots, you can also visit the local bars near the stadium. Fan favorite bars near the football stadium include WingHouse Bar and Grill, Davidoff of Geneva, and Thai Prime Kitchen and Bar.

Fans coming from downtown Tampa can use the 30 and 36 bus lines to get close to the venue on game day. In addition to taking the bus, fans typically use Uber and Lyft to get to and from the arena. Fans can use the Steinbrenner field parking lot to call Uber rides after a football game.

For USF (University of South Florida) games, you’ll find specific matches bring in many visiting fans to the stadium. Football games against the Wisconsin Badgers, South Carolina State Bulldogs, SMU Mustangs, and Cincinnati Bearcats are all popular games. Other matches against the Memphis Tigers, BYU Cougars, and other college football teams are a big deal in Tampa.

In addition to NFL games, you can find many concerts and events at the venue year round. Some concerts include Kenney Chesney and Justin Bieber. You can also catch exciting events at the venue including the Outback Bowl,  Bad Boy Mowers Gasparilla Bowl, South Florida Bulls football games, Super Bowls, Supercross, WrestleMania, and Monster Jam,