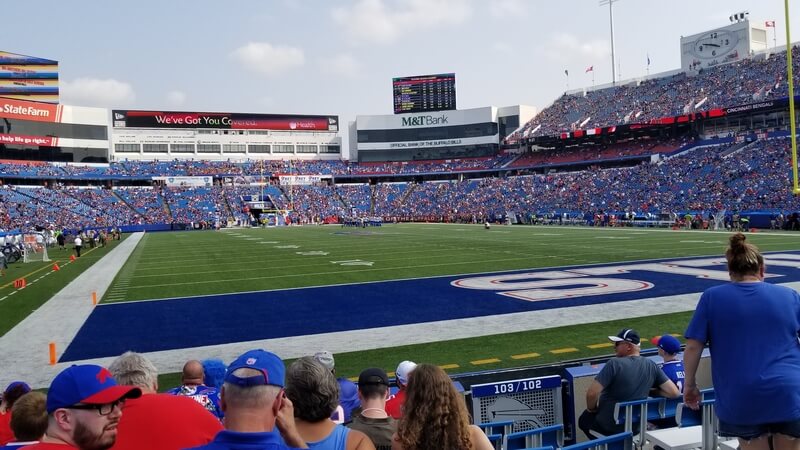 New Era Field (formerly known as Ralph Wilson Stadium) is home to the Buffalo Bills NFL team in Buffalo, New York. The arena out in upstate New York sits out on 1 Bills Drive, Orchard Park, New York 14127 United States. In addition to football games in Buffalo, you can also find hockey games nearby at KeyBank Center. If you are looking for Keybank Center Parking, you can visit that link.

How Much is Buffalo Bills Parking?

If you plan to park in the New Era Field Parking lots, you can expect to pay around $30. Lots 1,3,4,5,7 are open for fans to park on game day to watch their team play. Plan to arrive four hours before home games as parking spaces fill up quickly with tailgaters. Fans looking to bring their campers to the game can you lots 6 and 7.

There are Buffalo Bills handicap parking spaces available in lots 2 and 6 for fans to use when coming to a game. ADA parking on the game day goes for $30 for a parking space. Bills fans will need to show a valid parking pass and state-issue license plate to leave their vehicle in the parking lots. In addition to ADA parking, fans can use Westbound Morehead Street for drop-offs and pick-ups at the venue.

Can you Tailgate at the Stadium Parking Lots?

Bills Mafia brings tailgating to a whole new level in their parking areas and stadium lots at the venue. New Era Field parking lots open four hours before kickoff, so come early to party with Bills fans in the parking lots. In addition to tailgating in the parking lots, fans venture to the local bars near the stadium before or after a game. Some bars include Big Tree Inn, Kettles, The Byrd House, and Applebee’s Grill and Bar.

Catching a Bills game is popular especially when it’s against AFC rivals like the Super Bowl Champions New England Patriots. Regular season matches against the New York Giants, Dallas Cowboys, Miami Dolphins, New York Jets, Baltimore Ravens, and Minnesota Vikings are all popular with Bills Mafia. Other games against the Washington Redskins, Jacksonville Jaguars, Cincinnati Bengals, Philadelphia Eagles, and Denver Broncos draw a lot of fan interest. Finally, you can find less demand games during the preseason if you are looking to save money on tickets.

In addition to football games, the Bills stadium hosts many events year round. One concert that fans in Orchard Park are looking forward to is Billy Joel in 2020.