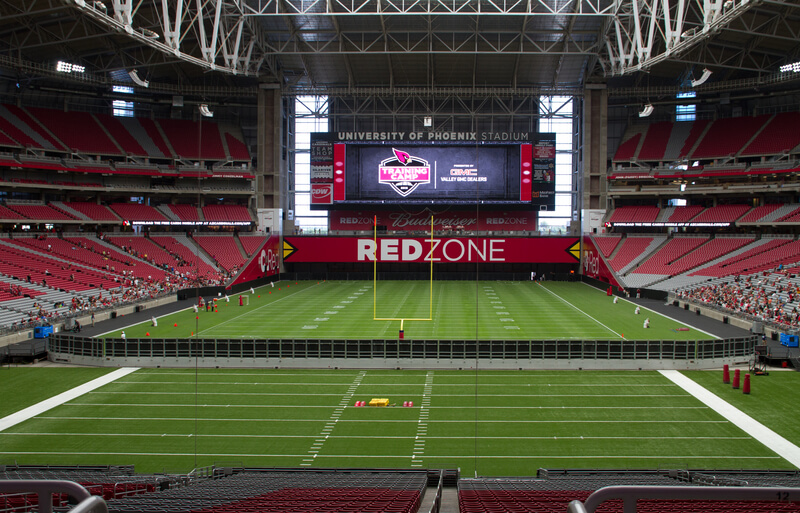 State Farm Stadium is home to the Arizona Cardinals NFL team in Glendale, Arizona. The arena’s address is 1 Cardinals Drive, Glendale AZ 85305. Arizona is also home to professional baseball at Chase Field, basketball at Talking Stick Resort Arena, and hockey at Gila River Arena. If you are looking for Chase Field parking, Phoenix Suns Arena Parking, or Gila River Arena parking, you can visit those links.

How Much is State Farm Stadium Parking?

If you plan to park in the State Farm Stadium parking lots, you can expect to pay around $30. Fans looking to pay in cash can park in the Yellow and Black lots at the stadium. The most popular cash parking option for $10 is the Westgate Entertainment District.

There are 2000 ADA parking spaces available for all events at the stadium’s parking garages. Cardinals fans will need to show a valid parking pass and state-issue license plate in these parking lots. Accessible parking options are at a first-come-first-served basis, so its best to arrive early. Finally, you can direct any ADA parking question to the parking attendants working the parking garages at the arena.

Tailgating takes place at the green lawn area at State Farm Stadium before every football game. Parking lots open four hours before kick-off, so it’s best to arrive early if you want to tailgate. In addition to tailgating in the parking lots, you can also visit the local bars around the stadium before or after a game. Some bars to visit include Whiskey Rose, Fat Tuesday Westgate, and Yard House. In addition to those places, you can also visit Bar Louie, Native Grill and Wings, and The Nest.

Fans typically use Uber and Lyft as a public transportation option to get to the football arena. Fans can use Black lots for the drop-off and pick up areas for their Uber or Lyft rides. Black Lot’s location is South of Cardinals Stadium across Bethany Home Road / Cardinals Way.

The Arizona Cardinals draw many fans into their stadium each year for NFL home games. Games against the Atlanta Falcons, Los Angeles Rams, Seattle Seahawks, and San Francisco 49ers are popular. In addition to those matches, Detroit Lions, Carolina Panthers, Pittsburgh Steelers, Green Bay Packers, Baltimore Ravens, Washington Redskins, and Cleveland Browns draw many fans too. Finally, fans can check out the preseason schedule if they want to score cheap NFL tickets to a Cardinals game.

In addition to Arizona Cardinals games, you will find plenty of concerts and events at this arena year round. Some concerts at the venue include the Rolling Stones, Justin Bier, and Motley Cure and Def Leppard with Poison. Popular event at the arena include hosting Superbowls, college football Fiesta Bowls, Supercross, Monster Jam, and more.

My name is Greg Kristan, and I'm the owner of The Stadium Reviews., LLC My goal is to visit every MLB ballpark and I'm halfway there! Outside of Sports, I run my own SEO consulting agency, TM Blast LLC.