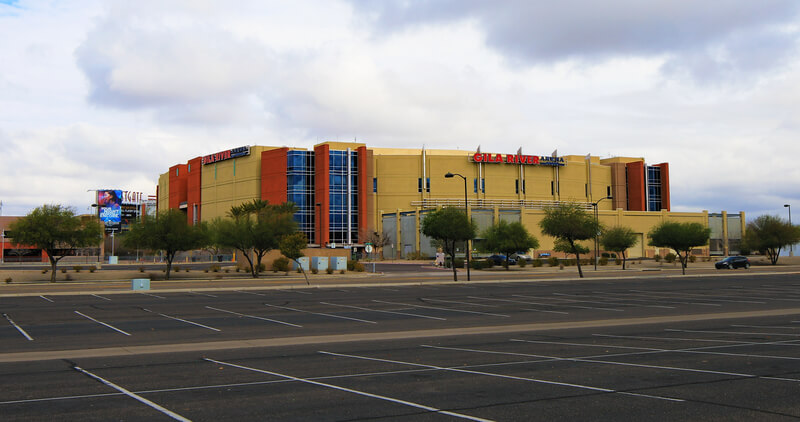 Parking at Gila River Arena for the Arizona Coyotes

Gila River Arenas(previously Glendale Arena and Jobing.com Arena) is home to the NHL Arizona Coyotes team out in Glendale, Arizona. The arena’s address sits at 9400 West Maryland Ave, Glendale, AZ 85305. In addition to hockey games, Gila River Arena is home to many concerts and events. Finally, Arizona is also home to baseball at Chase Field, football at State Farm Stadium, and basketball at Talking Sticks Resorts Arena. If you are looking for Chase Field parking, State Farm Stadium parking, or Phoenix Suns Arena Parking, you can visit those links.

How Much is Gila River Arena Parking?

If you plan to park in the Gila River Arena parking lots, you can expect to pay around $10 for hockey games. Parking is ample at the arena, so fans should not have much problem finding a parking space for a game or event.

Fans looking for handicap parking can head over to Lot G, B, J, and Yellow garages in the arena. Handicap parking comes on a first-come basis, so it’s best to arrive early events. Fans will need to present a valid parking pass and placard to keep their car in the handicap spaces too. In addition to parking, fans can take advantage of the drop-off and pick-up station at the venue. Head over to the Westgate Entertainment District for pick-ups and drop-offs.

There is no tailgating at the venue, but many bars are close to the arena. Fans can check out McFadden’s Glendale, Bar Louie, Whiskey Rose, and Yard House.  In addition to those bars, fans also head over to Fat Tuesday, Bananas Ranas Restaurant, Applebee’s Grill and Bar, and The Nest before and after a game.

Similar to NFL games at the University of Phoenix, it’s best to drive to this venue. A public transportation opportunity is to use Uber, Lyft, or a taxi service to the game. Fans can use the Black lots for the drop-off and pick up areas for their Ubers and Lyfts.

Many events take place in the arena for fans to check out all year round. Some concerts include Post Malone, Celine Dion, Chance the Rapper, Cher, and Blake Shelton. Finally, you can see Sesame Street, Pro Bull Riding (PRB), and arena football games at the venue.

My name is Greg Kristan, and I'm the owner of The Stadium Reviews. My goal is to visit every MLB ballpark and I'm halfway there! Outside of Sports, I run my own SEO + PPC consulting agency, TM Blast LLC.