When did the Great American Ball Park Open?

The Great American Ball Park (reds ballpark) opened up on March 31st, 2003. The new park replaced Cinergy Field, Crosley Field, and Riverfont Stadium. The current name of the park comes from the Great American Insurance Group. As the years have gone by, The Reds have made numerous changes to their ballpark to create a better fan experience, but have kept the seating capacity virtually the same.

Where is The Great American Ball Park Located? 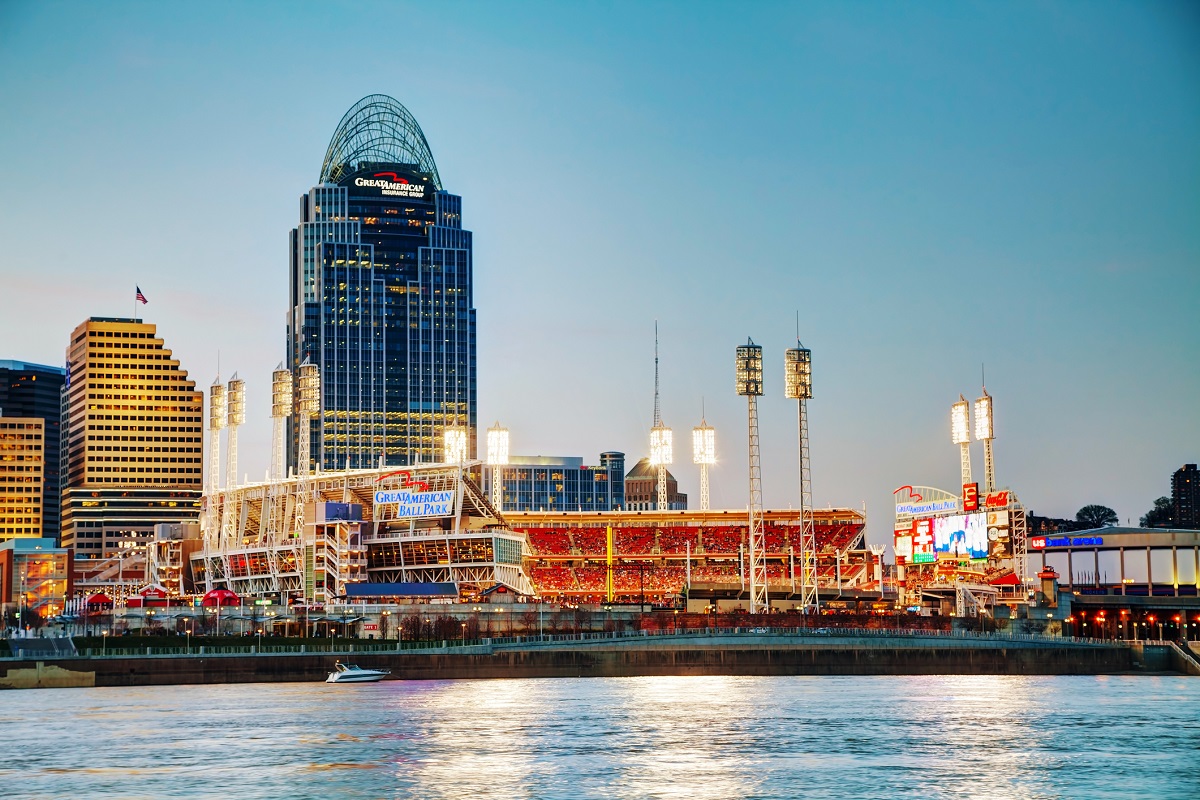 The location of the venue is in Cincinnati Ohio in the United States. The exact address of the park in Hamilton County is 100 Joe Nuxhall Way, Cincinnati OH 45202. The baseball field is only .5 miles away from Paul Brown Stadium which is home to the Cincinnati Bengals who are an NFL team. Check out the Great American Ballpark Parking guide if you plan to drive to the game for baseball. If you are heading to the football stadium, you can check out Paul Brown Stadium Parking for tips on where to park.

The baseball ballpark plays homage to the steamboats that would pass on the Ohio river with two smokestacks out in right center. Fans will be able to see the Ohio River and northern Kentucky when they look out from the upper deck to right field. There are plenty of party areas and club seats at the park along the third base side that offer great views of the Ohio River for fans to see.

When Do the Gates Open at the Great American Ball Park?

The Reds open their gates 90 minutes before the first pitch. Check out the Great American Ball Park Food guide before entering the stadium!

What Team Plays at The Great American Ball Park?

The Great American Ball Park is home to the Cincinnati Reds (Big Red Machine) who are a professional MLB team in the national league central division. In their division, the Reds play the Milwaukee Brewers, Chicago Cubs, St. Louis Cardinals, and the Pittsburgh Pirates.

What are the Dimensions at The Great American Ball Park? 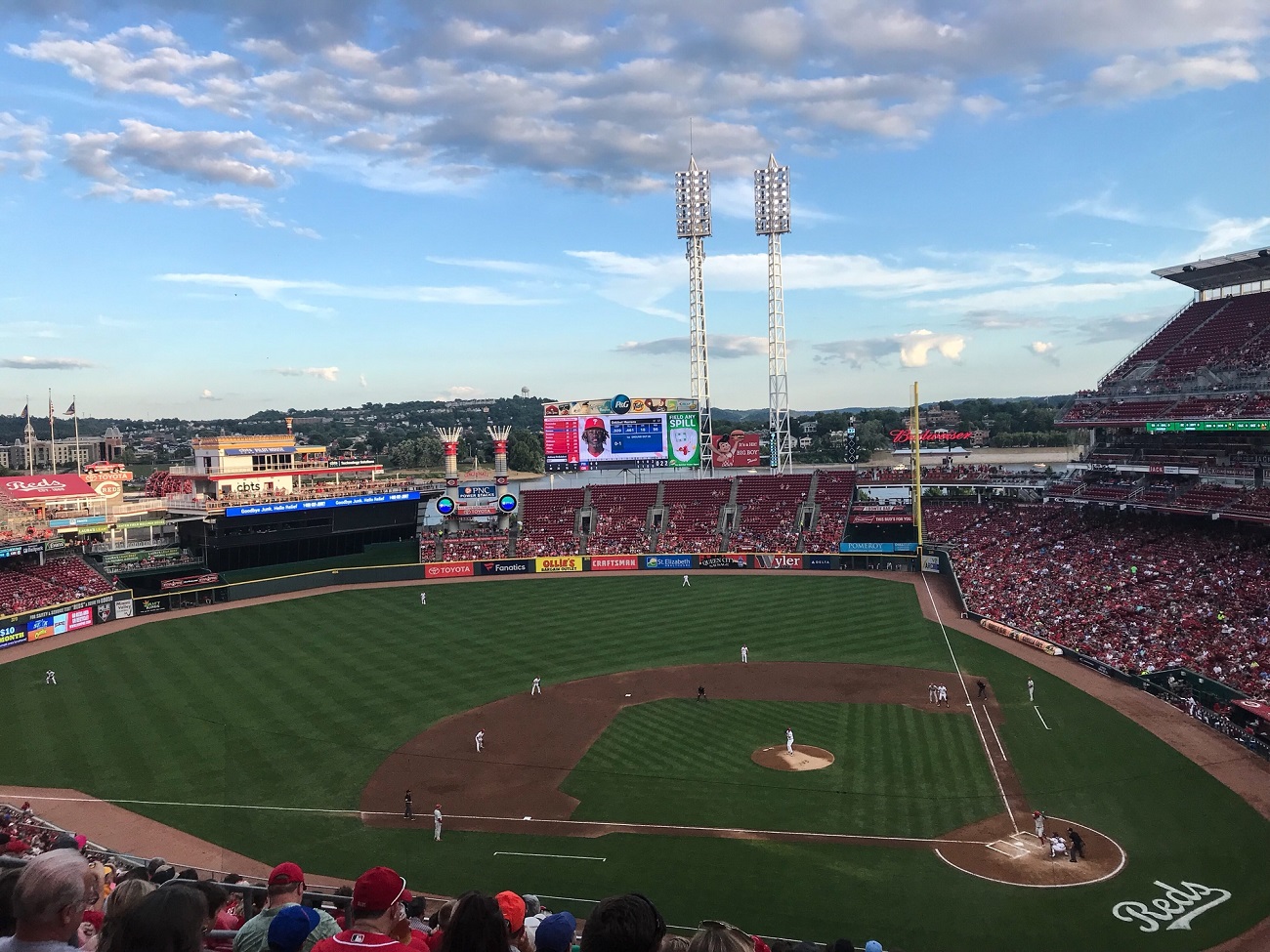 This field is known as a hitter’s ballpark due to the number of home runs it yields per game. From left field to the right, you will see the sizes go from 328 feet, 379, 404 feet in the center field area, 370 feet in the right center, and 325 feet in right field. The distances from home plate make this park one of the easiest places to hit a home run.

What is the Capacity at The Great American Ball Park?

Since opening up in 2003, the Great American Ballpark Capacity has kept the capacity virtually the same. The park (home of the Cincinnati Reds Baseball) can hold 42,319 seats on an average game day. The largest major league baseball crowd attendance at a game came in 2010 during game 3 of the NLDS. The crowd capacity came in at 44,599 people for that game.

The Reds had one of the worst records in 2018, so ticket sales plummeted severely. Tickets will be more tough to find when the Los Angeles Dodgers, San Francisco Giants, New York Mets, Philadelphia Phillies, Colorado Rockies, Arizona Diamondbacks, or Cleveland Indians visit however. Otherwise, you will find it pretty easy to get tickets for a baseball game.

The closest ballparks to arena are out in Chicago.  Travelling west of Cincinnati will arrive at Wrigley Field and Guaranteed Rate Field. Each of these ballparks is homes to the Chicago Cubs and the Chicago White Sox respectively. Fans can also travel north to get to Milwaukee, Cleveland, and Detroit. The ballpark in Milwaukee is American Family Field, Cleveland is Progressive Field, and Detroit is Comerica Park. If you head east of the Cincinnati field, you can get to PNC Park where the Pirates play.

Fans looking out from the bleachers will notice “the gap” that is a 35-foot break between the seats in the upper deck. The gap provides a beautiful view of the downtown Cincinnati city skyline. A pedestrian bridge connects the two sections in the upper deck, so fans can venture out there to take in the sights which is pretty awesome.

With the Ohio River (the banks) behind the right field bleachers, the Reds pay homage to their 19th and 20th-century traditions. There are two smokestacks out in the distance that flash bright lights and shoot off fireworks after a Reds home run. When a Reds pitcher strikes out an opposing batter, you will see flames come out of these stacks.

The Reds Hall of Fame location is on the west side of the park on Main Street. Inside the Reds Hall of Fame, fans will be able to take in the reds history of the Cincinnati baseball and some of their most famous players over the years. A neat feature in 2019 is that this will mark the 150th anniversary, so definitely take this in if you make it out Ohio.