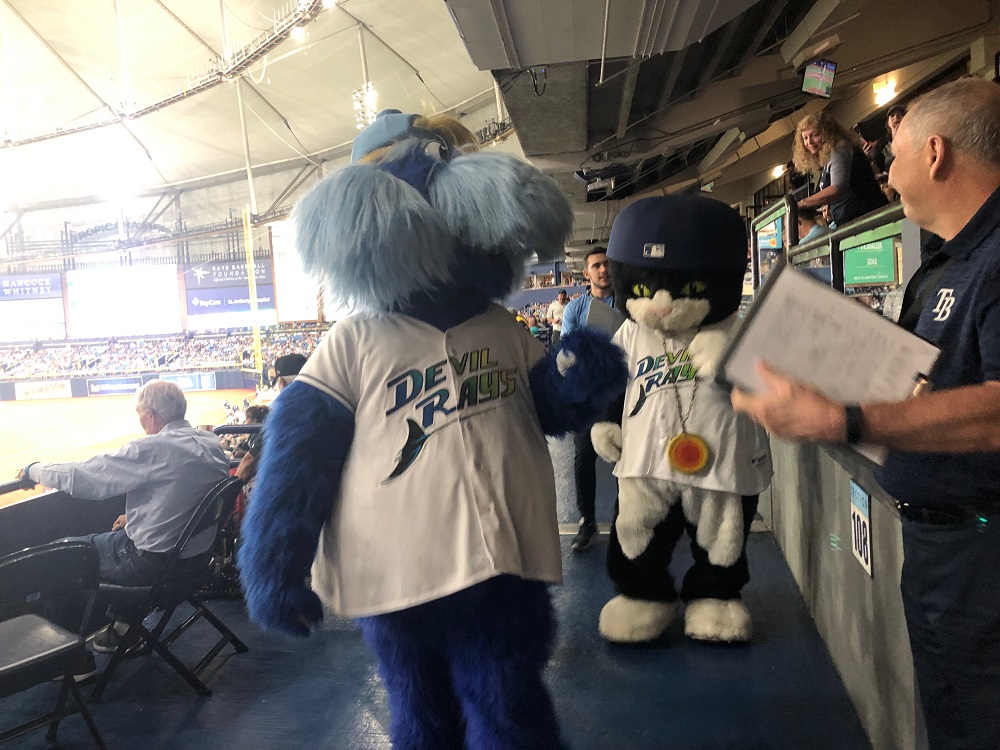 The Tampa Bay Rays are a professional baseball team in the American League East Division. 1998 was the first season of the Rays at Tropicana Field, so there was plenty of buzz and excitement to start the franchise in St. Petersburg. The Rays introduced their mascot, Raymond, to their fans to help bring a more fan-friendly environment to the ballpark. In this post, I will share the complete guide to the Rays mascot, new mascots on the team now, and more!

Legend has it that back in 1998, Tampa Bay Devil Rays scouts were on a fishing trip in the Gulf of Mexico and spotted strange water movement. The creature was particularly drawn to the smell of hotdogs and got along with the scouts where he would dance for them. The Rays asked the blue creature if he would be the official mascot of the team in exchange for endless hot dogs, and the rest was history.

When Did Raymond Make his Rookie Major League Debut?

On June 21, 1998, Raymond made his MLB debut at Tropicana Field in St. Petersburg, Florida. The game was against the Boston Red Sox, so the venue was a sellout with over 40,000 fans. Tampa Bay lost to the Red Sox 3-1, but this exciting new feature was the main highlight for the team.

What is the Tampa Bay Rays Mascot Supposed to Be?

Many people are curious about what animal is the Tampa Bay Rays mascot. Others are curious about what the Tampa Bay Rays mascot is supposed to be since it’s not a devil ray. To answer these questions, the Rays have identified the Major League Baseball Mascot as “Canus Manta Whatthefluffalus.” To put it mildly, you can refer to Raymond as a seadog, as he stands as a tall furry blue creature.

Why is his Name Raymond?

The Rays mascot’s name comes from the team’s name, Rays. Back in 1998, the team was the Devil Rays but became the Rays after the 2007 season. The mascot continues to use the name, Raymond, as a play on words for the team.

Does the Rays Mascot Like the New York Yankees?

The Yankees claim not to have a mascot, even though they did for a short second, but Raymond sees them their team as rivals. Some reasons why Raymond sees the Yankees as rivals include the following three reasons. First, the Yankees have their spring training facility in Tampa, George M Steinbrenner Field, where they are setting up their enemy territory. Second, Florida has many transplant fans from New York, so when the Yankees visit the ballpark, they have a large away crowd cheer them on. Finally, the New York Yankees play in the American League East Division like the Rays, so they are already division rivals.

Does the Rays Mascot Have Any Rivals?

The primary rival of the Rays mascot is Wally the Green Monster. Wally is the Boston Red Sox mascot, so they like to prank each other when the other team visits their ballpark. Raymond enjoys decorating the visiting broadcast booth with his merchandise at times when the Red Sox visit the Tampa Bay Rays. They each claim that they are the best mascot in baseball.

Another rival of the Tampa mascot is the Miami Marlins mascot, Billy the Marlin. The Miami Marlins and Tampa Bay Rays each play in Florida, so they are cross-town rivals naturally. The two teams only play against each other a handful of times each season, but the mascots like to put on a show for the fans.

Are there Any Other Mascots at Tropicana Field? 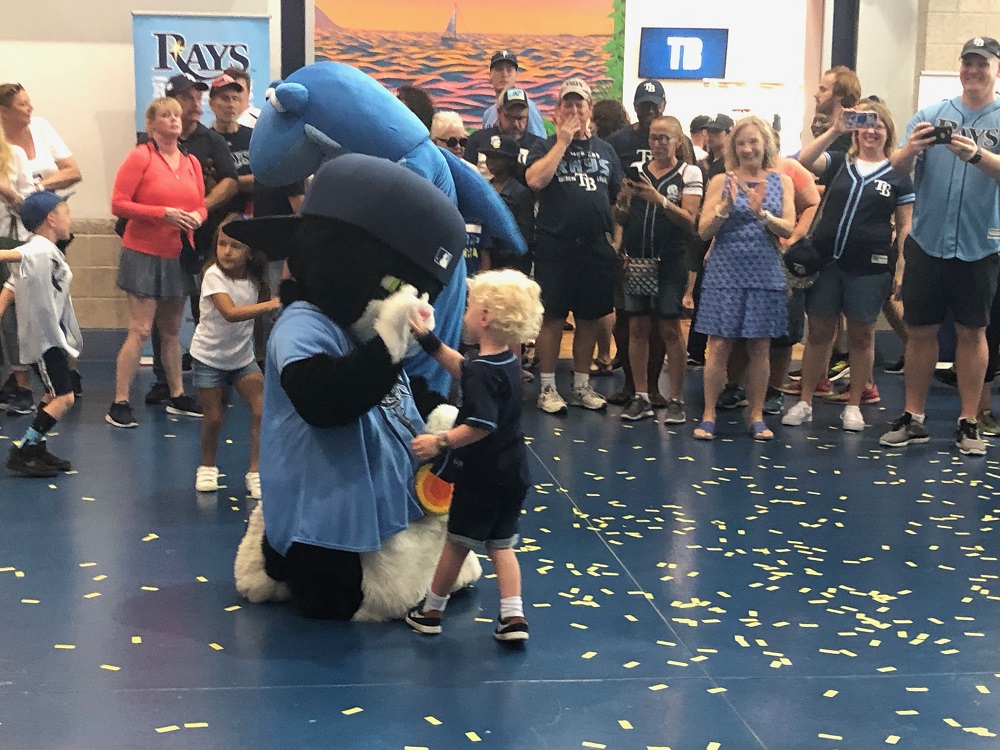 In addition to Raymond, the Tampa Bay Rays also have DJ Kitty (Kitty Tampa) as a secondary mascot. Many people will ask “who is DJ Kitty” since that seems so random for the Rays. DJ Kitty made his MLB debut in 2010 and is the designated disc jokey for the team. DJ Kitty Tampa was found back near dumpsters at the ballpark when he was giving a job with the team in 2010. Legend says that the Kitty cat would sit out near the venue to listen to music.

Finally, you may see another mascot at Sunday baseball games with DJ Kitty and Raymond. That mascot name is Stinger, and he was born somewhere in the Gulf of Mexico. Legend says he ran into Raymond as well in the Gulf of Mexico and got a job at Tropicana Field. Stinger’s responsibilities include giving high fives, hanging out near the rays tank, and rooting on the Rays. This mascot is as an honorable mention when talking about the mascots of the baseball team.

What Do the Mascots Wear?

Raymond likes wearing large Rays jerseys, a backward baseball hat, and a large pair of white sneakers to the ballpark. When the Rays are wearing their blue uniforms, Raymond wears his as well. In addition to his traditional look, you can find Raymond wearing promotion t-shirts at times during giveaways. Along with Raymond, DJ Kitty sports a backward hat, gold chain, and a white Rays jersey.

Raymond turned 16 in 2004, so the Rays held a sweet 16 birthday party for their mascot before a game. In attendance was the Houston Astros mascot, Orbit, Philadelphia Phillies mascot, Phillie Phanatic, NHL mascot, Thunderbird, and more. To celebrate the big day, Raymond threw out the first pitch to the Phillies mascot.

What Do the Tampa Bay Rays Mascots Do at the Ballpark? 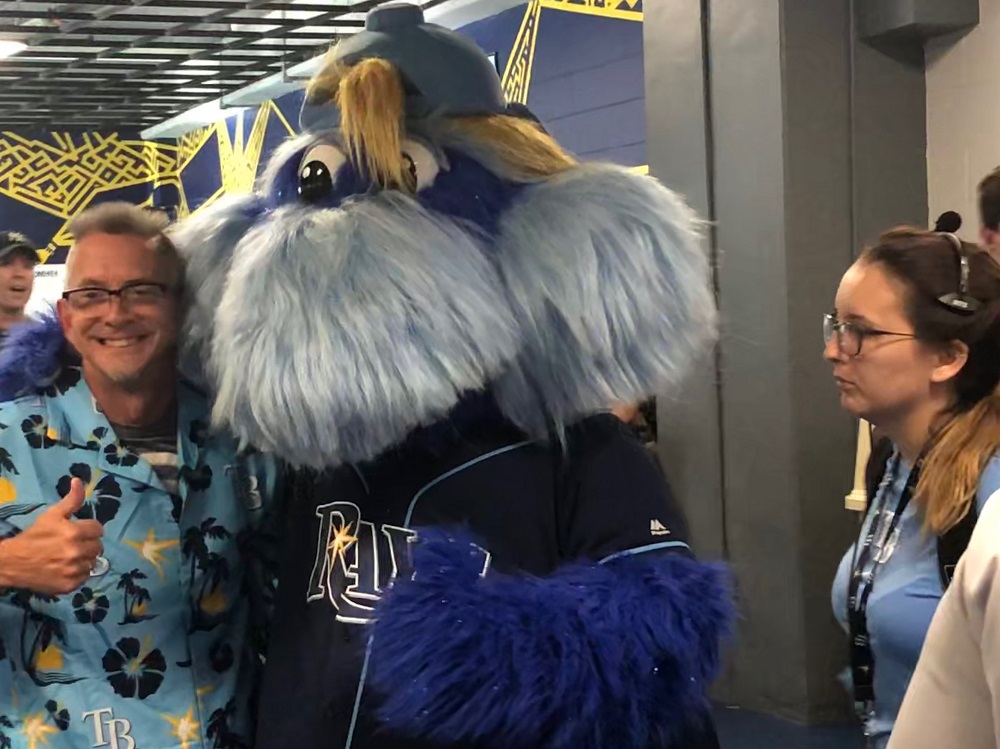 Raymond, DJ Kitty, and Stinger all enjoy interacting with fans, taunting opposing mascots, and cheering on the Rays. Most notably, Raymond enjoys dancing with fans, DJ Kitty likes to call for rallies on the big screen, and Stinger hangs out at the Rays tank with fans. In addition to cheering and dancing, the mascots also enjoy pranks on other mascots, visiting birthday parties at the ballpark, and hanging out in the TV booth at the venue.

Back in 2008, Raymond, the mascot, was played by Kelly Frank for the Rays. Kelly was a fan favorite as she had killer dance moves as the mascot, but she was let go. The story goes that Kelly did not get a reason for her firing, but the story for her is only the start. After leaving the Rays organization during their World Series season, Kelly worked as the mascot for the Tampa Bay Lightning hockey team as their mascot. During an NHL game against the Boston Bruins, Kelly Frank shot silly string in the face of a bruins fan.

During the 2013 season, the Rays mascot got in hot water by holding up an inappropriate sign. During a Baltimore Orioles match at Tropicana Field, the Rays mascot held up a sign making fun of the death of Steve Irwin. Steve Irwin, the crocodile hunter, died when a stingray struck him in his heart. The joke was supposed to show how the Rays took care of the crocodile hunter, but it did not sit well with fans or media.

The investigation later found that a fan-made sign and that the mascot held up the sign for a photo. After taking that photo, social media and other websites quickly grew with outrage, which had the team issue an apology. The Rays made a public apology to the community and fans after the incident.

Many MLB teams have one mascot, but the Rays are impressive since they have three. Raymond, DJ Kitty, and Stinger all enjoy interreacting with fans and rooting on the rays for each home game. You can see DJ Kitty and Raymond participating in dance-offs with fans if you arrive early to the ballpark. You can find the mascot at All-Star games with other MLB mascots too.

If you plan to visit the ballpark., check out the Tropicana Field parking tips section. With that parking section, you will find places to park, how to save money, and more.