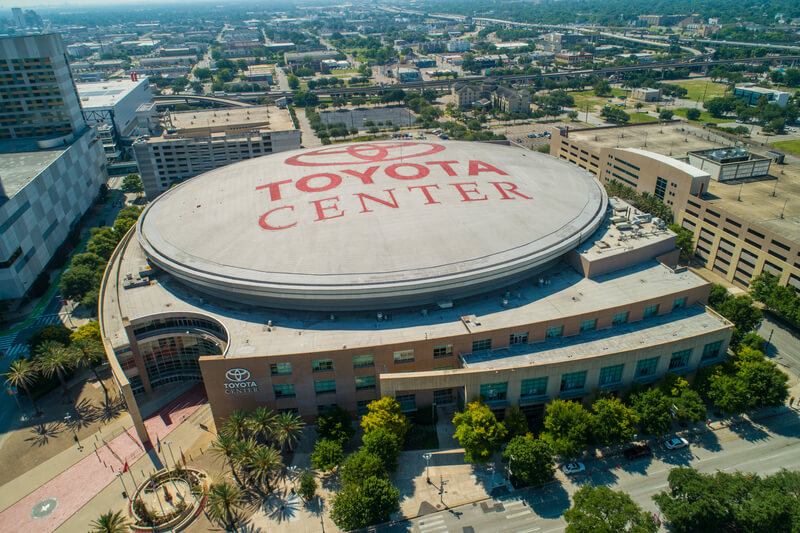 Toyota Center is home to the NBA Houston Rockets team. The arena’s address is at 1510 Polk Street Houston, Texas 77002. In addition to basketball games, you will find plenty of concerts and events at the arena year round. Finally, Houston is also home to professional baseball at Minute Maid Park and football at NRG stadium. If you are looking for Minute Maid Park parking, or NRG Stadium parking, you can visit those links.

How Much is Toyota Center Parking?

If you plan to park in the Toyota Center parking lots, you can expect to pay $25. Depending on how far you are willing to walk to the venue, you can find great Houston Rockets parking deals. Fan can us SpotHero above to find cheap parking near Toyota Center before their next visit.

There are ADA parking spots for fans to use at Toyota Center at the Toyota Tundra parking garage. Accessible parking is also available at private surface lots on Clay St. Finally, ADA parking spots fill up quickly, so use SpotHero above to reserve a space before driving to the arena.

There is no official tailgating in the parking lots at Toyota Center, but there are plenty of bars nearby to visit. Some bars include Lobby Bar, 1600 Bar and Grille, and Jet Lounge. In addition to those bars, fans also visit Reserve 101, Pete’s Dueling Piano Bar, and Tejas Grill & Sports Bar before and after a game.

There are plenty of public transportation ways to get to the basketball arena in Houston. The Metropolitan Transit Authority of Harris County has multiple lines running to and from the venue. In addition to the bus, fans can use Uber or Lyft to get to and from the site. The official pickup and drop off area at Toyota Center is on Bell Street.

In addition to basketball games, you will find plenty of concerts and events at the venue year round to enjoy. Some concerts include Post Malone, Mana, Celine Dion, Chance the Rapper, Andrea Bocelli, Cher, Elton John, and Harry Styles. Other concerts include Quick Brown Fox Jumps over the Lazy Dog, 5 Seconds of Summer, Lauren Daigle, Trans-Siberian Orchestra, Black Keys, the Chainsmokers, Bad Bunny, and Luke Combs. Finally, you can catch additional events like Elevation Worship, Joe Rogan, UFC matches, WWE matches, and NCAA Tournament South Regional matches at the arena.