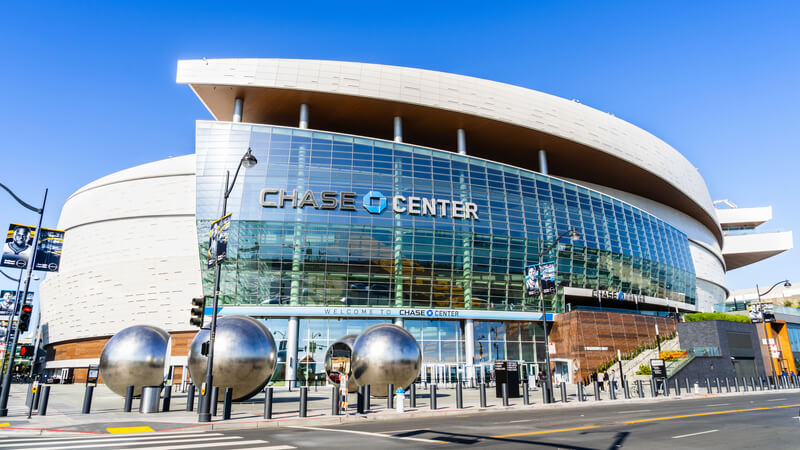 Chase Center is the new home of the Golden State Warriors NBA team in San Francisco, LA. Previously, Golden State played NBA games out in Oakland at Oracle Arena, so this is the first year at their new venue across the bay. The arena (out in the Mission bay area) sits out one 1 Warriors Way and is about one mile away from Oracle Park, where the San Francisco Giants MLB plays. If you are looking for Oracle Park parking, you can check out that resource.

In addition to basketball games, Chase Center also hosts many non-sports events year round. Become familiar with the Golden State Warriors parking situation at the venue before your next visit now!

How Much is Chase Center Parking?

If you plan to park in the Chase Center parking lots, you can expect to pay around $40.With only 900 official parking spaces at the venue, you should use SpotHero above to reserve parking before going to the venue. Warriors parking can be difficult due to the construction going on around the stadium, so book parking early!

There are ADA parking spots for fans to use at the parking lots around the stadium, but plan to arrive early to claim these spots. Fans should use SpotHero above to reserve ADA parking spaces as parking fills up very quickly for a Warriors game. In addition to reserving parking, fans should also remember to show a valid State ID and parking pass to leave their cars in these ADA spaces.

There is no tailgating at the arena, but there are plenty of bars near the venue to visit. Some fan-favorite bars include Yield Wine Bar, Cockscomb, Hogwash, and Topsy’s Fun House. Warriors fans also enjoy going to the Third Rail, Zita Wine Bar, and the Fly Trap before and after a game.

There are plenty of ways to use public transportation to get to Chase Center. Fans can take the Muni Bus, Caltrain, and the San Francisco Municipal Transportation Agency (SFMTA) to get to and from the venue. Muni officials are expanding the T-Third platform at the UCSF/Chase Center stop to anticipate large crowds on game days. Muni also provides two express bus shuttles from the downtown to the arena for games and events too.

While a bit of a walk, fans can consider taking the BART or ferry to the game. The nearest BART station stop is one and a half miles away from the arena at Powell Street. Taking the BART is the best option if you are coming from Silicon Valley, up the Peninsula, or East Bay. A ferry service will be available for fans to use to get to the arena for events as well. Currently, fans can take a $14 ferry across the bay to get to San Francisco Giants baseball games, so this will be an option for Warriors games too.

Many significant events take place at Chase Center for fans to enjoy all year round. Some events include Metallica, the San Francisco Symphony, Lazy Dog, Quick Brown Fox Jumps, Ariana Grande, and more.