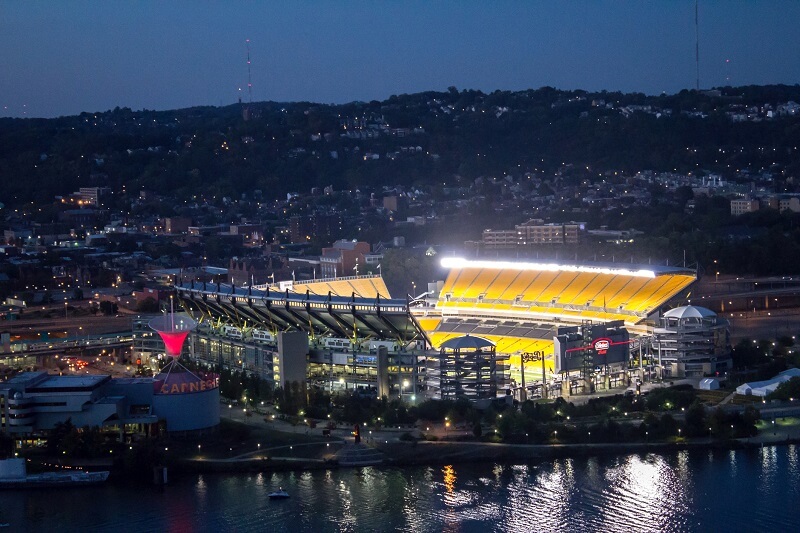 Parking Near Heinz Field for the Pittsburgh Steelers

Heinz Field is the home of the Pittsburgh Steelers NFL team and the Pittsburgh Panthers football team. The venue sits out on 100 Art Rooney Ave, Pittsburgh, PA 15212 on the north shore of downtown Pittsburgh. PNC Park (where the Pittsburgh Pirates play baseball) is a short walk to the venue as they both sit alongside the Ohio and Allegheny River. In addition to baseball games, PPG Paints Arena sits close by and is home to Pittsburgh’s hockey team. If you are looking for PNC Park Parking or PPG Paints Arena Parking, you can visit those links.

How Much is Pittsburgh Steelers Stadium Parking?

If you plan to park in the Heinz Field parking lots, you can expect rates to go for $20 or more. Parking options and rates will vary depending on far away you park at the venue. Standard parking rates at the NOVA Place Garage go for $20 while the Red Lots go for $60. Parking near Heinz Field can find parking deals as low as $10 in places, so use SpotHero to discover great deals!

There are handicap parking spaces for fans to use when parking at the venue. Fans will need to show a valid parking pass and state-issued license plate to leave their vehicle in these parking spaces. Please note that all accessible Steelers parking spaces come at a first-come and first-served basis, so plan to arrive early.

Is there Heinz Field Parking Tailgating?

Tailgating opens up five hours before kick-off on the north shore parking lots at the venue. Tailgating is part of the fan experience in football, so fans arrive early and set up shop with their terrible towels and grills. Fans can’t have open flames in any of the parking spaces for tailgating though.

Check out the Heinz Field Food guide before entering the stadium to know what to get!

Fans looking to take public transportation on game day can search for the Port Authority Regular Bus Service. Many suburban and downtown routes will drop Steelers fans off at the venue at the nearby bus stops. There are also downtown shuttle services that bring fans to the site on game day. The Gateway Clipper shuttle brings fans across the river from Station Square to Heinz Field as well.

Popular football matches include The New England Patriots, Seattle Seahawks, Cincinnati Bengals, Baltimore Ravens, and Cleveland Browns all bring many visiting fans to the arena. Other teams like the Buffalo Bills, Los Angeles Rams, Tampa Bay Buccaneers, Indianapolis Colts, Kansas City Chiefs, and Miami Dolphins all bring in many fans to the games too. In addition to those games, fans should consider checking out preseason games if they want less ticket demand. Games against the Chicago Bears, Minnesota Vikings, Tennessee Titans, and New York Jets generally have less demand for tickets.

For the University of Pittsburgh Panthers football team, you can expect some teams to bring big crowds to the venue for each game. Games against the North Carolina Tar Heels, Virginia Cavaliers, and Ohio Bobcats all will have plenty of fans in the venue. College Football games take place on Saturday’s, so there is no issue between college and NFL games.