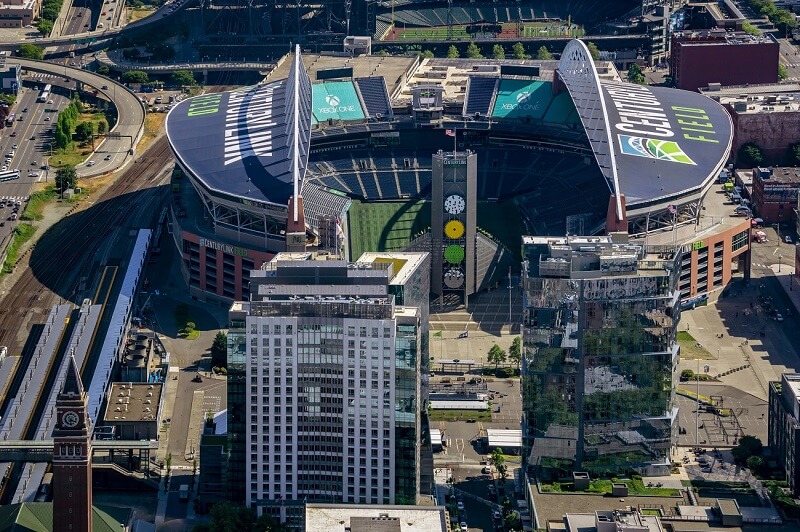 How Much is CenturyLink Field Parking?

If you plan to park in the CentyryLink Field parking lots, you can expect to pay between $20-$40. The North Lot parking spaces goes for $20-40 on the game day depending on what team is playing the Seahawks. The CenturyLink garage hovers around $20 for parking but also depends on demand and opponent. Game day spaces are typically restricted to season ticket holders who have pre purchased parking with their seats.

If you would like to save money on parking, you can park further away from the stadium. Fans heading out to the Bank of America Lot can expect to pay $10 for a parking space. The Millennium Tower Garage also has great parking deal rates, but is about a fifteen minute walk to the venue.

There is handicap and accessible parking for Centurylink field football and soccer games for fans to use at the venue. Handicap parking comes on a first-come, first-served basis, so it’s best to get to the venue early. to claim a spot. Seattle fans can use the North Lot and CenturyLink Field Event Center garage for accessible parking for game day. Finally, fans will need to present a valid parking pass and placard to leave their vehicles in these ADA spaces.

Is there Tailgating at Seattle Seahawks Parking Lots?

Tailgating is part of the experience for Seahawks game, but it’s only in the North Parking Lot for specific days. Fans can tailgate in front of their vehicle, but must end fifteen minutes after the game begins. Finally, fans can yse propane grills to cook food, but can’t have any open flames in the parking lots.

Fans can use the light rail service to get to and from the venue without paying for parking. The light rail service has a few stops along the way at Carson, Stonewall, and the Convention Center from the suburbs. Fans coming up from Portland can use the Amtrak Cascades Services which has a station next to the venue and is just a short walk for fans to take. Finally, fans can also use Uber and Lyft to get to and from the football arena.

Catching a home game at Seahawks stadium is popular for NFL fans due to the loudness of the Seahawks fans. Learn why CenturyLink Field is so loud and what the 12th man stands for too. Games against the San Francisco 49ers, Arizona Cardinals,  Minnesota Vikings, and Pittsburgh Steelers all draw large crowds. Other games against the Los Angeles Rams, New Orleans Saints, and Denver Broncos also draw many fans too. Finally, games against the Chicago Bears, Baltimore Ravens, Cincinnati Bengals, Carolina Panthers, and Tampa Bay Buccaneers generally have less fan interest.

Outside of NFL games, you can expect a large attendance for soccer games. When the New York Red Bulls come and visit, you can expect parking to be difficult. Same goes with when the Minnesota United FC, FC Dallas, or the LA Galaxy visit. Outside of sports game, you can find plenty of concerts at the venue as well. Some concerts include Kenny Chesney, Quick Brown Fox Jumps, and Lazy Dog. Other events at the venue include Monster Jam, SuperCross, and more!