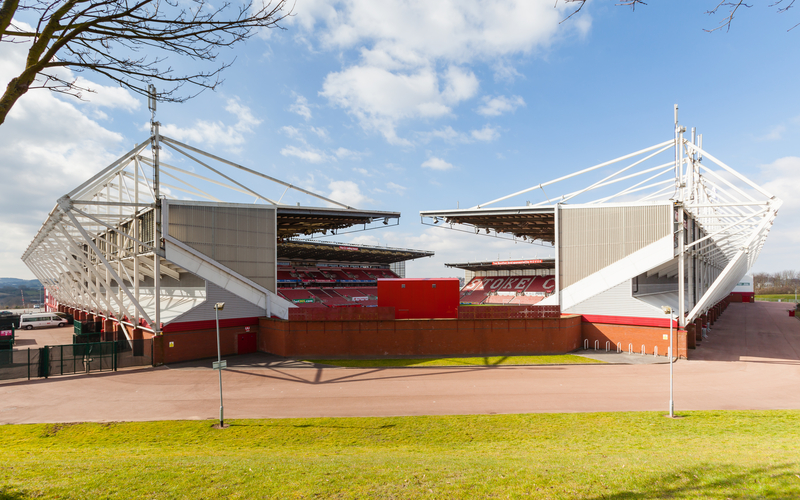 Bet365 Stadium (originally The Britannia Stadium) is home to Stoke City Football Club. The venue opened in 1997 at Stanley Matthews Way, Stoke-on-Trent ST4 4EG, United Kingdom. Before 1997, the team played at Victoria Ground. Outside of hosting soccer match day events, the arena hosts conferences and concerts year-round for fans to enjoy in the area.

How Much is Parking for Stoke City F.C.?

The official Car Park areas at Stoke City FC stadium open at 11:00 AM for an afternoon match and 4:00 PM for a night game. These spaces tend to fill up quickly for games, so plan to arrive early to claim one of these spots. The South Car Park area costs £5 and sits directly next to the venue at ST4 4EG. Additionally, the Power League Complex sits .2 miles away from the stadium, and payment is due upon entering this area. Finally, the Longton Rugby Club, which sits one mile from the venue, is for away fans to use when driving to the arena.

Fans looking for unofficial parking spaces and street parking near Bet365 Stadium should use Your Parking Space to reserve a spot before kickoff. Unofficial parking spot rates tend to hover around £10.00. However, availability for these spots comes on a first-come and first-served basis, so it is best to secure your parking spot weeks ahead of a home game.

Finally, on non-matchday events, fans can park across from the Franklyn Stand lot.

Are There Pre-Match Festivities/ Pubs around Britannia Stadium?

North of the stadium has numerous pubs and restaurants for fans to meet up with each other before a Stoke City FC game. Those places include Harvester Pub, Trentham Lakes Stoke, The Gardeners Retreat, Sutherland Arms, and the Wellington Inn. Most of these places and similar pubs are less than two miles away from the stadium, so it is about a 30-minute walk.

Can You Smoke Inside Bet365 Stadium?

No smoking is allowed at The Britannia Stadium for any game or event.

Should I Take Public Transport to Bet365 Stadium?

Fans taking the train to the game can use the Stoke-on-Trent Railway Station. This train station serves fans in London, Birmingham, Debry and Crewe, and Manchester, making it easy to get to. From there, fans can use a taxi/rideshare program to get to the game or make the 40-minute walk (just under two miles) from the station. Finally, a shuttle bus service to the arena takes off from Glebe Street at Stoke town centre, a short distance from the train station.

Fans looking to take the bus to the game can use the number 20. The number 20 bus line brings fans from Stoke-on-Trent City Centre Bus Station (Hanley) to the arena.

Finally, fans who live in the area can ride their bicycle to the arena. Fans must bring their own bike lock to secure their bike at the stadium properly. 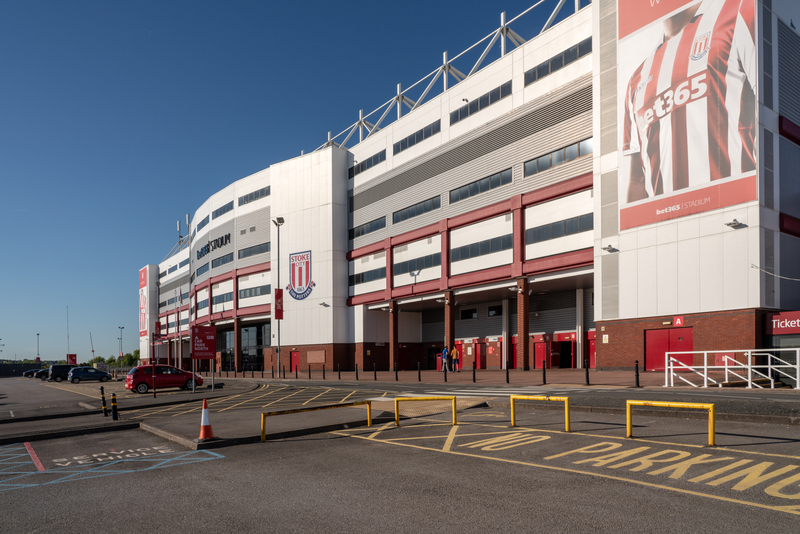 The Potteries Derby means a lot to the fans of Stoke City. The matchup between them and Port Vale has been going on since 1882, meaning lots of history. When these two teams square against each other, you can expect this matchup to be intense with fans.

Outside the Potteries Derby, West Bromwich Albion and Wolverhampton Wanderers are the club’s biggest Midland rivals. Outside of those two teams, any English Premier League game when Stoke City makes it to that league will always draw many home and away supporters to the venue.

How Big is the Max Seating Capacity at the Football Stadium?

The max seating capacity for an association football match at Bet365 Stadium is 30,089.