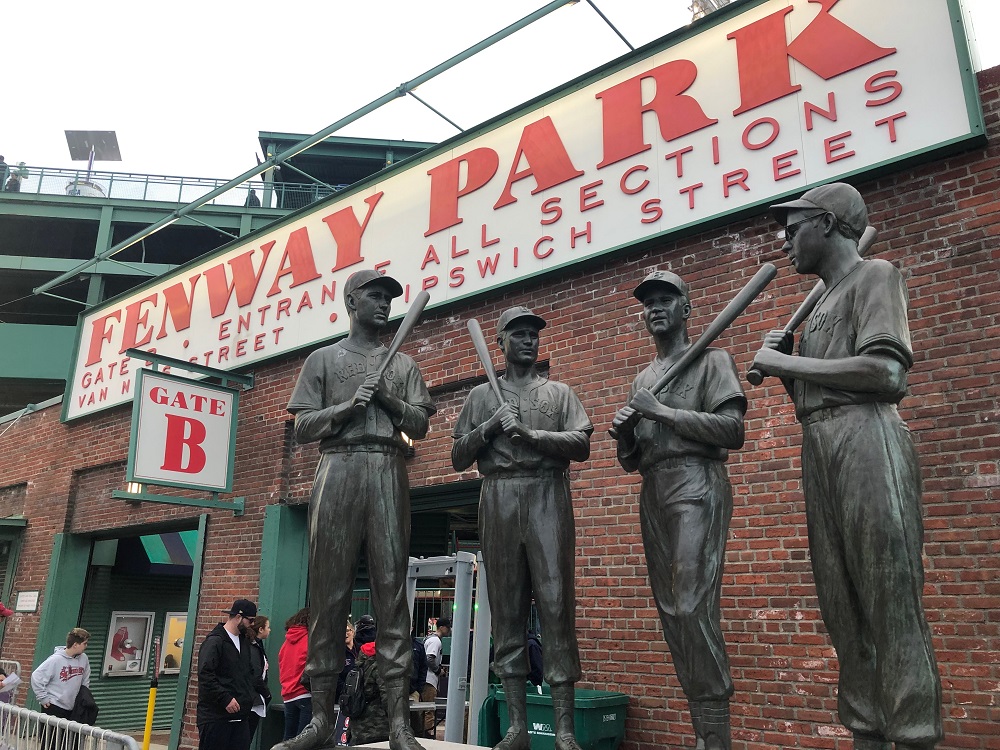 Fenway Park is the oldest baseball stadium in the MLB as of 2020. The Major League ballpark is known for the Green Monster out in the left-field, Pesky Pole in right field, the one red seat, manual scoreboard, quirky outfield dimensions, and more. You may be wondering why it is called Fenway Park to start with, though? The answer to that question is below.

How Did Fenway Park Get Its Name?

Fenway Park (home of the Boston Red Sox) lives out in Boston, Massachusetts, but it’s in a specific section of the city. Around Boston, you have neighborhoods that make up the city like Brighton, Brookline, Allston, South End, Fenway, and more. In the late nineteenth century, Fenway (The Fens) had it’s marshland’s filled to make permanent land which became home to the ballpark. The name came to be from the Red Sox owner, John I. Taylor, who owned the Fenway Realty Company. To help promote the business of John I Taylor, he choose the name “Fenway” to represent the area of Boston and his business.

James McLaughlin was the architect who designed Fenway Park. Charles Logue Building Company did the construction of the ballpark.

What is the Address of America’s Most Beloved Ballpark?

The original address of the ballpark was 24 Jersey Street up until 1977. In 1977, a small section of Jersey Street was named Yawkey Way to honor Tom Yawkey. Tom Yawkey was the owner of the American League team for 44 years from 1933 to 1980. The new address became 4 Yawkey Way up until 2018. In 2018, the street’s name went back to 4 Jersey Street.

First Game at the New Ballpark

The first game at the new Major League Baseball venue came against the New York Highlanders (New York Yankees) on April 20, 1912. The mayor, John F. Fitzgerald, threw out the first pitch to bring in the new venue. The score had Boston defeating New York by 7-6 in eleven innings. The sinking of the Titanic overshadowed highlights of the event of the new site. 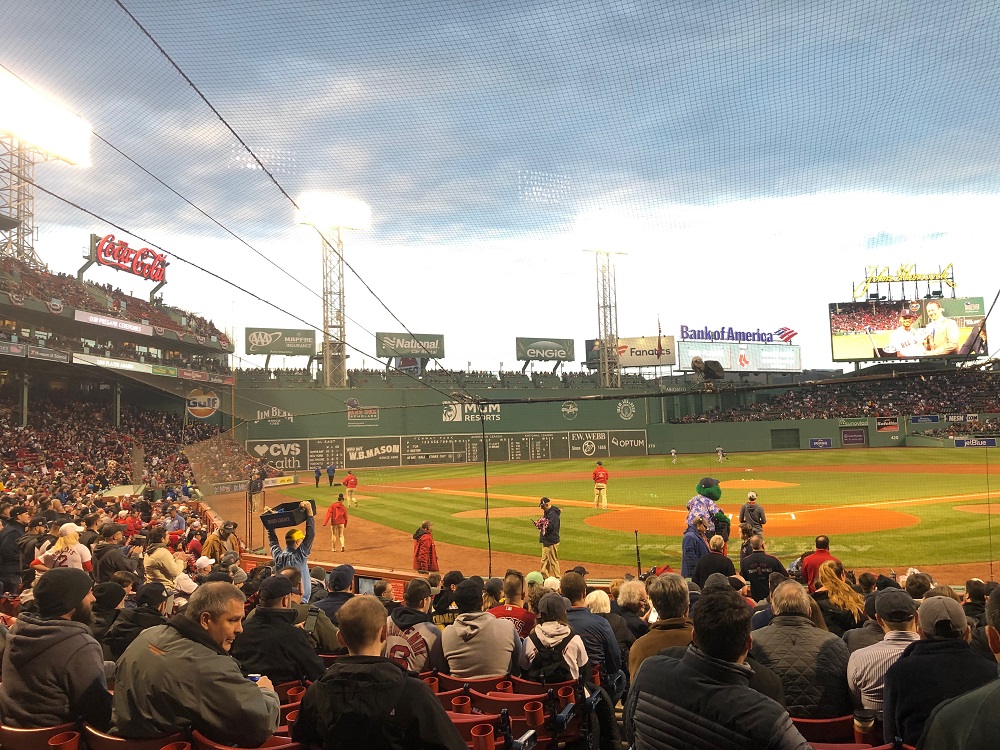 Before the green monster, you had Duffy’s Hill out in left field creating havoc. Duffy’s hill was a small hill out in left field before the Green Monster was a thing. Duffy’s hill was ten feet in hieght and made playing the left field outfield difficult for players. In 1934, the Green Monster was built standing at 37 feet out in the left field.  The distance from home plate to the foul pole sits at 310 feet. Initially, you only had ads on the high wall, but that changed with the green coloring in 1947. Carlton Fisk made the left-field foul pole famous with his home run in game 6 of the 1975 World Series. The left-field wall today remains the most iconic part of the ballpark.

Williamsburg represents the bullpen’s wall out in the right field at the venue. The bullpen was built in 1940 to bring the outfield walls closer for Ted Williams to hit more home runs at the stadium.  A right-field close to the hitter was similar to the short porch distance of Yankee Stadium and Babe Ruth. The Triangle is the area out in the right-center field bleachers where the outfield walls form a triangle. The triangle sits out at 420 feet from home plate.

Finally, we come to the Pesky Pole out in Right Field. Pesky’s Pole sits only 302 feet away from home plate at the ballpark. The naming of the pole came from the Red Sox player, Johnny Pesky. Jonny Pesky did not have many home runs in his career, but when he did, he hit them around the pole. 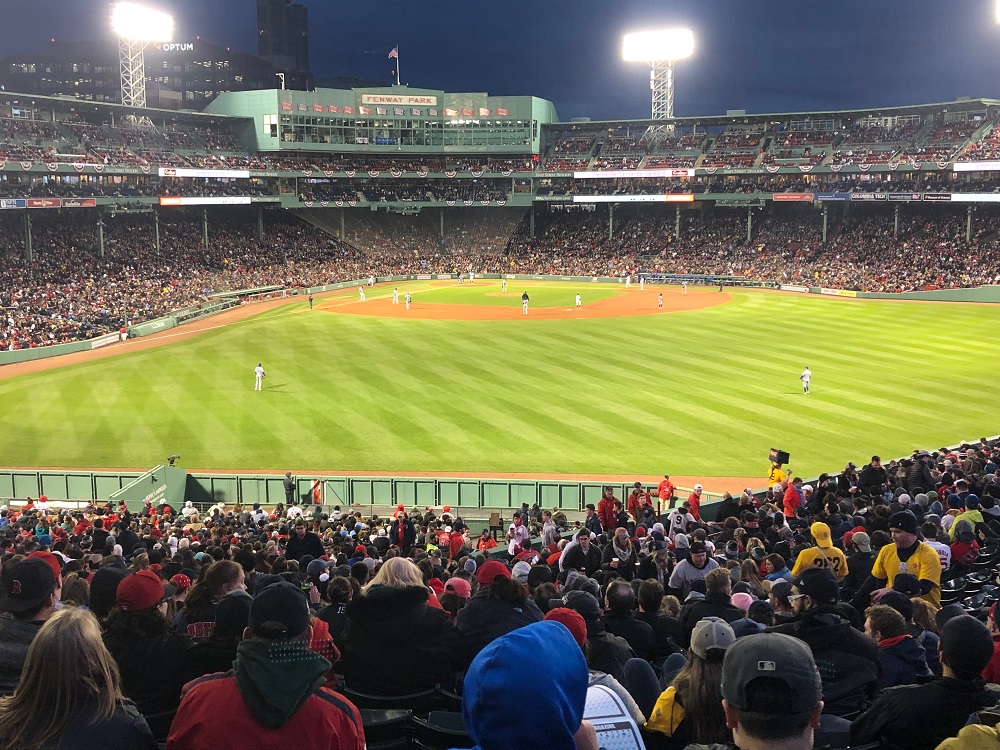 The one red seat out in the right-field bleachers marks the longest home run ever hit at Fenway. Ted Williams hit that home run off Fred Hutchinson from the Detroit Tigers on June 9, 1946. The measurement of the hit was 502 feet, but there is some controversy on if the ball would have been further.

Day games have a seating capacity of 37, 305, while night games have 37,755. The increase in size is when the Red Sox open the center field bleacher seats to fans. Night games make it easier for hitters to see the ball, so they allow fans to sit in that section. Finally, you have something known as “The Belly” at the venue. The Belly represents the curve of the railing from Williamsburg to the field corner of the box seats. 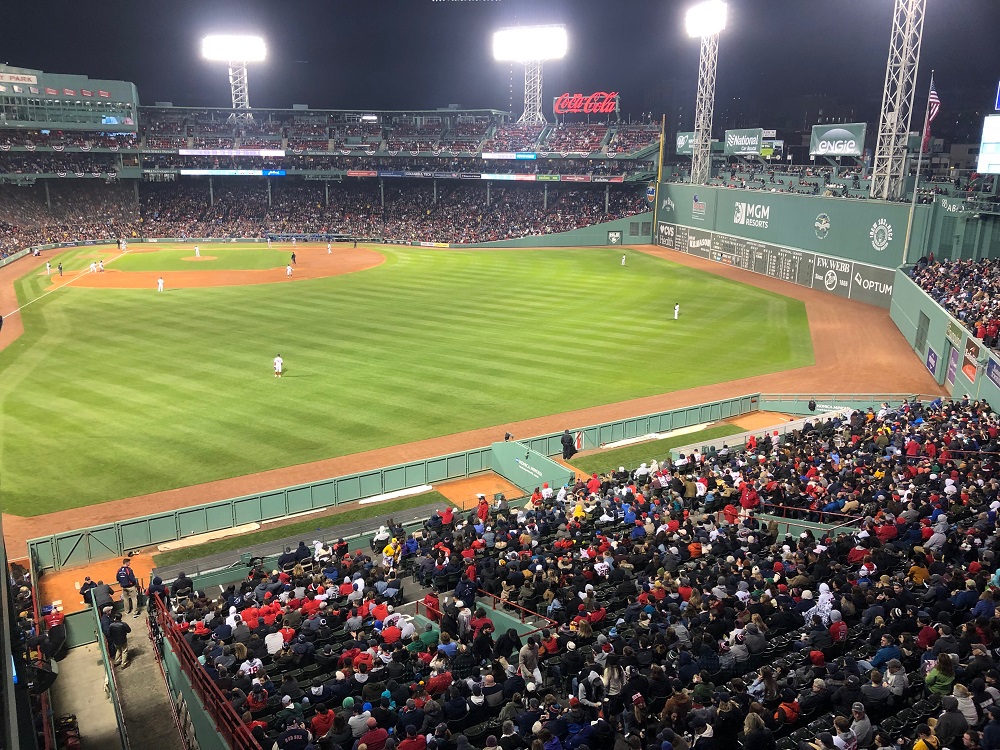 How to Get to Fenway Park?

?Red Sox fans looking to catch a game at Fenway can take the Green Line (MBTA) to Kenmore station. Fans taking the Framingham / Worcester commuter rail can get off at Lansdowne station. Both train stops sit next to the venue, so it’s a short walk. In addition to taking the train, fans can check out the Fenway Park parking tips section to score great rates and secure a parking spot.

Fenway Park and the Boston Red Sox have a storied career and franchise any MLB fan will enjoy. Many famous players played on the Red Sox at Fenway, including Babe Ruth, Ted Williams, Carlton Fisk, and more. The All-Star game in 1999 is still known as one of the best in MLB history. The Home Run Debry with Mark McGuire hit so many home runs onto Lansdowne street that it became a classic for years to come. Finally, there have been plenty of upgrades to the stadium, but the core look still remains the same,