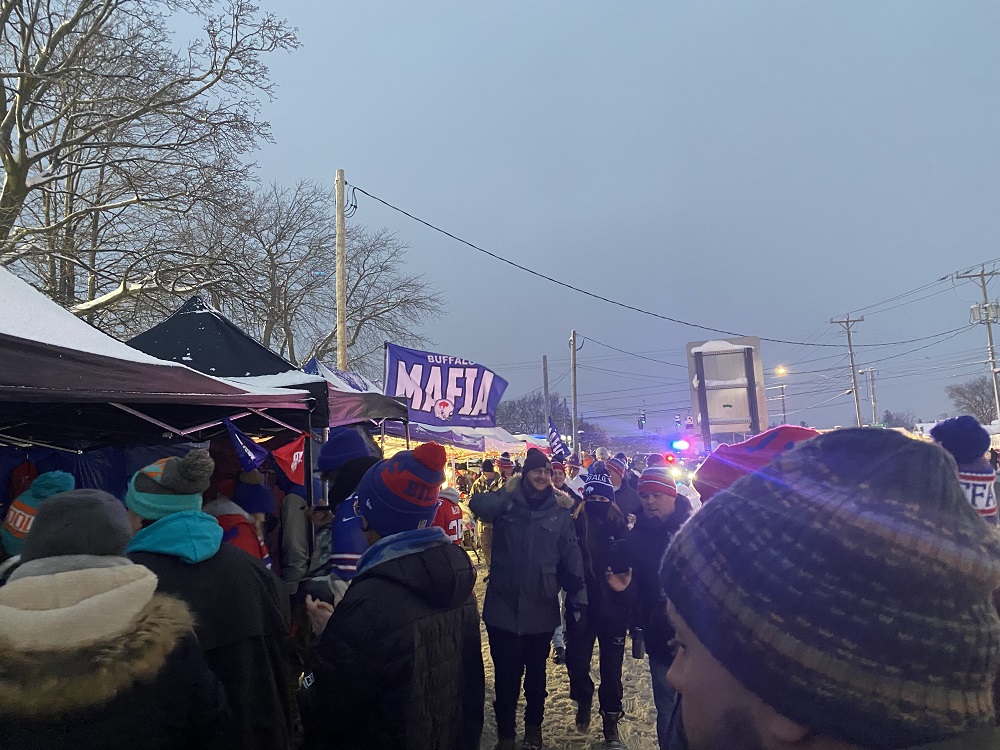 Bills Mafia is difficult to nail down. What started as a tweet is now a worldwide movement of Buffalo Bills fans. It’s as much a social media hashtag as it is an identity. It involves traditions, beliefs, community, philanthropy, branding, and more.

The best way to describe Bills Mafia is as a movement. It is a collection of fans, players, and even other NFL professionals that contribute to and define a unique microcosm of football fandom. It’s a movement with humble and silly origins and has had a tremendous impact on the world.

Here is the complete breakdown of Bills Mafia.

Where Do the Buffalo Bills Play?

This team from upstate New York has one of the most loyal fanbases in the NFL. And despite playoff game droughts or Super Bowl losses, these fans have a near-rabid devotion to their team. So much so that they have a name for themselves: Bills Mafia.

The story of the Bills Mafia is a prime example of how the internet can shape and transform a culture. And its humble origins begin with a single tweet.

In November 2010, Buffalo Bills wide receiver Stevie Johnson dropped a critical pass in a game against the Pittsburgh Steelers. He knew as much, and after the game took to Twitter to vent his frustration. In his now infamous “God” tweet, Johnson lamented that his deity had not been on his side.

Johnson’s tweet caught the attention of the news media, who took the story and ran with it the next day. Later that evening–after Johnson’s tweet had already been analyzed thoroughly by the media–ESPN sports analyst Adam Schefter retweeted it. This ruffled the feathers of some Buffalo fans, who found it funny and in poor taste that Schefter would dredge up the now-day-old tweet after it had already been played out.

According to BuffaloFAMBase–the original site for the Bills Mafia–this led to a so-called circling of wagons. Started by Buffalo fans Del Reid, Breyon Harris, and Leslie Wille, fans on Twitter playfully mocked Schefter. As was his right, Schefter blocked the troublemakers, but by doing so, cemented the beginning of a revolution in sports fan history. 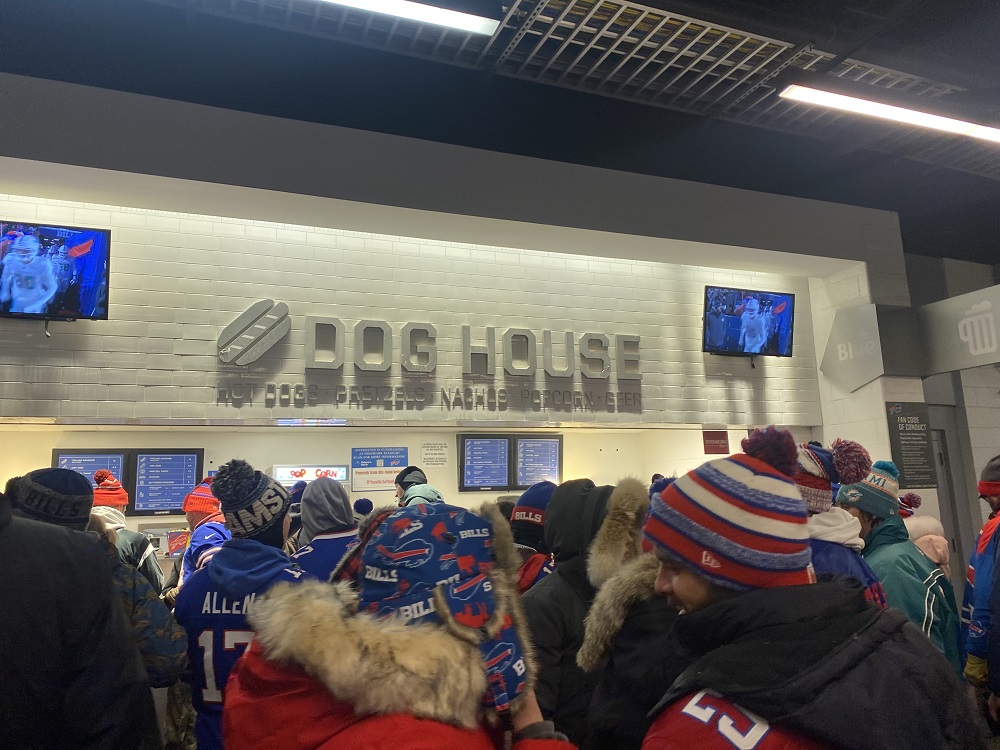 Because they were now the “bad guys” in the eyes of Schefter, Reid, Harris, and Wille were inspired to create #BillsMafia on Twitter. Initially, it was meant as an inside joke; the hashtag gained some popularity but remained relatively unknown. But then, in the Spring of 2011, things rapidly changed, launching Bills Mafia into a greater reality and atmosphere.

Linebacker Nick Barnett was a free agent in the Spring of 2011 and was looking for a new home to land in. At the time, he was choosing between fresh Super Bowl winners, the Green Bay Packers, and Buffalo. An active Twitter user himself, Barnett found and latched onto the Bills Mafia hashtag. This was one of several reasons Barnett eventually signed with the Bills, and fans welcomed him with open arms.

NFL teams don’t usually embrace fan identities like this one, and it took the Buffalo Bills a long time to do so. Their eventual embrace of Bills Mafia was slowed mainly by the loose association the name had with organized crime and the wild nature of fans who identify themselves under this banner.

Why Do Bills Mafia Break Tables?

The behavior of fans in the Bills Mafia is chaotic and hell-raising. No other fanbase tears it up entirely as Buffalo fans do. With the chaotic nature of being part of a passionate fanbase, so does the amplification of tailgating before games on social media. One prominent example of taking things to a new level is table smashing before going into the stadium for a game.

There was no definitive kickoff to the tradition of breaking tables during Bills Mafia tailgate parties. Some users claim it began sometime between 2015 and 2016 when videos of fans jumping on and smashing tables went viral. There’s still no definitive answer.

Regardless of how it began, table smashing is now a mainstream part of the Bills Mafia tailgate tradition. Buffalo fans will go as far as climbing cars and RVs to “pile drive” into plastic folding tables. Sometimes those tables are also on fire. It’s an insane ritual, one that inspires both shock and amusement.

What are Buffalo Bills Fans Known For? 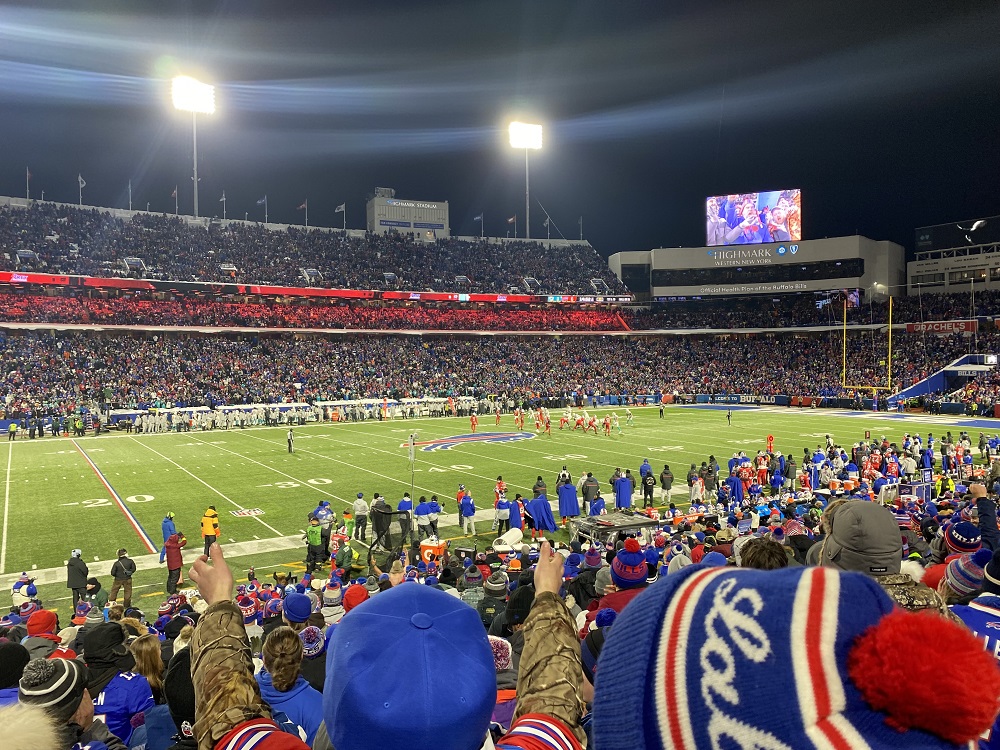 Apart from breaking tables, there are a few other things Buffalo Bills fans are known for. When it comes to tailgate culture and tradition, they have one other major practice. And it involves a guy dubbed “Pinto Ron.”

The Pinto Ron is a lifelong fan who has been lugging an old Ford Pinto to each Bills game. After cooking his tailgate meals on jerry-rigged griddles on the Pinto, Ron will approach a group of people and ask for condiments. With modified dispensers, these folks cover Ron in ketchup and mustard from head to toe. It is a wildly popular tailgating event that is nearly its own ticketed show at this point.

Apart from these antics, Buffalo Bills fans are known for their charity. They’re for sure a rowdy bunch, but they have big hearts. In the past, they have donated hundreds of thousands of dollars to nonprofits and charities. They’ve donated to pediatric cancer research. They donated to the children’s foundation run by Andy Dalton–quarterback for the Cincinnati Bengals–and his wife, Jordan.

When a Bills superfan passed away, they raised money for a student’s charity in his name. Del Reid, thttps://www.theringer.com/nfl/2019/9/26/20884655/buffalo-bills-mafia-tailgatehe OG #BillsMafia don, even donates a portion of his t-shirt sales to the charity as well. The Bills Mafia has a lot of heart to give.

Conclusion: What is Bills Mafia?

You might think the Bills Mafia is a crazy bunch. And you’re not wrong. But there’s a lot to this fan movement. As wild as their antics can be, these fans create a true community around their favorite football team.

What Makes Century Link so Loud?